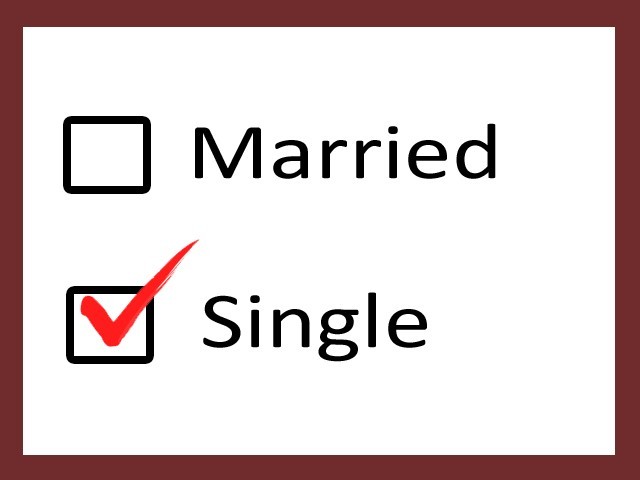 People assume that if you are a female and over 20 years of age, you must be receiving a long line of rishtas. Therefore, if you are not married, it’s your fault.

Sometime back, I was reading an article written by a woman about how she finally learnt to be single and ‘happy’ at the same time.

“Why do single women constantly need to declare that they are happy that way?”

To which someone else had replied,

“Because, whether directly or indirectly, everyone feels the need to remind them that they are single and assume that they are unhappy.”

I couldn’t have agreed more.

On a personal front

Most single girls my age will tell you, the words they dread the most coming out of anyone’s mouth are,

“Why aren’t you married yet?”

“When are you getting married?”

Unfortunately, if you are single at my age, there is practically no one out there, who will have mercy on you and refrain from asking these highly awkward questions. In fact, for me, these questions began pouring in when I was just 22. Even while pondering over career dilemmas, on occasions, the ‘kind’ advice I’ve been given is,

“You should just get married. Your life will be settled then.”

When people ask me – rather insensitively – why I am not married yet or when I will tie the knot, I feel like saying,

“Why don’t you just look for someone, eh? Keep yourself busy in the process.”

Apparently saying things like “I’m focusing on my career right now” are just not enough to satisfy them.

Many girls have taken a different approach.

To shoo away these Nosey Parkers I have heard many say,

“When I meet the right person.”

Sometimes they work, others, they don’t.

Unfortunately, none of these ‘deflectors’ as I’d like to call them, apply to me. My only answer is that, it just never happened for me and I don’t know if it ever will.

For people, I suppose, the assumption is that if you are a female and over 20 years of age, you obviously must be receiving a long line of rishtas. Therefore, if you are not married, it’s your fault. A lot of the times I feel like an alien because most of the girls around me do not face that dilemma; they are either married or have that part of their future sorted out by their parents.

Yet, I know that I am not the only one in my position.

There are many other single ladies out there, especially those who are older than me and nearing their 30s, who are reminded about how ‘lonely’ they will feel in their old age when they won’t have husbands and children to care for. Such women often have to face a barrage of painful questions and comments such as,

There was another article, about a year ago, which really moved me. It was about a woman who had always desired children but never found a life partner and having reached her 40s, she wondered if she could realistically foster her dreams. She described her situation as one of ‘disenfranchised grief’.

When explaining that she did not want to adopt or opt for artificial insemination, responses were often unsympathetic and many of her peers seemed to think it was her fault, that she did not try hard enough to get married and have a family.

While most people sympathise with couples who are unable to have children, the same could not be expected for someone who is single.

On the professional front

Apart from having people ask me why I am not married, or telling me that I’m too old and it’s about time, what probably makes me feel more insecure is the things I have heard others, both men and women, say about unmarried women.

Back in college, any unmarried teacher I had, who incidentally also had a bad temper, was branded as someone who was ‘frustrated’ and needed to find a man for her own good. In professional life, I’ve heard the same comments about women much older than me who don’t have husbands.

Is that really how shallow we are? That we assume any person who isn’t getting married, having sex and producing children, is somehow insane?

It can also, at times, be insulting when it is assumed that because I am not married with children, professional life is easy-breezy for me and all other single women.

Don’t get me wrong; I agree 100% that working mothers have a tough challenge before them. However, it should not be assumed that if a woman is not married, her professional life is automatically easier for her, or that she does not have her own set of responsibilities.

I have met unmarried women who are supporting their family and face a whole range of challenges of their own. At times, it is for this very reason that they do not end up getting married.

Besides that, work is work. It’s hard for everyone sometimes, albeit man or woman, single or married.

So, although you may not have cared for or agreed with a single word I’ve written, but in case you did, the next time you feel like prying into someone’s personal life and their enigmatic single status, how about being a little more sensitive and a little less nosy?

Sometimes, it’s really not as simple as putting on a ring.

A lawyer based in Karachi.