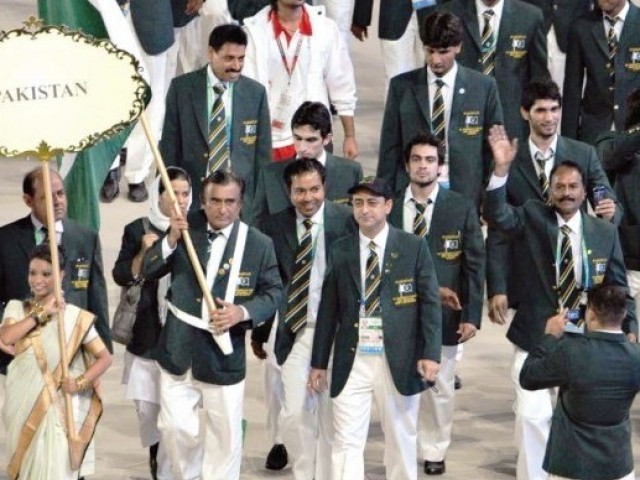 It was yet another embarrassing sports story for the Pakistanis when, on Sunday, the country’s delegation at the 2010 Commonwealth Games in Delhi decided to indulge in a tussle in the middle of the opening ceremony.

It is all very well for an official to have said that the matter of Sindh Sports Minister Muhammad Ali Shah robbing the nominated flag-bearer, weightlifter Shujauddin Malik, of the national flag, should be dealt with after the delegation returns home.

Millions of Pakistanis who bore witness to this incident on their television screens, however, had to deal with their personal sense of mortification and embarrassment there and then.

In a country where sports and politics dominate much of the discussions, both avenues seem to have given Pakistanis little joy over the last few decades. While the victories in the Sharjah Cup in 1986, the World Cup 1992 and the Twenty20 World Cup in 2009 continue to stand tall in the memories of not just cricket fans but Pakistanis generally, it may well be a case of holding on to what we have come to believe has been lost to us.

And while we were proud for a while with Aisamul Haq Qureshi’s graceful exit from the US Open doubles final, the emotion was shunned to one side with this new addition to Pakistan’s ever-growing list of public humiliations.

It comes as no surprise then, to be able to imagine that many Pakistanis have stopped believing in national heroes, be they athletes or politicians.

Similarly, many are taking former president Pervez Musharraf’s recent announcement regarding his re-entry into the political spectrum with a pinch of salt as well.

Most of us, who condemned the former army chief for ending his somewhat progressive rule with a tangle with the judiciary, are hesitant to retest our belief in his ‘reformed’ ideals.

With this growing sense of disillusionment and a hesitance in trusting ideals that appear to be short-lived at best, one wonders if we will ever be able to find national heroes again.

A graduate of the Indus Valley School of Art and Architecture. She spent a few months teaching English to grade 7 before she found her calling and joined The Express Tribune where she works as a sub-editor on the Karachi pages.

WikiLeaks: Gossip on a global level

Too scared to be happy?