Aids is a real disease, get out of your ‘conservative’ bubble and believe it! 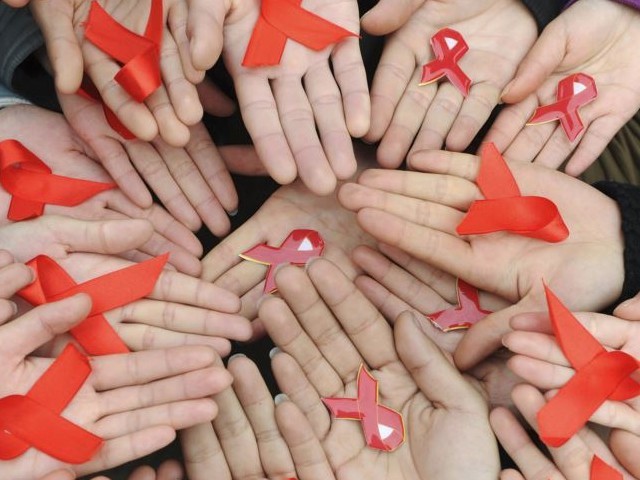 In a country like Pakistan, social taboos, stigmas and social fears prove to be more dangerous than HIV/AIDS itself. PHOTO: REUTERS

There is no cure or vaccine for the virus and prevention is the key strategy to control the spread of the disease, primarily through safe sex and needle-exchange programs. However, anti-retroviral treatment can slow the course of the disease. Raising awareness about AIDS is a big issue, especially in Pakistan, because this is still considered one of the biggest social taboos in the country.

I remember just last year the media reported that 15 blood donors screened in Badin were HIV positive. As the news spread, there was an atmosphere of fear and suffering among the people of the district.

HIV/AIDS is still a stigma here in Pakistan and there are two factors behind it. The first is our society’s approach. As a society we are still in a state of denial about the huge prostitution industry in the country. These issues are not discussed openly and we blame it on a ‘conservative’ mindset, choosing to label such issues ‘vulgar’. Until we are faced with harsh consequences, we live our little bubble of denial.

Take for instance, the condom ad aired  a few months ago starring Mathira. This initiative should have been commended and appreciated since protection during sexual intercourse is a vital component of safe sex. However, as expected, the content outraged viewers, so much so that the PEMRA had to eventually ban the ad.

The second factor is linked to the first one. Considering our society’s conservative approach and reactions, our inept and inefficient leadership remains mum over legislation against discrimination against people suffering from HIV/AIDS.

Despite this, Pakistan is a signatory of the Declaration of Commitments on HIV/AIDS, Millennium Development Goals (MDGs) targets and the Political Declaration on HIV/ AIDS which requires governments to develop national HIV plans including laws and regulations to eliminate discrimination and guarantee human rights for people living with HIV; and to develop strategies to combat the stigma and social exclusion connected to these epidemics.

In a country like Pakistan, social taboos, stigmas and social fears prove to be more dangerous than the disease itself. Unfortunately, our country has moved from the first phase of ‘low prevalence’ to the second phase of ‘concentrated epidemic’.

The second phase of a concentrated epidemic is when the proportion of infected people in any high-risk group rises more than five per cent. Thanks to the state of denial of our society, there are currently more than 100,000 known cases of HIV/AIDS in Pakistan. Data from various researches suggests that the trend of concentrated HIV epidemic among key affected populations in Pakistan continues to be driven by People Who Inject Drugs (PWID) exhibiting the highest HIV prevalence at 37.2%. This is followed by transgenders and male sex workers (MSWs) at 5.2% and 1.6% respectively.

Among the key affected populations identified, female sex workers (FSWs) exhibit the lowest prevalence at 0.6% while the geographic trend of the epidemic shows its beginnings in major urban cities and provincial capitals and then expanding over time to smaller cities and towns.

Moreover, due to the fear attached to such a subject, we may not even be aware of unreported cases of HIV/AIDS in Pakistan. For all we know, this figure might be in millions. In addition, detection of the infection is particularly challenging when very low levels of the virus are present in the blood. This is known as the ‘window period’ – the time between being infected with HIV and the ability of a test to detect the infection.

Considering Pakistan is already in the second phase of the epidemic and so many cases are likely to be unreported, the need of the hour is to raise awareness. Our celebrities, legislators and health professionals can play a vital role in spreading awareness before HIV/AIDS kills our country.

But before that, we need to educate ourselves. We need to know and understand what we can do to protect ourselves from HIV/AIDS. This can be done by making sure that condoms are used with non-regular sexual partners, undergoing timely treatment of STIs when symptoms are present, obtaining knowledge about the link between STIs and HIV, use of sterile syringes for all injections, reduction in the number of times we use injections, voluntary blood donation (particularly among the age groups of 18 to 30), using blood for transfusions only after it has been screened for HIV, and display of tolerance and care towards people living with HIV/AIDS.

Our motto for this year should be,

“Kill the stigmas before HIV/AIDS kills you, your partner and your country!”

Understandably, these are tough challenges. But this is our country and it is our duty to make it beautiful, strong, healthy and free from diseases; including unnecessary social taboos and stigmas.

Veena Malik and her never-ending 'dramas'