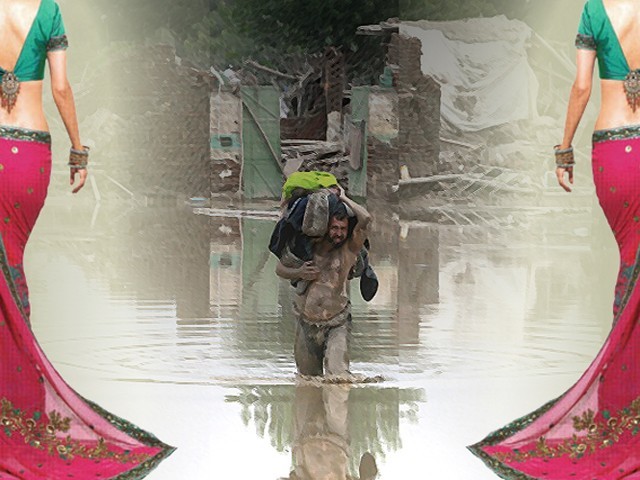 We only catch glimpses of those suffering at the hands of natural catastrophes. IMAGE: EXPRESS/FILE

Did you know that the estimated number of Internally Displaced Persons (IDPs) in Khyber Pakhtunkhwa (KPK) and the Federally Administered Tribal Areas (FATA) is around one million according to the United Nations High Commissioner for Refugees (UNHCR)?

Did you know that another 1.5 million were affected by floods this year according to National Disaster Management Authority (NDMA)?

There are 1.2 million people in Pakistan urgently in need for winter items this season.

I am quite sure that most people are unaware of these statistics. This is because the content on TV channels is driven by sensationalism which is essential to win the ratings race. Hence, we only catch glimpses of those suffering at the hands of natural catastrophes and these tiny glimpses quickly give way to video clips of raunchy Bollywood item songs being used in headlines for that extra pull.

Although television in Pakistan remains the most popular medium for the dissemination of information, it is simply horrifying to see the shift towards content that attracts audiences by catering to the lowest common denominator, rather than providing information contributes towards a better society.

What is also troubling is the widening gap that this trend is creating between stories that need attention and journalists. This is how issues begin to escape a journalist’s attention. Even though aid agencies might be doing a tremendous amount of work to help people in areas afflicted by war or natural disasters, these aid agencies are dependent on journalists to spread the word by screening the reality of the disaster at hand.

After the unprecedented floods of 2010, I visited Daira Deen Panah, in South Punjab to cover the devastation wrought by the floods. A volunteer working with the reconstruction efforts got me in touch with a woman named Ameer Begum. I can still visualise Ameer Begum’s eyes spilling with tears as she told me how the local landlords had made her and her young daughters forcefully flee higher ground since they wanted shelter for themselves after the floods hit the area.

She was left with nowhere to go. Her face, when she told me her story, replete with tears and anguish, is something I have never managed to forget.

I covered her story as well as others like her and although I knew that my report would not bring any immediate changes, I took some satisfaction in knowing that I had at least helped in relief and reconstruction by giving a voice to those suffering.

Another factor that delays relief efforts is that when an emergency strikes, the first 24 hours are crucial for response, but unless the government announces the disaster as an emergency, the chances of drawing attention are low.

The Attabad Lake crisis of 2010 is another example where media response was slow after the catastrophe hit and thousands were left to suffer because of the remoteness of the area. As a result, it took a while before the mainstream media began covering the disaster.

It is true that newsrooms today have to manage their own dynamics and journalists work under constraints beyond their control. However, journalists can still improve how they pitch stories about humanitarian issues to the newsroom. The numbers that they receive in press releases about victims in need should be analysed and interpreted so that these statistics can be turned into useful information. This information should then be used to raise pertinent questions.

I am sure that some may counter this approach with the argument that the job of a journalist is to provide information and not analyse or educate. However, being part of an ever-evolving world, what is the harm in educating and empowering the downtrodden? Would it hurt to put in the effort if it were to help someone?

With the cooperation of local authorities, journalists could accompany relief workers in order to augment the aid and coverage efforts. In this way, the media could gain access that relief workers have to far-flung disaster-hit areas. This would also take care of logistic issues and funding problems that media outlets encounter at the time of such emergencies.

It is imperative for journalists to be trained and equipped with the necessary skills to get their stories across faster using the great number of tools available in this age of new media.

At the end of the day, the beneficiaries would be the poor victims of landslides, floods and earthquakes, waiting for the world to take notice of their plight. However, for such endeavours to be accomplished smoothly, it is important for the government, aid agencies and the media to join hands for the common goal of educating the public and advocating for humanitarian causes.

Although these bodies have carried out efforts for the rehabilitation of disaster victims, these efforts have been too disjointed, sporadic and delayed for any sustainable improvement in the condition of the unfortunate victims.

With the number of disasters that this country has seen in recent years, organised and collaborated efforts by the government, the media and aid organisations is the need of the hour, otherwise the statistics quoted at the beginning of this piece will continue to spiral upward.

If you can’t convince someone else to do it, at least play your part. The smallest of efforts can save the lives of hundreds of victims.