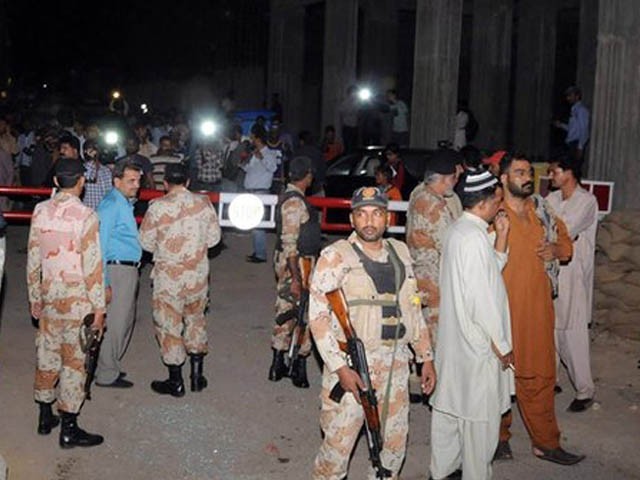 Security personnel on the scene of the attack after the miscreants had dispersed. PHOTO: AFP

1. The fear. The fear that whoever is chucking grenades and has been firing bullets for the last 10 minutes is about to enter the building. Should I be hiding under my desk? Or should I be leading my team somewhere? Or should I follow my gut and run screaming up and down the hallway?

2. Watching your colleagues run terrified out of an emergency back exit, only to hear another hail of bullets echo in the dark street outside the office. The anxiety as the door they ran out of is slammed shut by those panicking inside.

3. Crouching low and kicking yourself multiple times for not listening to your wife when she came to pick you up at the end of your eight-hour shift — exactly 30 minutes before the attack. Why, oh why, did I prioritise that damn meeting about year-enders?!

4. Trying to dial the wife with shaky hands. Have her not pick up for that emotive ‘I’m-fine-but-if-this-is-the-end-then…’ spiel. Dial the driver to learn he’s parked right outside and loving the action.

5. The crush. People everywhere, from departments I’ve never heard of cussing us journo types, because hey, that dude on the marketing team is pretty sure we aren’t being attacked by an irate consumer goods brand team that’s upset about ad placements.

6. Turning to the TV in panic to see the Express News anchor taking an audio interview on the situation from…Maya Khan.

7. The (lack of) coverage by our comrades in arms, the other private media groups. Nothing stings quite like being referred to as a ‘nijee (private) company’ facing a ‘cracker blast’ near the Qayyumabad area, or being reduced to two tickers. Isn’t there a line drawn somewhere beyond which media rivalry ends? Isn’t it time to drop the (rather silly in this day and age) policy of not naming competitors?

Really strange to see that several TV channels are not even bothered about attack on @etribune. They need to unite here #Pakistan @jhaque_

8. Returning to the desk because the team has already got live updates going on the site and need my assistance. Also, the blog desk head wants me to vet and release a blog on Mustafa Kamal…

9. Finding out I’ve finally made it to the BBC. For the wrong reasons.

10. Showing up to work the next day, because well, that’s what journalists do.