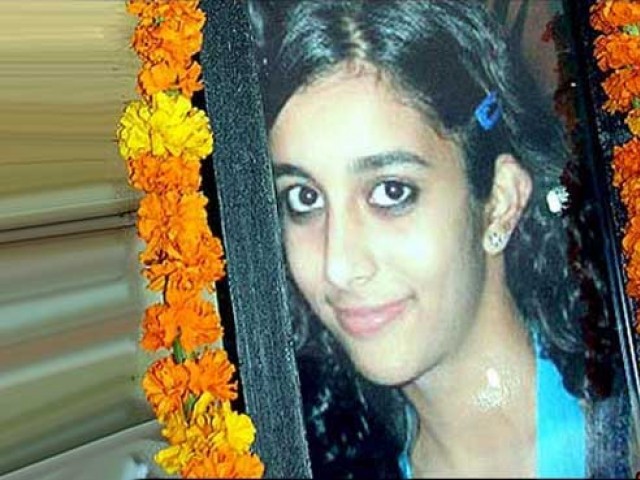 Aarushi Talwar ended up as the worst casualty of an entertainment hungry society that is prepared to compromise every principle in favour of a good, spicy story. PHOTO: REUTERS

It took India’s top investigative agencies five years to figure out how 14-year-old Aarushi Talwar was murdered in 2008. Then, instead of giving the public all the evidence present, they shaped Aarushi’s killing according to their whim and fancy. Crucial findings were discarded while other evidence was tampered and moulded to tell the world that Aarushi was a victim of honour killing by her incensed parents, who clubbed her to death on seeing her in a compromising position with the male domestic help.

On the night of May 15, 2008 Aarushi and her household’s domestic help, Hemraj were violently murdered. Aarushi was discovered dead in her bed by her parents the next morning.

The ensuing investigation saw the Central Bureau of Investigation (CBI) disregard the testimony of three men who confessed to being inside Aarushi’s house on the eve of her death. Krishna and his two accomplices agreed under a narco analysis test that they had gone to the Talwar residence to meet Hemraj, downed one too many alcoholic drinks, talked about Aarushi and then entered her room to abuse her. When a scuffle followed, Aarushi was killed. Moments later, in a drunken fight outside on the terrace, Hemraj was murdered as well.

To confirm their testimony, Krishna’s house yielded a possible murder weapon, the sharp, blood stained khukri that he acknowledged as the murder weapon. Additionally, authorities also discovered a pillowcase in his house streaked with Hemraj’s blood.

Yet, Krishna and his two fellow murderers walk free today. Aarushi’s grieving parents on the other hand must spend the rest of their lives behind bars, after losing their only offspring.

If you’re wondering how India’s authorities managed to overlook every piece of crucial evidence to confirm Aarushi’s parents as her murderers, you are one of many incensed, helpless on-lookers. The CBI found the testimony of Krishna and his friends to be inadequate, citing brain-mapping and narco tests inadmissible as evidence. Instead, they kept on harping about Aarushi’s immoral sexual relations with Hemraj as the reason why her parents killed the two. Protests by Aarushi’s friends and family against the breach on Aarushi’s honour and character fell on deaf ears.

To dispel any trust the Talwar family had left for them, the CBI acknowledged that they had tried to influence the part-time household help, Bharti into supporting their case against Aarushi’s parents. Bharti started off saying that the Talwar residence was locked from the outside, confirming that the murders were done by someone from outside the household. During the trial, Bharti changed her testimony midway to say that the door was locked from inside and Aarushi’s mother had opened it to allow her in. On cross-examination, Bharti admitted that the CBI had asked her to change her story.

Ironically, Aarushi’s death was only a fraction of the loss her parents were forced to endure. Their grief is split into two parts: sorrow for their daughter’s murder, and sorrow for the betrayal of their own Indian community.

As the Talwars desperately sought justice, the Indian media decided to turn the killing of their child into the country’s prime source of entertainment. According to Aarushi’s mother,

Indeed, in a society famed for its film and drama, there seems to be a great deal of confusion between real life and stories on television. A prime-time television drama inserted a twist in their story, showing a rebellious 16-year-old girl murdered by her father. In the meanwhile, the rest of the media craved police leaks, turning a tragic murder into fodder for stories about extra-marital affairs, incest, wife swapping and honour killing. Aarushi ended up as the worst casualty of an entertainment hungry society that is prepared to compromise every principle in favour of a good, spicy story.

Even before the CBI slammed the case shut out of frustration with their own inefficiency, putting the blame on Aarushi’s parents, the Talwar family was disappointed in their society, their country. A member of Aarushi’s family confessed,

“Before Aarushi’s murder, India was a magical place for me, despite its flaws. Since then, it has become intimidating. I once cherished my pride in the country. I now grieve the loss of that pride.”

Our law agencies have a long way to go before they can promise any kind of justice. In the absence of any formal institution we can trust, we will spend our lives fighting our battles by ourselves, without any government to rely on.

Most heart breaking, however, is the fact that the very community we live in can betray us. People we consider our own because they look like us or talk like us or identify with the same nationality or religion as us can turn their backs. They can turn our grief into their entertainment. They can use it as convenient material for gossip and ridicule.

Aarushi Talwar will live in India’s memory as an instance of magnanimous failure for the investigative agencies. More than that, she is a symbol of a society that is so disillusioned and frustrated that it may have lost its most important values.