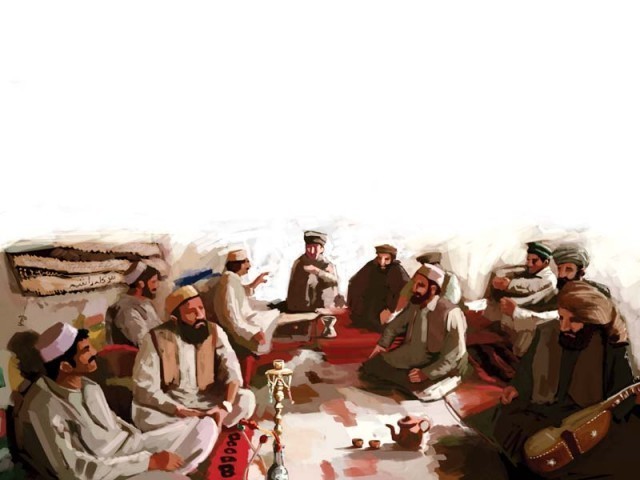 A Pashtun hujra was not just a social gathering. As the conversation flows, it gives all its members exposure to people, politics, current happenings and global affairs. ILLUSTRATION: JAMAL KHURSHID

There are many characteristics of Pakhtun culture and a hujra is one of them. In fact, it is considered to be the most important part of Pakhtun culture. A hujra can be loosely translated as a social club. From the western mountainous terrains of Pakistan to the heart of Afghanistan to anywhere in the world where Pakhtuns live, there exists the hujra.

Exclusively for the male population, a hujra plays host to various aspects of the social life of Pakhtun society – from resolving community disputes to wedding ceremonies. However, the very existence of this age-old tradition is now threatened due to modernisation and Western democracy.

Purpose of a hujra

A typical hujra is owned and run by a tribe. The more affluent members of the tribe contribute more funds in setting up and maintaining a hujra. A man can enter a hujra at any time of the day, month or year and be sure of getting safety, food and shelter. No questions are asked from the guest until he is taken care of and served the best food. It is only after he has been adequately fed that the members ask him how they can help him and assure him that he can stay as long as he wishes.

Hospitality is considered the pride of a Pakhtun and this is why everyone in the tribe tries to serve the guests in the hujra. This is evident from the fact that there are no hotels, motels or inns in the area. And the Pakhtuns consider it to be a matter of shame if a guest leaves a hujra without being treated with utmost respect and served the best food they have to offer.

Origin of the hujra

Some historians suggest that Pakhtuns descend from the Greek and nothing supports this argument more than the institution of hujra. Similar to the Athenian democracy, Pakhtuns have a system of democratic decisions and the hujra serves as a state council for the tribe. Whenever there is a dispute, the masharan (council of elders) convene a meeting of the jirga members. All and sundry are invited to attend the proceedings of the council. All disputes are usually resolved through this council other than the crime of kidnapping or elopement.

The hujra tradition also has a close similarity to the Aristotelian Lyceum. It serves as a school of academic as well as practical knowledge. Since different members of the tribe have different occupations and life experiences, they share these with the rest and thus, the body of knowledge is transferred from generation to generation. If you ever visit a hujra, don’t be surprised if you find people who have never been to school in their lives, discussing medicine with striking accuracy. And the next day you might see the very same people discussing the secrets of doing business and even forecasting the weather.

I remember how my grandfather, who had never been to school, once asked me about my research on medicinal plants. I gave him a vague reply since I was not sure myself. He then narrated a detailed account of how they could make herbal medicines for curing diseases like malaria. When I returned to my hostel and read my books, I was astonished to see that his explanation was perfectly accurate.

The bare essentials of a hujra consist of charpais (rope-woven beds) with one or two pillows on them, instruments of folk music of which the rabab is a must. In addition, a hookah or cheelam is found in almost every hujra. Many bachelors of the tribe reside in the hujra permanently.

Every night, when all members are together, the Tang Takor music starts after dinner. Every tribe has singers and experts who specialise in particular musical instruments. They sing folk songs which mostly revolve around love, courage on the battlefield and praise for martyrs.

With such regular and dedicated patronage of music seen in hujras, it is ironic that the music profession is considered a stigma among Pakhtuns. As Ghani Khan puts it,

“Pakhtuns love music but have contempt for the musician.”

Education in the hujra

I had been a regular participant in these gatherings until I moved to a hostel for my education. The hujra that I attended used to have a building which was erected in pre-partition times. Every evening after evening prayers, the elders would take note of everyone attending and would ask about those who were absent. We wouldn’t begin dinner until each and every one was present.

Once everyone was present, we would all sit on a dastarkhwan (table-spread laid out on the floor). There was no distinction between anyone, whether they were a peon or a professor. And nobody could leave until everyone was finished with the meal.

After dinner, everyone would discuss how their day had been over a warm cup of qahwa. We would discuss any topic under the sun from global politics to village life and even seemingly trivial things like how to treat your ailing pigeon.

A hujra was not just a social gathering. As the conversation flowed, it gave all its members exposure to people, politics, current happenings and global affairs. It is said that no matter how much formal education people received, if they were not regular participants at a hujra, they would not hone their social skills.

Paving the way for modernisation

Times, however, have changed and like everything else, the institution of hujra is getting severely affected by this tide. The implementation of Western democracy and the judicial system has eliminated the role of the hujra as a council and court. Although scattered, hotels and restaurants have emerged and are proliferating in the area, taking away the hospitality factor from the hujra. With the advent of cable television, people usually stay in their homes and even if they go to the hujra, they are glued to the television even there and hence, there is no transfer of knowledge. As the youth venture out to bigger cities for better education, they are deprived of attending and socialising in hujras.

Thus, community-run hujras are becoming rare by the day. The ones found today are mostly owned and run by affluent people, primarily politicians. Hence, the people found in these kinds of hujras are those who seek some form of monetary reward or the owner’s favour. So the hujra – where once the rich and poor were treated as equals – is now dominated by the rich while the poor seek the blessings of the influential if they want their kids to get good jobs or recommendations.

Traditional hujras are now restricted to the tribal belt of Federally Administered Tribal Areas (FATA) and unfortunately, an institution which survived all kinds of stresses during its life is now on the verge of extinction.

Only the future will tell whether we gained or lost by the abolition of this system. But we can be sure that an essential part of Pakhtun culture is rapidly going into oblivion.