Egyptian verdict: They gave her 11 years in prison, she gave them a beautiful, victorious smile 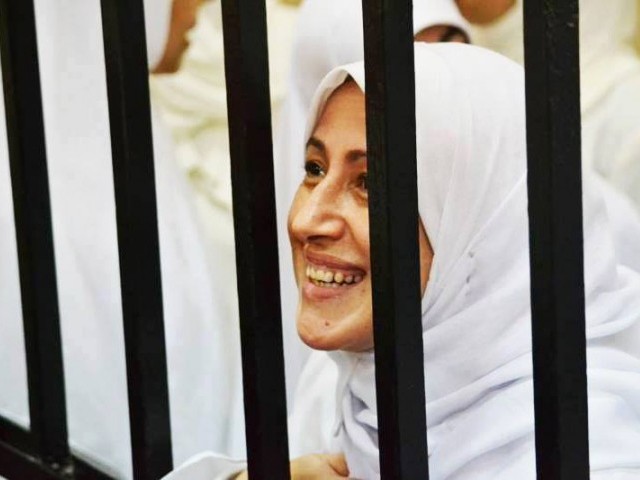 As I scroll down my Twitter feed, a smile captivates me. The face had thousands of words, endless thoughts and most importantly tranquillity of soul. She isn’t a celebrity or a popular activist rather a girl next door, who wouldn’t be noticed in normal surroundings.

Caged in an Egyptian courtroom with 20 others like her, she received an 11 years sentence for her crimes. The gravity of their offense lay in treading the forbidden path – ‘challenging dictatorship’ – a much greater sin than eating the apple.

These young women, all in their teens and tweens, rounded up late last month were tried, be it in a partial court, for protesting against General Abdul Fattahal Sisi. They will be spending the prime of their youth behind bars.

Earlier military, judiciary and other remnants of Hosni Mubarak’s dictatorship, along with opposition factions, had ousted President Mohamed Morsi by military’s support. The elected President, called a ‘civilian dictator’ by these groups, was deposed and Egypt experienced turmoil.

According to news reports the Egyptian Cabinet issued a strong statement for implementing the anti-protests law ‘with all firmness and force’ to prevent ‘freedom turning into chaos’. They went on to link it to war on terrorism and finished with,

“There are elements that want to spread domestic chaos in a desperate attempt to hurt the prestige of the state.”

The defence lawyers were shocked as they didn’t expect such harsh verdicts, especially when four of the 21 women were in their teens and as young as 15. They were convicted on multiple charges, including holding demonstrations, sabotage and using force.

This isn’t the first sentence carried out by Egyptian courts for the pro-Morsi protestors who were arrested after their month long sit-in. Morsi’s election, oath, reinstatement of parliament, confrontation with judiciary and his ouster by the military are topics for some other times.

This moment is about Ibtesam, the smiling one, that is what I would like to call her as her real name is unknown and is relatively unimportant, for that smile in the face of adversity is remarkable. You don’t have to be an Islamist or a left-leaning liberal but only an activist to know the true value of the calmness, the beauty of the sparkling white teeth and seamless forehead.

They are guilty alright!

Yes they committed a heinous crime.

They stood up; they acted and got caught red-handed for challenging dictatorship, a crime which invokes similar punishments globally. The interesting thing about this sentence is its timing, coming in as the Global women rights activists are campaigning for ‘peace at home, peace in the world’ by calling a global condemnation of militarism and violence against women.

How would the international rights activist react to this is beyond me, but tomorrow the right-leaning Islamists desktop jihadists will have gone barmy. There will be a sizable majority that will gaze at her saying, “sanu kií” (what’s it to us) and another group that will insist that she deserved much worse.

The funniest part is that the Islamists, who for the most part have aided military dictators, have benefitted immensely during these turbulent times of Pakistan’s existence. Their opponents the left-leaning liberals, comprises of people who may have been at the receiving end and undergone similar treatment at the hands of military regimes which have ruled Pakistan for half of her independent life.

Irrespective of our maddening circus, which is not limited to social networking sites, Ibtesam had received her sentence with a smirk as if telling her prosecutors that they may lock her up but they can’t bend her spirit. Such fabulous power of spirit is a rarity these days.

Ibtesam’s deafening grin nullified the brute force exercised to disperse, terrorise and prevent anti-coup protests by the military regime. So early in her life, she has reached the pinnacle of activism. She embraced the verdict as if she has reached her destination, achieved her goal or, more appropriately, a reward far greater than any commemorative medal.

One can always question her crimes, her motives, even disagree with her principles and reject her ideals but no activist can disagree with the strength of her belief, the courage of her heart and the sincerity of her soul. It takes all that and a lot more to tackle an adversity such as her, with calm composure and a beautiful smile.

A marketing major who has worked in the fields of marketing research, public relations and advertising. He writes on societal issues and changing mindsets. He tweets as @rehanaliz (twitter.com/rehanaliz)

“How much do you earn? What car do you drive?” – Money has never talked this loud

No Father’s Day for you Papa

Bajee: I only realised her importance after she left...