On the 5th anniversary of the Mumbai attacks, let us take an oath 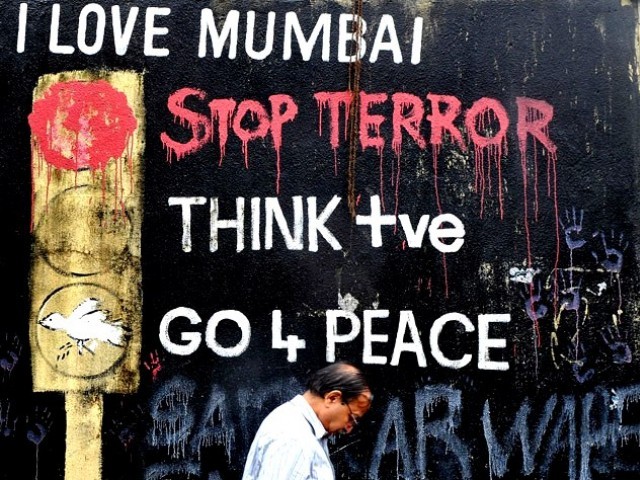 The sense of pride for one’s country should not overrule the dignity of being a human being first. Human lives are precious regardless of their nationalities and religion. PHOTO: AFP

Five years ago, it was the worst of times for my neighbouring country. Mumbai, India’s commercial hub was under attack. The eve of November 26, 2008 was one of the bloodiest days for India. When the calendar marked November 29, the death toll exceeded 100 people.  Everything was deplorable. The entire Indian nation was mourning and rightly so.

It was the worst of times for my country as well, as the whole Indian government and the media turned hostile towards Pakistan and built war hysteria. The attackers were reported to come from my soil. This was a shocking revelation.

The after-effect of this incident was equally devastating.

Amidst the highly tense situation between both the countries, Indian fighter jets violated Pakistan’s air space just a day before the British Prime Minister’s visit to Pakistan. Fingers of blame from India were pointing towards Lashkar-e-Taiba (LeT). India started talking about surgical strikes in Pakistan, something which itself was an act of war.

Later, the government of Pakistan, after thorough investigation, acknowledged that the Mumbai attacks were partially planned on its soil by non-state actors.

The rest is history.

At the fifth anniversary of the devastating incident, what is termed as India’s 9/11, here is what I, as an ordinary citizen of Pakistan, have learned:

The sense of pride for one’s country should not overrule the dignity of being a human being first. Human lives are precious regardless of their nationalities and religion.

As long as global political disputes are unresolved, the world will never be a safe place to live.

These disputes have fuelled militancy and provided an excuse to non-state actors across the world to lift arms and launch so-called ‘jihad’.

The Kashmir dispute serves as the same unholy excuse for the rivalry between both India and Pakistan. The water dispute linked with it is another serious issue that adds its share in the ongoing animosity between both the states.

We must work together to resolve all such disputes and, must look towards building a peaceful environment for our coming generations. If there is no progress towards the right direction, non-state actors will keep playing their dirty role, be it the incident of Mumbai or that of Samjhauta Express.

War is not the solution, even as the last resort.

War between two nuclear states would be catastrophic and in essence, shear madness. We should accept each others’ realities, sovereign equality and move towards confidence building measures to ensure peace and harmony.

States should resolve their matters directly and non-state actors should not be allowed to hamper the relations between the two nations. We need to strengthen our internal security instruments and curb the enemy within before looking to make more outside.

In times of turmoil, a strong and visionary leadership keeps the morale of the nation high. After the Mumbai incident, I found the former lacking. Moreover, the government and the military must work in unison.

Democracy and diplomacy is the way forward. In the aftermath of the Mumbai incidents, Pakistan had to struggle on the diplomatic front. The philosophy of ‘co-existence or no-existence’ demands that we strengthen our ties with the rest of the world. International isolation is fatal for the future of any country.

Let bygones be bygones. Leave the bitterness of the past behind. We need to think of peace. As written by former President Pervez Musharraf in the guestbook of Bangladesh’s monument of independence,

“Courage needed to reconcile and compromise is far greater than that needed to oppose and confront.”

Both the nations must show this courage and shake hands. Their welfare and well-being depends on mutually cordial relations.

The world must also remember that Pakistan has been fighting the global war against terrorism for more than a decade and has sacrificed over 50,000 precious lives. This should not go unsung. The international community needs to support Pakistan, not just by acts of charity but for the global cause of making this world free of terrorism.

A stable Pakistan is in the interest of the region, India as well as the world.

This is a time to rectify the mistakes, instead of unearthing skeletons of the past. We should not buttonhole ourselves in blame games and harbour distrust anymore. The more we do that, the deeper a grave we dig for ourselves, the generations to come and eventually the world.

Let us take an oath today, in remembrance of the lives lost in the Mumbai attacks and those lost everyday in Pakistan, to defeat terrorism and truly give peace a chance.