What do JFK, ZAB, Imran Khan and Rahul Gandhi have in common? 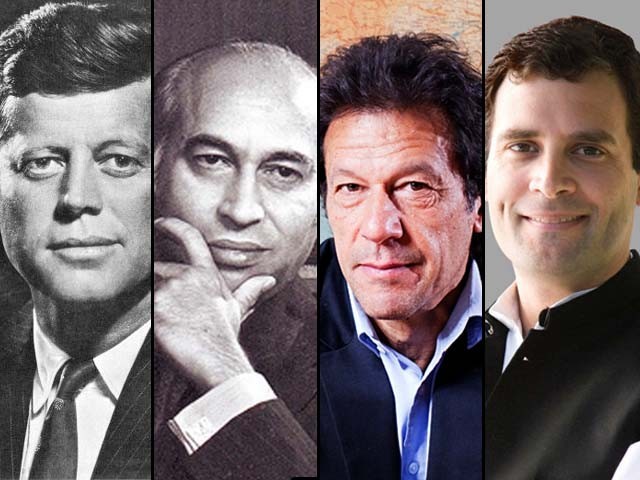 Kennedy’s rise to fame, based on his looks and persona, is not a unique one. Even in our history, politicians have often been chosen because of how they look or how well they speak.

While the western media – the American media in particular – mourns on the day, giving it more coverage than the death anniversary of any other American president, aided by public gatherings at different Kennedy monuments throughout the US, a question comes to the mind of an outside observer:

Does Kennedy really deserve such exuberant treatment, even after 51 years of his death?

True, Kennedy was amongst those US presidents who died while in office – but he wasn’t the first. Seven other American presidents have died while they were holding office before him. Similarly, Kennedy, popularly known as ‘Jack’, wasn’t the first US President to be assassinated either. Abraham Lincoln, James A Garfield and William McKinley were all assassinated before him, while holding office.

So what is it about Kennedy that still attracts not only Americans, but people from East and West, young and old alike – for whom more than 40,000 books have been written since his assassination?

What were the achievements that made him stand out, over and above the other presidents?

Today, while Americans praise him for successfully solving the crisis in late 1962, and steering the world out of a possible nuclear attack, critics also point out that anyone in his presidential capacity would have done the same and made necessary attempts to avoid the confrontation. The world had already witnessed two big wars, not very long ago. So a confrontation was not at all an option.

However, if there was any blunder that one could make, it was made by President Kennedy himself, who supported the invasion of Cuba at the Bay of Pigs in 1961 in the first place and, as a result, created the domino effect that led to the crisis.

So what was it about him that clicked with everyone?

I am neither a historian, nor a critic of history; however, being a keen student of psychology, I can make a simple psychological analysis: We love what looks attractive. And yes, President Kennedy attracts all of us.

If being the youngest elected president ever is an achievement, then yes, Kennedy did achieve something. Young and accomplished, with excellent oratory skills (remember the ‘Ich bin ein Berliner’speech?) and mostly accompanied by his young, beautiful wife, Jacqueline, Kennedy was the true face of the American dream. It comes as no surprise that the Americans were in awe of him and were even intimidated by him, regarding the Kennedy family as ‘America’s own royals’.

But Kennedy’s rise to fame, based on his looks and persona, is not a unique one. Even in our history, politicians have often been chosen because of how they look or how well they speak.

When Zulfikar Ali Bhutto, the young and talented foreign minister of Pakistan at the time of President Field Marshal Ayub Khan (a military dictator), realised his impact and political potential, he found a way to use it effectively and become a leader of the masses. Although his achievements as president and later as prime minister of Pakistan are many, he is remembered even today because of his excellent oratory skills — which stimulated the masses, young and old, urban and rural altogether — and his unjustified death at the young age of 51 rendered him immortal in the pages of history.

Of course, one cannot omit Imran Khan from this list. What is it about him that awes and amazes us today? To be fair, he hardly has any governance experience. He comes with a right-wing political agenda in the face of ongoing extremism that engulfs us today.

So what is it that attracts millions of young Pakistanis, who see hope in his words and promises?

The answer is not rocket science. Imran’s persona attracts us all; and why wouldn’t it? He is a good looking Oxford-graduate who represented Pakistan in cricket, and became the first and (so far) only Pakistani captain to honour the country with a World Cup. Then, he involved himself in philanthropic works and got international acclaim — certainly some positives. He is currently the most popular leader in the country, because he knows what to say and how to say it. He knows how to make people hope for something more.

The notion of ‘Naya Pakistan’ may be idealistic and even radical, considering how ideas of providing offices to Taliban representatives have floated around, asking masses to start a civil disobedience movement to destabilise the government (read: the state) and asking overseas Pakistanis not to send remittances home to mention a few, but who cares? As long as the youth buys it in the name of an ‘honest person’ like Imran, it’s a win-win.

This attitude can be found in India as well.

The example of the Gandhi family across the border is no different. People respected Indira Gandhi more because of Nehru’s legacy and less because of her own political achievements. Similar was the case with Rajiv Gandhi who initially became popular as a part of family legacy.

The same, however, cannot be said for Rahul. The popularity that this young politician has, to a large extent, can be attributed to his good looks as well. While he might come across as an educated, good looking Indian politician, the people of India seemed to have rejected him and his party – what he lacks is oratory skills. So until the next elections, Rahul will really have to do something big in order to prove his worth – perhaps he can take a few tips from Imran Khan.

When it comes to making political decisions, nations have become more aware (and responsible), however, first impressions, personalities, charisma and making unconventional headlines still matter, to this day.

John F Kennedy remained in office for two years and nine months (approximately), but his achievements, in reality, are few – enough even to be counted on our fingers tips. Yet his assassination tells a tale of an unfinished story, full of youth, passion and determination. Certainly, his appearance reflected the same.

Culturally we could be different as nations, but I wonder if all nations think alike when it comes to choosing charisma as a synonym for leadership, perceiving as it shows, with hardly any depth. Whether we like or not, good looks and charisma definitely have a part to play in politics.

Raw and poignant, A Place for Us beautifully sheds light on familial love

Book Review: 'Servants of the Goddess, the modern-day devadasis'

Intolerance in Ramazan: A new phenomenon or a revision of Zia's era?