Pakistan’s soldiers: The sons of our soil 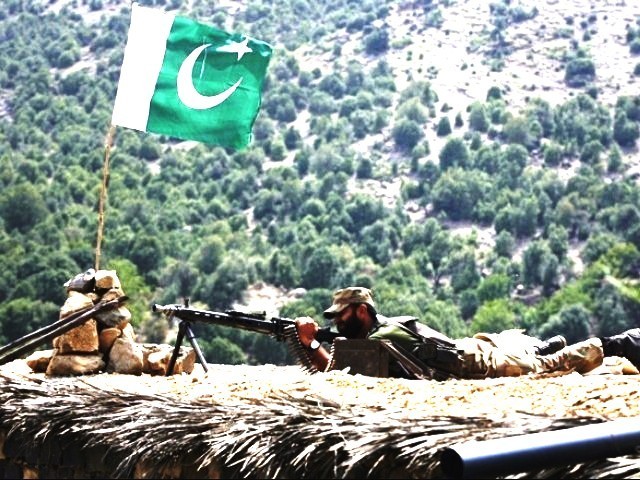 Pakistan is not merely a country for its soldiers. It is our determination to look the enemy in the eye with such valour that he dares not set an evil glance on our borders. PHOTO: REUTERS

Since 1984, the Pakistan Army has been fighting a war on the highest battlefield of the world, the Siachen Glacier. Although there have been periods of temporary ceasefire, they have always been followed by severe aggression from both sides.

During one such hostile period in 1987, a high altitude post of the Pakistan Army at the Siachen Glacier was commanded by my uncle who was then a captain. He had been there for five months and had no hope of being relieved in the near future because of the escalated tensions and harsh weather. One day he was sitting with his troops in the igloo listening to a radio program that aired from Islamabad.

One soldier was peeling potatoes for dinner, another was reading a letter from home, possibly for the hundredth time and two were lying in their sleeping bags trying to rest since sleep was usually the last thing on their minds. They had numbed themselves to the memories of their homes and families.

In the program on the radio, listeners would call in and ask for their requests to be played along with a small message. My uncle told me that after a few such calls, the radio host began to read a letter which was probably sent by a soldier’s wife or relative. The letter read that the sender wanted to dedicate a song to a young soldier who had gone to war at Siachen and was sitting somewhere far away from home, unable to call back. The letter said that he/she wanted this song to be dedicated to this soldier whom all his friends and family missed dearly.

The host, without missing a beat added,

“We will play this song for your friend and for all our brothers-in-arms who are away from their families, in unknown location and perhaps, in very difficult conditions only so that we all can be safe, enjoying the warmth of our homes and our families. For that, we are all very grateful to them.”

And with that Amanat Ali’s voice came on air with the song, Aye Watan Pyare Watan.

My uncle recounted that although the reception was weak, the voice quality was poor and with each passing moment, the temperature continued to fall; but the fire that song lit in the hearts and souls of those men blazed and blazed, harder with each passing verse, as they sat cramped in that single, little igloo in a snow-covered wasteland.

No one said a word. The soldier peeling potatoes kept peeling one after the other, the one reading the letter finished it and crept into his sleeping bag, the other one got up and began to get ready as his shift was about to begin, and my uncle kept smoking and listening to the song.

The only thing that changed, were the thoughts of these men.

As the rhythm of the song became steady, so did their heart beats. Their minds cleared and everyone’s thoughts, love, spirits and ambitions became focused on one point, one singular aim, one unified goal. These men had a great responsibility on their shoulders – the responsibility of guarding the land which had given them an identity, a sense of belonging and a respectable life.

They were guarding their country, their homeland.

This incident has left a deep impact on me since the first time I heard it. Even today when I sit in my bunker at night and recall my uncle’s story, I always end up misty-eyed. My love for my country is hereditary and reverberates in my chest with the beating of my heart.

National and patriotic songs had a great influence on the Pakistani nation. My grandfather, a war veteran of the 1965 and 1971 wars, told us that once during his night-guard round of the defences, a new recruit of his company was talking to his friend. He said,

(Noor Jehan’s songs made me join the army but what will I do if I actually have to fight).

There have been many instances in our history that have made me believe that a common man is not very different from a Pakistani soldier. After all, he shares the same worries, the same fears, the same love and the same patriotism for his country.

As the news of the Indian assault on Lahore reached the city, the people of Lahore actually marched to the border to fight for their country, shoulder-to-shoulder with their army. It did not matter that they did not wear a uniform because the passion of a patriot is not measured by his attire. My grandfather once told me that an old man who had volunteered to come and fight at the Wagah border and had said,

(First the bullet will hit my chest, and if I die, then it will reach the soldiers.)

And I can never forget the story that my grandfather told me about a young girl standing and waving to the army convoy going to the Wagah border, with her doll in her hand. My grandfather was part of that convoy. There were people all around busy buying halwa puri – the conventional breakfast of Lahore –but once they spotted the convoy, they started running along the vehicles handing over whatever they had to the soldiers as a token of love.

The little girl ran up to my grandfather’s jeep and offered her only possession – her doll. Arm stretched, the girl called out to the young officer,

This patriotism, this sense of owning soldiers as your own sons, is a wonderful feeling and I can proudly say that I am lucky and honoured to be a soldier and protector of this nation and this country. I truly believe the words,

(Oh my beloved homeland, if I die for you today, I believe that my purpose in life will be achieved.)

For a soldier, this piece of land means much more than I can ever explain in words. For us soldiers, this land is sacred. Its soil is as dear to us as our mother’s embrace. Its winds, whether they blow hot or cold, remind us of our mother’s caresses. Everything about it – its fragrances, its diversity, its terrain – reminds us of our homes and our mothers.

Pakistan is not merely a country for its soldiers. It is our determination to look the enemy in the eye and stand our ground; it is our will to fight until we give our life. It is our courage to face an enemy stronger than us, and that too, with such valour that he dares not set an evil glance on our borders.

This is a country where mothers, wives and sisters happily send off their sons, husbands and brothers to fight for their homeland and pray that they embrace death before dishonour.

This is a country where a mother’s eyes swell with tears of gratitude to the Almighty that her son has died a martyr’s death when her son’s body comes home wrapped in the crescent.

This is a country where a soldier’s death does not lower the spirit of the nation. Instead, it breathes new life into it.

We, the sons of the soil, fight for it until our last breath because this country, this land, this soil is our heritage, our spirit and our pride.

Loves his country, his mother, his soil; for her he bleeds, he sweats, he toils.

The importance we (don't) give our country

We are all blasphemers

No prayers for the soldier...