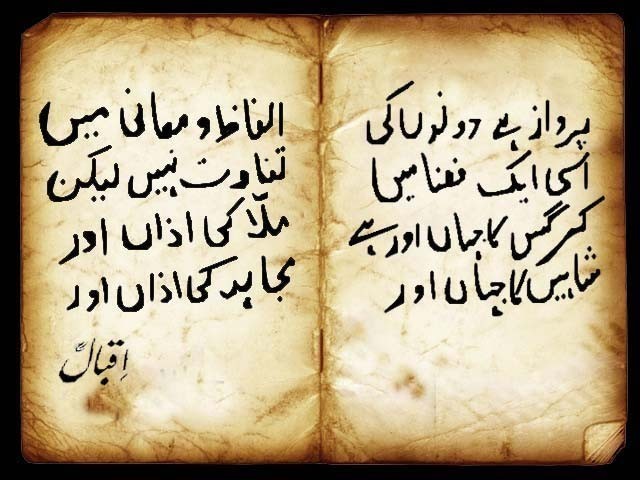 The difference in what we called aasan (easy) and garhi (thick) Urdu was one of the main reasons why I never liked Urdu periods at school. PHOTO: Reuters

There is a large number of modern, educated people in Pakistan that are blind to an entire area of literature, beginning with the first Urdu novel written by Deputy Nazir Ahmed back in the 1800s to anything written in the Urdu newspapers today. Not only are they completely oblivious, but this educated class also looks down upon the mother language and anything associated with it.

To me, it seems that it’s not their fault. For every one of them, somewhere along the line, Urdu lost its value and respect in their eyes.

This is how I experienced it.

I remember very vividly the day I first used the word ‘abay’ in a conversation. It was in first grade, at Habib Public School, and I remember feeling quite proud. I thought I had learnt a cooler way of saying ‘aray’.

Our class teacher was so alarmed that she took it upon herself to drive this evil from us and used up an entire period just to explain how bad the word was, and how we were never to use it again. We were not given a reason apart from ‘it’s bad’. To me it seemed like the teacher was trying to denigrate Urdu.

At the time, if an adult said something was bad, it was bad. Ergo speaking in Urdu was bad.

The difference in what we called aasan (easy) and garhi (thick) Urdu was one of the main reasons why I never liked Urdu periods at school. Our esteemed teachers never told us what situation the poet had been in. Nor did they feel it important to explain why some person with a likeness of ‘Gandalf the grey’ had written a particular piece of very hard to comprehend text.

Maybe my teachers didn’t know or care, or maybe they thought that it was understood. Whatever the case, the end result was me hating Urdu poetry and hating the poets even more.

What I hated most was the hard-to-digest eccentric ‘intellectuals’ from bygone eras who used increasingly complex Urdu, as I liked to call it, as a medium to transfer their message — a message my teachers assured us existed, but never quite connected to the text.

Why could they not have used the simple language of the common man?

Wasn’t the main idea getting the point across? So then why make it difficult?

My fourth grade teacher informed me that these ‘amazing’ poets had used the language of the common man and that the language I was referring to was not Urdu at all. It was, according to her, the ‘adulteration’ of Urdu with a ton of English and slang thrown in. But if that were the case, I thought, why did she not use that complex, arcane Urdu in her own conversations?

Was the ‘real’ Urdu incomprehensible, even for the Urdu teacher herself?

In exams, we were asked to explain the message the poets had tried to convey. According to the teacher’s guide, one that my teacher had on her at all times, I was always wrong to try to decipher the ancient word-masters’ verses on my own. Apparently using simple words to explain something was a sin and an insult to the writer. Translating ‘real’ Urdu to simple Urdu was not allowed.

All subjects besides Islamiat, Sindhi and Urdu were in English. We were supposed to talk in English at school. Chemistry, Physics and Maths could not even be understood in Urdu. Urdu started to seem very backward and unimportant at this point.

Soon enough, unable to cope with the difficult task of getting through my Urdu classes without help, I approached my father for help. By the time I reached fifth or sixth grade, I began to realise, with his help, that the Urdu intellectuals of yesteryear had in fact been in a very different time and place, and had used the language of the common man of that time.

This was a revelation and it succeeded in making me appreciate Urdu poetry somewhat — something that all my teachers had failed in doing. Despite this appreciation, I had become convinced that English was still the language that actually held importance, the language we had to know.

Well, Urdu was just something we spoke.

As time passed and I grew older, the subjects Urdu and Islamiat disappeared altogether. English took over completely and ‘real’ Urdu went out the window. The adulterated version of Urdu was the everyday language. Urdu numbers disappeared from our minds and Urdu has been largely forgotten. The complex Urdu I was taught was definitely all gone.

Who is to blame?

Who is betraying Urdu?

Is it me? My parents? Or the Urdu teachers and the education system?

A student who has done his A-Levels and is interested in sports, writing, reading and learning about new cultures, he tweets as @Taha_Shaheen_ (twitter.com/Taha_Shaheen_)

Applying to NED? These tips may save your life!