‘Catching Fire’ with The Hunger Games! 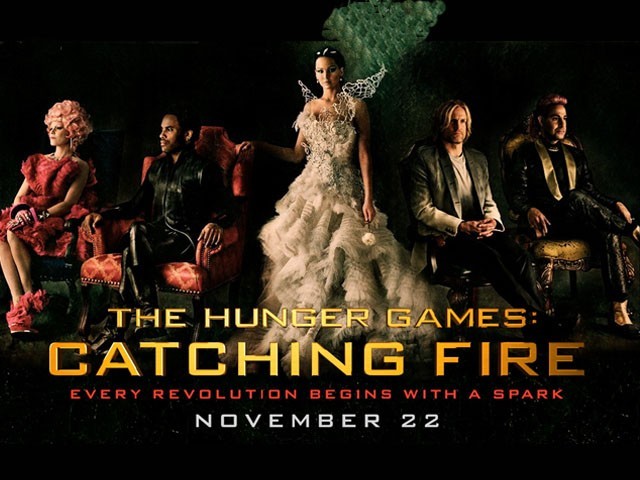 If this film turned out to be more intense than its predecessor, then the other two coming up will definitely be nail-biting. PHOTO: PUBLICITY

With its dark and powerful plot coupled with an abundance of fantastic performances, Francis Lawrences’s Catching Fire is as gripping a watch as its former film. But unlike The Hunger Games, the latest instalment in the franchise based on Suzanne Collins’ popular books, portrays a much darker world and leaves no stone unturned to show the horrors people suffer under totalitarian regimes.

Catching Fire takes us back to the dark, despairing country of Panem. After winning the 74th edition of the Hunger Games, Katniss Everdeen (Jennifer Lawrence) and Peeta Mellark (Josh Hutcherson) return to their home in District 12, the most suppressed sector of Panem. They are on their way to beginning a victory tour of the country when President Coriolanus Snow (Donald Sutherland), Panem’s tyrannical ruler, visits Everdeen with a stark message. He explains that her approach to ending the last Hunger Games, where she and Peeta attempted a suicide pact after learning that only one of them could make it, inspired rebellions in the rest of the districts. He orders Everdeen, who is seen as a symbol of hope by many of Panem’s oppressed citizens, to alleviate the instability.

Everdeen is unable to successfully do so and instead inadvertently convinces President Snow that she is a liability whose presence will lead to further unrest in the country. As a result, President Snow decides that the most effective way to eliminate her is to have former Hunger Games’ winners, including herself and Peeta, participate in the 75th annual Hunger Games.

The movie continues with Everdeen being thrust into the Hunger Games arena once again to participate in yet another fight for her survival.

Everdeen’s character has evolved since the previous film. In the previous Hunger Games, she was shown as a stern but resilient girl who willingly volunteered to participate in the annual tournament in place of her younger sister. She is hell-bent on survival, for she is aware of the fact that her family will not survive for long in her absence. However in Catching Fire, she is emotionally damaged and is traumatised by her experience at the games. She is struggling to come to terms with the deaths she witnessed in the arena, with mental images of the fallen contestants acting as constant reminders of the horrors she was subjected to.

Reprising her role as Everdeen, Jennifer Lawrence delivers a superb performance that is worthy of high praise. She successfully plays an emotionally damaged girl who can still fight for what she believes in when the time calls for it.

Holy Hunger Games!!! #CatchingFire is SO good you guys!!!

Who ever had the idea to put Josh Hutcherson, Liam Hemsworth and Sam Claflin on the same screen is brilliant pic.twitter.com/W1xFCN9uBh

Unlike the previous film, Catching Fire contains noticeably fewer action sequences and is arguably less violent. While a greater emphasis on the Hunger Games tournament, shown for less than half of the film’s duration, would have been appreciated, it must be understood that the film’s primary focus lies on exploring the themes that were only given a brief mention in the previous film.

Catching Fire paints the picture of an Orwellian world that is so desperately struggling to free itself from the shackles of totalitarian rule, one where an unforgiving ruler keeps his people in line by imposing mass censorship and publicly tortures anybody who does not abide by the rules set by the regime. Fear is used as an indicator to control and any sign of hope is stomped on with swiftness.

In many ways, Catching Fire is darker than the first sequel of The Hunger Games, which is quite a statement given that the latter’s primary focus was on a competition that pits children against each other in a battle to the death. This bleak scenario adds complexity to this fascinating plot and makes for a watch that kept me glued throughout the film’s entirety.

Catching Fire’s strong plot and premise, assisted by a stellar performance by Jennifer Lawrence as well as other cast members, make it a thoroughly enjoyable experience that builds on The Hunger Games and even surpasses it on many occasions. So buy your ticket, pick up some snacks and put your cell on vibrate as soon as possible, for you will surely regret missing these two hours and 15 minutes!

Critics hail #CatchingFire as "one of the year's best… blockbusters"! Get tix now & see why: http://t.co/gXRy7ZrjmW pic.twitter.com/fF3sYHDXno

The third and last sequel to The Hunger Games trilogy, Mockingjay will be split into two parts. Part one is said to be released in November 2014 and part two in November 2015.

If this film turned out to be more intense than its predecessor, then the other two coming up will definitely be nail-biting.

Spotflux blocked in Pakistan, what's next?