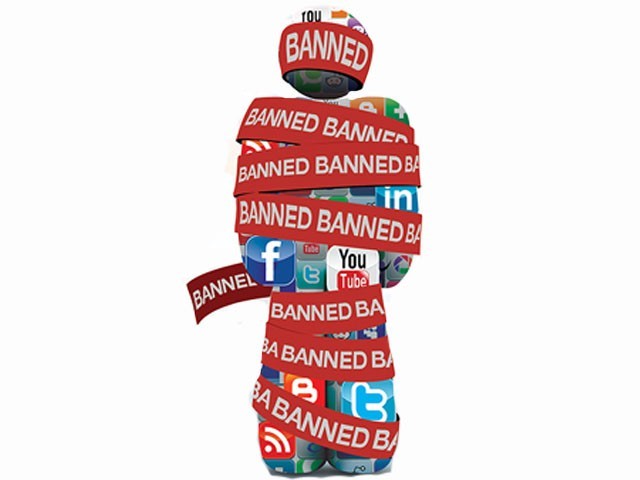 Please do not be casual about signing petitions. Read what you are being asked to sign and support what you really believe in.

As I was about to enter the Blue Dome Mosque in F-10 Markaz, Islamabad, for Jumma prayer, I was stopped by three pious-looking individuals, wearing white turbans and shalwar kameez. They thrust a paper at me and declared that it was my duty as a Muslim to sign the petition.

When I asked them what the petition was about, they verbally explained that it was a request to the Pakistan Telecommunications Authority (PTA) to ban behaya (lewd) content, all across the country. When I questioned them further, they seemed to get irritated and replied,

“Don’t you see? It is all over Pakistan. It exists in ads, on billboards, on dramas and especially on the internet.”

Billboard content in Pakistan is often criticised for being vulgar. Photo: Isa Daudpota

I was still unconvinced and asked them to show me the contents of the petition. I do not remember the exact lines, but I do remember that the wording was vague and it requested for an overarching ban from PTA on lewd content in Pakistan.

As an individual who questions the concept of censorship, I immediately realised that this was something that I did not want to be a part of. And so I refused to sign the petition.

One of the men then raised his voice, I suppose for the benefit of the audience gathering around us and asked me,

“Do you want behayaai in Pakistan?”

I kept my tone as polite as I could and answered that their definition of vulgarity was different from mine. I explained that I was opposed to the very idea of censorship and that technically I disagreed with blanket phrasing everything as behaya because I believed that it was misleading.

Throughout this conversation, there was a nagging question in my head as to what really constitutes obscenity or vulgarity. After all, Pakistan is home to individuals from diverse cultural, religious and ethnic backgrounds and the lens through which we all look at things is obviously different.

I told my ‘friends’ at the mosque that as Muslims it was our duty to guard our modesty but it is not the state’s responsibility to regulate it for us. Personally, I think that it is the responsibility of parents to teach their children a sense of right and wrong, and to continue mentoring them until they reach an age of maturity.

After all, once we reach adulthood, we are custodians of our own morality and each person is answerable to God for their deeds.

I tried to explain to them that such blanket bans gave the government a license to curtail our internet usage and other activities which resulted in more loss than benefit. Moreover, I tried to make them see that banning internet sites, television dramas and other entertainment options can have far-reaching consequences, even resulting in the loss of income for many.

Our debate led to more people questioning the content of the petition and the bearded petitioners now seemed really annoyed. However, instead of presenting a counter agreement, they began to question my imaan (belief) and proceeded to invoke Allah, right there in the midst of people, to guide me to the right path.

Unfortunately, after the entire debate with me trying to convey my opinion to him, I walked away to say my prayers while the bearded man continued to yell at me,

(If you want lewdness in Pakistan, then don’t sign this petition.)

I felt like I had been talking to a wall.

Everyday a committed group of people continues to write to the PTA to ban dramas, newspapers, billboards, cable television, internet sites and social media and, more often than naught, the PTA complies with such requests if there are enough people demanding action.

Petitions similar to what I encountered are designed to harness broad support in order to ban internet sites, social media and the likes. Often these petitions provide a broad mandate to ban different things and can be used for any such objectives that the petitioners may want to pursue. Dates are purposefully ignored on these documents to make them re-usable.

Most of the people, who happen to sign these petitions outside mosques or in markets, are not even informed about what they are signing up for. These petitions are products of ‘chain-campaigns’, which people sign and spread without reading or understanding the content at all. Meanwhile, the PTA continues to be pressurised by one group of campaigners or another, and one after the other different sites go off the internet.

We lost YouTube because of one video that bothered us. I was as appalled by that video as the next person. However, I strongly disagreed with the banning of YouTube because I think of it as a tool, a radio or a telephone. And just like any other tool, it can be used for both, good and bad. At the end of the day, it is up to us to use it responsibly and create positive messages that counter the negativity attacking us.

Moreover, YouTube was a source of income, a source of knowledge and a voice for many. It was a liberty we enjoyed and it provided a forum which unfortunately, we do not have any more.

YouTube was a tool like any other, to be used for the good and bad. Banning it is not the answer. Photo: File

So if such petitions continue to be successful, we will end up losing one liberty after another.

I feel bad because I strongly believe that losing access to these tools results in economic loss for our country. Many of our young people are launching businesses and contributing towards Pakistan’s economy with the help of these tools. In a country plagued by unemployment, we cannot afford to lose anything that helps us improve our economic and living conditions.

And so, I have a humble request to make.

Please do not be casual about signing petitions.

Read what you are being asked to sign and support what you really believe in. Carefully assess the wording of petitions that you come across and please say no when you want to say no.

If ever, you feel that you are being emotionally blackmailed into signing something in the name of religion, be extra careful. Also, be vigilant on the internet – do not just share anything and everything because someone asked you to. It is our duty to educate ourselves and use the power of the internet with vigilance and caution.

Last but not least, always remember that your actions have consequences, not only for yourself but for others as well.

You must act responsibly at all times; the progress of this country relies on you.

A development professional whose work focuses on increasing opportunities for young people in Pakistan through education, leadership development and entrepreneurship. He works for a number of organisations, including Children Global Network Pakistan (CGN-P), Developyst and AIESEC Pakistan. He tweets as @affanjaved (twitter.com/affanjaved)