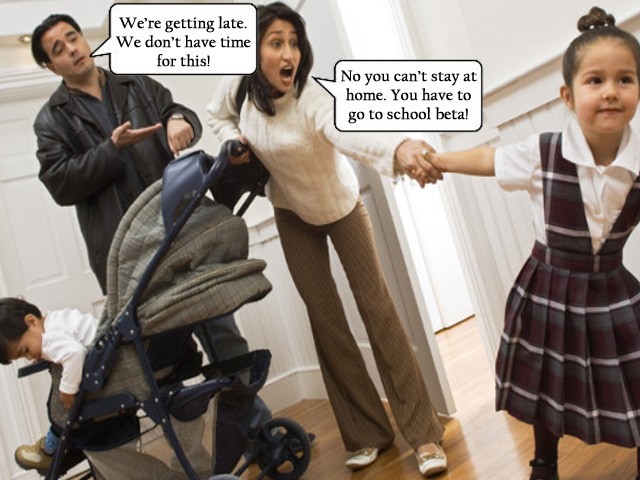 Our children were used to spending time with their grandparents, uncles, aunts and nephews. The same children, deprived of attention, affection and interaction, have become over-demanding.

The desire to hold the rein is one thing, to actually command it is another. At most social gatherings, we often find women complaining about how miserable their lives are and how their in-laws who live with them keep putting hurdles in their way.

They usually sum up their tale of woe by saying,

(You can’t even die at your own will)

What they don’t realise is that the much desired independence from the in-laws leads to a massive increase in responsibilities.

My wife and I were enamoured with the idea of moving out to a house arranged to our liking, where we could cook what we desired. My wife would have the liberty to raise the children as she liked, or shout at the maid for anything and everything, unchallenged. There would be no more adjustments or compromises which one has to accept in an extended family setup.

So, we decided to give it a try and moved out of our parents’ house.

A month later, we are just beginning to come to terms with the shock of living independently.

Where once we used to fling our things assuming someone from the house (usually our parents or siblings) would pick them up, we now  come home to find them exactly where we left them.

Gone are the days when Ammi (mom) would have bathed our two children, fed and changed their diapers, sterilised the feeders and prepared dinner. By the time we used to reach home, Dada (paternal grandfather) and the kids would have had their stint at the park or down in the open corridors of our apartment block.

Our children were used to spending time with Dada, Dadi, Chacha, Chachi and my three nephews, but now they spend their day at a day care facility followed by an hour at my office before reaching home. Bored, hungry and frustrated, both lodge their protests with high pitched cries. The children, deprived of attention, affection and interaction, have become increasingly demanding.

Yes, the house is ours and we can do as we please, but first things first…it’s time to sterilise the bottles, prepare some milk and change the diapers.

I’m relieved when my better half reaches home before me because tired or not she pulls herself to attend to the kids’ needs. In her absence, though, the task falls upon me.

Yes, living independently, one can do as they please, but dinner is not going to cook itself and the realisation hit us hard and fast. And so, my wife quickly takes to fixing our supper. While she cooks, I make myself handy — more importantly occupied — by handling the kids.

Being the youngest of four brothers, I enjoyed certain regency while growing up, but that has unfortunately left me next to useless when it comes to household chores.

The responsibility of being in-charge of the home is taking a visible toll on my spouse. She is not able to reach work on time and her professional commitments drain her so much so that by the time she comes back, she is exhausted like a deflated balloon.

The energetic and upbeat girl I married not long ago is fading under the strain. Conversations and thoughts about growing old, raising our children and providing for them have been replaced with conversations on how to live from day to day.

(Dinner is served and will turn cold!)

Awakened from my slumber by my son’s hollering and my spouse’s call in the background, I make my way to the dining table. Gulping the delicious food she has prepared for us, I feel grateful to Allah for providing me not only a meal but a loving partner to share it with. Despite everything, we are happy.

This is the life of a married couple with kids who decide to move out of their parents’ home for the sake of liberty and independence.

For those who feel burdened living in a joint family system and are considering moving into their own place, all I’m going to say is be prepared because it definitely won’t be easy.

A marketing major who has worked in the fields of marketing research, public relations and advertising. He writes on societal issues and changing mindsets. He tweets as @rehanaliz (twitter.com/rehanaliz)

“How much do you earn? What car do you drive?” – Money has never talked this loud

No Father’s Day for you Papa

Bajee: I only realised her importance after she left...

Egyptian verdict: They gave her 11 years in prison, she gave them a beautiful, victorious smile