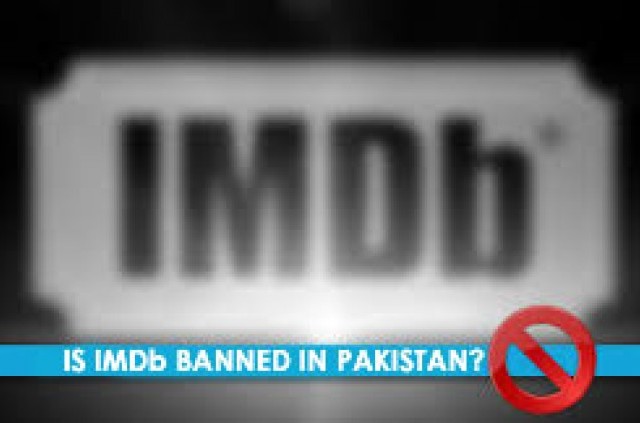 Pakistan has been suffering at the hands of perception and media-related matters being blown out of proportion, falling victim to the same.

First it was Facebook, because of a pastor and his anti-Islamic intentions. When that phased over, it was followed up by the Benghazi attack and the movie that was the cause of a tragic diplomatic mission episode, unwarranted frustrations being vented in the form of riots, stone pelting and much worse across Pakistan and eventually a ban on YouTube that has lasted over 400 days.

While the above two bans had the undercurrent of both inciting religious violence, users across Pakistan were suddenly facing the same error on accessing Internet Movie Database (IMDb) since November 18, 2013, that they would get when trying to access YouTube.

There was no prior announcement made. Users could access the site till Sunday but come Monday, they were hailed with an unpleasant surprise. While social media was where the ban was discovered, users across the country confirm most cannot access the site. Some Internet Service Providers (ISPs) do grant access while most do not.

SERIOUSLY #PAKISTAN, WHY ON EARTH WOULD YOU BAN #IMDB!!! COME ON, SERIOUSLY!!!???!!!! #FirstYoutubeNowIMDB #WTF

Just when the Pakistani movie industry was rising again with #Waar getting 9.2 ratings on ImDb, the Govt of Pakistan decided to ban #IMDB

Govt response to outrage over YouTube still being banned after over a year? Ban IMDB. Were they expecting a slew of films about YouTube ban?

PTA official declined to give specific reason for ban on IMDB – said is placed for 3 reasons: "anti-state", "anti-religion", "anti-social"

The bloody riots in Rawalpindi and across various cities over Ashura and the following days resulted in a curfew being imposed in various cities in the country. Not soon after the riots started was it revealed that hate speech was being incited on social media prior to Ashura by religio-political parties, who are more popular for their intolerant beliefs towards other Islamic sects and religions.

It is assumed that the access to IMDb being curtailed could be related to the YouTube ban and the movie that caused global outcry. Further to the recent riots, the government is now announcing the measures that will be taken against hate speech. Let’s take YouTube as an example. It is evident that Pakistan, a country with some fine information technology academic institutions lacks the ability to devise filters to curtail access to such content. The Pakistan Telecommunication Authority (PTA), and at times ministerial authorities, simply opts for the most extreme measure, a ban.

What is interesting is how this practice of banning stuff, considered not feasible for the masses, is so very similar to one of the world’s most religiously popular countries and also a great ally of Pakistan. Ironic though, how the very same religious countries continue to grant access to IMDb and YouTube to their citizens. Were they against the movie that resulted in the Benghazi attack? Then what brings Pakistan’s authorities to ban YouTube and IMDb, resulting in failure to finding solutions, considering the fact that other religious countries with stricter rules have no such bars?

What propagates and warrants a ban on IMDb, especially if it is unannounced or if an official statement awaits? Is it an error of judgement on PTA’s part? Is it some of the movies listed on IMDb, one being the cause of the YouTube ban?

What most users may not know is the surprising content that is banned on some local ISPs; including certain Wikipedia pages.

One does wonder if the IMDb ban is perhaps the start of many possible unannounced bans to come, while we sit in fear and figure out  what is defined as ‘hate speech’. If social media is where the extremist political parties were warned of the Ashura attacks, could this result in an internet ban altogether for containing content related to exposure and religious expression of all kinds, as perceived by our authorities?

I suppose this is just one more ban added to the list that we do not see eye to eye on.

Gori Tere Pyaar Mein: Will he win her back?