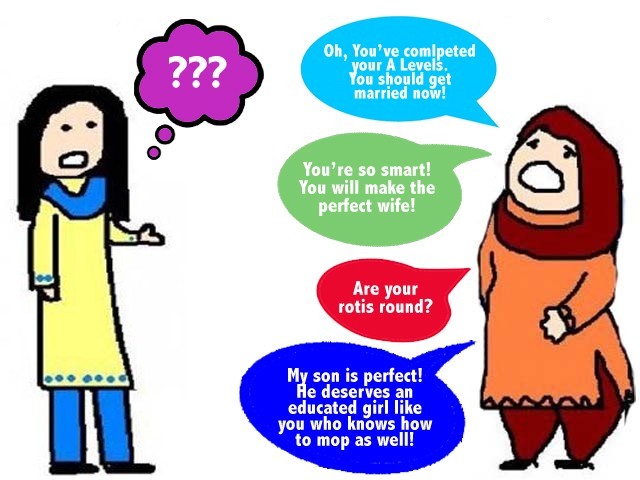 In addition to being tall and fair, the girl must be incredibly proficient in the kitchen.

“You’ve completed your O and A’ Levels. You got amazing grades and A’ Level is a great accomplishment. It’s time you get married now,” said my mother, on several occasions.

“But what about my admission into IBA?”

She would calmly reply,

“Yes, yes. You’ve proved your mettle. Everyone knows you’re smart and clever. That’s why there are so many proposals.”

Yes, that time was here. I was being badgered into getting married.

The sad part about being educated is that you can tell when a person is annoyingly dim-witted. On the one hand, the aunties gushed about my intelligence, which according to my mother was one of the most dominant factors propelling them to propose for me in the first place, while on the other, they also want my intellect to go to complete waste. After all, an ideal wife/daughter-in-law is supposed to be meek and obedient, have no individual voice of her own, be someone who adheres to blind conformism, is sweet to everyone, wouldn’t dare to think of going against the wishes of her in-laws or husband and is just an angel in every form; like a blob of play-dough that can be moulded every which way.

All of this, obviously, after she has finished a couple of semesters at one of the top Ivy League universities in Pakistan. But there is a very thin line here as well. If you do end up fighting your way into acquiring a degree, the aunties are seen promptly noticing the achievement along with one other factor,

(The girl is no longer young)

Of course, the intelligence and educational background in this case has no bearing on their decision.

Due to factors such as these, marriage, to me, became a revolting prospect. The whole idea of in-laws who expect their prospective daughters-in-law to be educated from the best institutions of Pakistan, and yet, demand they give it all up after marriage and act the part of the impeccable housewife just made no sense to me. I fail to understand the logic behind something like this. The fact that female doctors are ‘in demand’ on the list of these rishta-seeking aunties is appalling because they study and work hard to get through med-school, only for their career prospects to be thrown under the bus called marriage? Why go through the hassle in the first place?

Did I want to start living a life like that at 19? Start a married life, or in more appropriate words, start a string of complications? Any sane girl’s answer would be a vehement no. And I’m sane, thank you very much.

The idea that a large part of the Pakistani society supports this is ridiculous. Like I said, being educated does have its downfall – you can spot the fool faster than one who is not educated, and that can lead to disastrous situations. There have been times when I have had to refrain from doubling-up and laughing out loud at how boastful these ladies can be and the ludicrous demands they make as a result. I realise that a mother’s love for her child is blind, but for these women to come and flaunt their sons, as if they have been bestowed upon this very earth as some sort of divine being, while at the same time disregarding the girl completely is nonsensical in the least. It is like these ladies need a platform to confess their love for their sons and they choose to do so at a girl’s house. In my opinion, this is not done to choose a girl; this is done so that ‘eligible candidates’ can apply for the prestigious position of being his wife. It is like a job interview – and I thought that a girl’s father was supposed to do that. Here in Pakistan, however, the mother’s of the boys take up that role.

When the time comes, they set off on mission impossible, choosing, from the shortlisted candidates of course, for girls with the same level of ‘perfection’ as their darling son. In addition to being tall and fair, the girl must be incredibly proficient in the kitchen. She should be able to cook, clean and mop with the efficiency of someone who does it on a daily basis; all with a big smile on her face. She must also dress elegantly and talk in a manner reflective of her education; not that her education is needed for anything beyond that.

The educational achievements are, however, to be bragged about by the saasu ma. She does this whilst being comfortably seated in her drawing room surrounded by her friends, who are being served tea by her oh-so-accomplished bahu-rani.

She takes pride in her doctor bahu who recently completed her MBBS from Dow Medical College (DMC), and is now a literate housewife to her son. Who cares if the said bahu utilised a substantial amount of government funding in the process? Funds roughly amounting to Rs1,000,000, I might add. All this money for a degree that now proudly rests in the bahu’s cupboard, eventually falling victim to time and dust – another casualty.

The madness is so compelling; it still takes me by surprise as to why people don’t realise that there’s a need to step away from the traditions built long ago by women of the pre-partition subcontinent. In those times, our women lived in a confined, restricted world, with no exposure even to the village a few miles away, let alone international cultures across oceans. We need to break the shackles that hold us immobile and stranded in a swamp of absurd values and norms.

What is wrong with letting a woman use her degree in a productive manner?

There are enormous expenditures the government invests in, in order to have students educated at the University of Engineering and Technology (NED), Dow University of Health Sciences (DUHS), Sindh Medical College (SMC), Karachi Medical and Dental College (KMDC), Karachi University (KU) and other government-owned universities.

Why should she not be obliged to return to society what she took from it? Is it really that offensive for a woman to be married and working? And, if the idea really is so unbearable, why in the world do aunties desperately seek out the girls with the most impressive resumes?

We have realised over years and years of this topic being spoken about and written about that the aunties don’t seem to care – then is it not the responsibility of the girl to stand up for herself? Why didn’t you stand up? Why are you taking part in an archaic culture that holds no relevance in this day and age?

It is with a heavy heart that I am forced to admit that rishta aunties are not the only ones to be blamed. It is the fault of our educated young girls too, girls like you and me… and that is the saddest part.