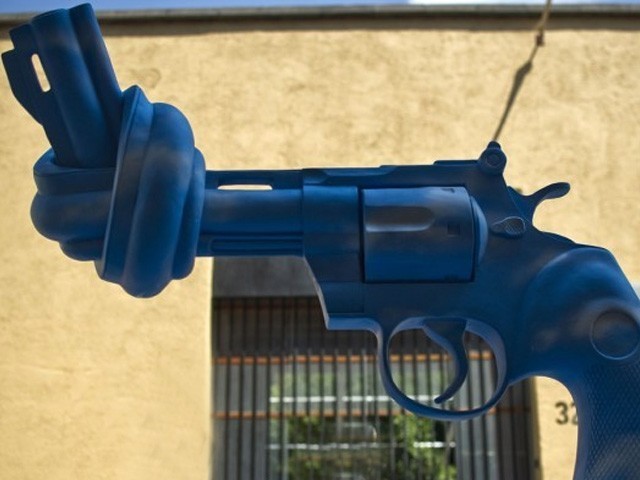 Gun control needs to be implemented in Karachi. PHOTO: AFP

I grew up in a city where guns were unheard of. People moved about freely. Neighbours, family and friends dropped in without informing. Gates were left open and doors unlocked. We were taught never to point a gun at anyone or even threaten anyone. We were repeatedly reminded of guns being a matter of life and death and a grave responsibility.

The only exposure we had to guns was when we went up North during summers. Over there, a man was not a man unless he had a gun hanging on his shoulder as carrying guns signified manhood. Pakistani laws did not influence the Tribal Areas. They had an ancient and unique code which they lived by. If anyone carried a gun, even a 6-year-old, he would be considered to be a fair fight.

The safest was he who wouldn’t pack a gun, for he could not be threatened by anyone. Their code was respected a whole lot more than we respect our laws today. That is perhaps the key to the successful functioning of a society, following a code of conduct, even one that may seem unreal and out-dated.

Speaking of unreal and out-dated, let’s take a look around.

If you think I have mentioned the word ‘gun’ too often, take a look around.

If you think it is the odd, once-in-a-blue-moon ‘terrorist’ who terrorises your city day and night, take a look around.

If you think more guns will keep you safer, for God’s sake, take a look around.

Benjamin Franklin once said, “Anyone who trades liberty for security deserves neither liberty nor security.”

Today, I live in a city where people have signed off on their liberty, their privacy and their sense of decency for a false sense of security. We place unknown and unfamiliar armed men in close proximity to our homes and families and feel the need to have semi-automatic gun(s) to protect our lives or drive around with an entourage of guard vans, with little regard for other motorists. I am afraid we have forgotten the long-learnt lesson that guns are a matter of life and death and a grave responsibility.

Now, there may be some who think their lives are more important, needing serious and professional protection. It doesn’t matter to them how many innocent bystanders will be severely wounded or die when semi-automatic guns are fired indiscriminately, as long as they do not feel the slightest threat heading their way.

Let’s put that in perspective shall we.

When Cain was going to slay Abel, the two sons of Adam and Eve as per the Book of Genesis, Abel refused to retaliate in any way. He was the third man to be born in the history of mankind, and yet, he didn’t consider his own life to be so important, that he would be willing to take his brother’s for his own protection because of his fear of God.

It is time to rethink the sanity of your security. Keeping more and bigger guns does not make you any safer. It is time to think long and hard about the murder of Hamza Ahmed.

Who was it that placed a lethal weapon in the hands of an irresponsible guard?

Did anyone get a psychological report on the man before giving him a gun?

Did Shoaib’s father consider the consequences of handing his teenage son an armed guard to do his bidding?

Can we all sit around, talking self-righteously about Hamza’s death, when most of us are guilty of the same behaviour?

And what can all of us do to prevent this from ever happening again?

Karachi has a gun problem that needs resolving. An effort of this magnitude requires special treatment. It has to begin with the individual, with you. If every one of us did so, we wouldn’t have a gun problem. It’s that simple, as solutions usually are. Of course, this needs to be done country-wide as well, but as the largest and most progressive city of Pakistan, let’s take the initiative.

Such schemes have already been set in motion. From artists to traders to political parties, we seem to have a consensus – no one likes guns and their consequences.

Freelance writer and lifelong learner. A former sub-editor at The News and Dawn. Writing the untold stories of great human beings, because their celebration of life is what inspires and effects change in all of us. Facebook profile: (www.facebook.com/safiyeh.cheval.7)