10 situations which highlight why educating women is vital in Pakistan 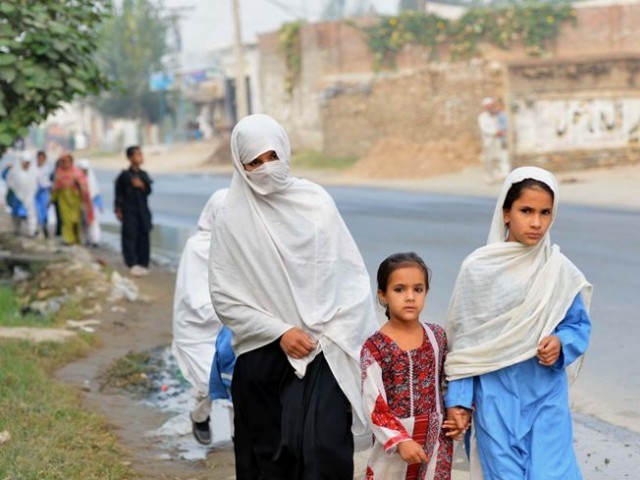 Pakistani schoolgirls walk along a path after school in Mingora, a town in Swat valley. PHOTO: AFP/FILE

Being the daughter of a surgeon, and being a lawyer myself, I hear and read stories everyday about how certain mishaps which have occurred could have been avoided with the simple proviso: education.

The government needs to encourage the right of women to be educated.

Listed below are 10 real-life situations where education would have prevented unfortunate outcomes.

1)  A woman who is encouraged to abort a daughter or is killed or divorced upon producing daughters. If she was educated, the woman would know that the gender of a baby is decided by the male sperm and not by a woman’s eggs. This is basic genetics.

2)  A woman who lets her children play around flying kites, not realising that this can be perilous for them. Common sense dictates to keep children away from such areas to avoid accidents.

3)  A woman who doesn’t take care of her personal hygiene. An educated woman would know that hygiene is an essential component of a child’s upbringing. Washing hands after using the toilet can easily prevent diseases such as cholera and stomach infections.

4)  A woman who thinks the polio virus sterilises her. An educated woman would know very well that polio can be a debilitating disease for her children and measures must be taken to curb it from spreading.  She would understand that the World Health Organisation (WHO) is doing its utmost to eradicate this disease.

5)  A woman who doesn’t know how to read or write and gives medication to her children, which is more than the amount stated. This can often result in severe allergic reactions in children and sometimes even death due to overdosing.

6)  A woman who doesn’t wish to rely on the marvels of modern medicine, fearing it to be some sort of foreign conspiracy and relies on hakims or herbal medicines instead to heal what actually requires medical attention; for example, remedying diabetes with herbal medication, when insulin is urgently required.

7)  A woman whose rights to property are taken away from her by signing legal documents under duress or without the appropriate legal advice, resulting in her losing access to what she rightfully owns.

8)  A woman who doesn’t check her Nikahnama (marriage contract) to see if the section which allows her to seek a Khula (Islamic divorce) has been ticked or not. If this section isn’t ticked then the woman has no legal right to seek a divorce unless her husband divorces her first. This is a right of seminal importance and deprived to many women out of sheer ignorance.

9)  A woman who is told that her marriage can only take place if her family provides a heavy dowry.  She would know that this is a cultural requirement and holds no position in Islam.

10)  A woman who stuffs her genitals with cloth to avoid getting pregnant again, resulting in internal infections. An educated woman would be aware of contraceptive choices available to her and would take active steps to plan her family accordingly.

These are just a few of the medico-legal issues women faced by uneducated women. There is a whole other world of dependency and reliance that women place on men when they don’t have the benefits of education.

The aim here is to raise awareness of how closed minded a woman without education can become.

Some people consider women’s education to be superfluous and pointless but such situations, which continue to occur on a daily basis, provide a distinct and poignant reason why every woman should be educated.

There is a famous quote by Brigham Hill which states

Let’s hope our future generations are in safe hands.