Villains beware! The Justice League of Pakistan is here! 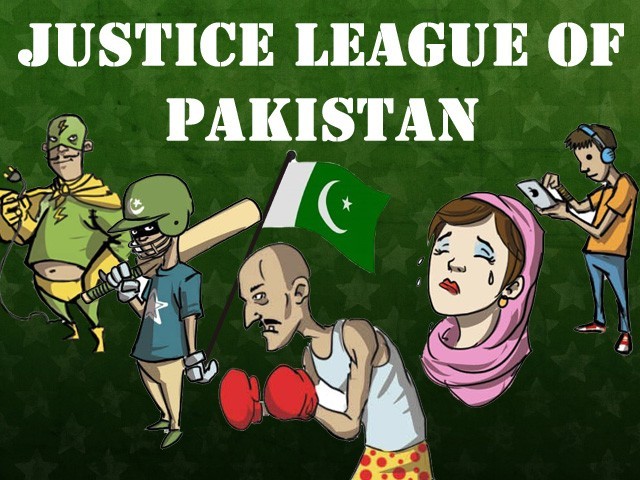 The Justice League of Pakistan will lead us to progress and safety.

I was talking with a friend yesterday, and in our pun-filled banter we came up with an amusing concept: a Pakistani version of the Justice League! Thinking about it makes me laugh, but at the same time I began to wonder, what if they were real? What if there actually was a set of Pakistani superheros? Who would these characters be and what would their superpowers be?

Here is my take on this idea:

Mr Rafique was a kind simple old man with a moustache  stretching all the way across his cheeks. He was disgruntled, of course, due to the nasty loadshedding crisis in his city.

Rafique, or Bijli Man, as he is later known, acquires his powers when he storms into the power company’s headquarters to complain about load-shedding and voltage fluctuation. In the midst of the commotion, he falls into a tank of electric eels being tortured (for reasons best not made public) by those guys who flip the switch on the power supply.

The electric shock from the eels binds with Bijli Man’s pure hate for power companies, blessing him with the power to control electricity! He inevitably goes on a mass rampage, cheered on by pretty much all of Pakistan.

Bijli Man is able to turn into an electric current and move between places via electric wires as and when he pleases. He supplies electric power to every wire he touches and so produces enough current on his own to supply cities with uninterrupted electricity. His experiments with going wireless have left a lot to be desired… as can be imagined. He is loved by one and all.

He stands for justice, peace and has vowed to rid the world of the eternal irritant called ‘load-shedding’.

Ahad is a young hero, hailing from the elite class of society.

He doesn’t actually possess any superpowers but due to his oblivious and mighty rich daddy,  Ahad has equipped himself with the most expensive gadgets the country has to offer. He uses these to help him in his fight against injustice.

He bears a relatively sharp mind and an extraordinary keenness to succeed. This combination was further cultivated when he was sent to the most expensive schools in the country.  His intellect, stubborn resolve and sharp instincts made a lethal combination. He is Pakistan’s very own Batman, just not as suave and hopelessly inept at Urdu.

He loves fast-food and fast cars. Ahad joined the league when his father had had enough of Ahad’s constant temper tantrums about politics and other things that were amiss in the country. His father was fed-up and asked him to leave the house.

“You want to do something about this country, son? Go out onto the streets and do it, don’t complain from the comfort of your couch!”

The time to act was finally here and then the members of the league approached him. They told Ahad that they knew of his unmatched intelligence and offered him place on the justice league of Pakistan. They promised that with all their powers combined, Pakistan would become a safer place. Ahad seized the moment and thus, Burger Kid was born.

He uses his gadgets to track down on criminals around the country, uses his intellect to get lazy authorities involved and makes sure that the ‘aam aadmi’ gets justice (as long as he doesn’t have to spend too much time in ‘poor people’ locales)!

The mysterious, unfathomable and unpredictable member of the Justice League of Pakistan. Underestimate her at your own peril. Fatima is the founding member of the league and is the most powerful of them all.

Some of her superpowers include the ‘tear-up’ — a Pakistani TV drama-based power which allows her to make even the biggest, scariest of enemies crouch down and cry like babies. But if you get our feisty mademoiselle angry, beware of the fatal ‘glare of doom’! You remember the saying ‘if looks could kill, I would be dead’. In this case, take it literally.

The last power, known to be the most powerful of all, is the ‘veil’. She never leaves home without it. It grants her invulnerability, invisibility and invincibility, allowing her to unleash her own personal version of hell on her enemies.

Nobody has ever been able to figure out how she acquired her powers, but legend has it that a broken heart may have changed Fatima into ‘The Girl’.

Yousuf was 10-years-old when his parents died in a drone attack. After this tragedy, his evil, mostly drunk uncle decided to adopt him just so that he could illegally inherit all the property and money Yousuf’s parents had left behind.

The uncle was particularly evil to Yousuf and would get him into trouble whenever possible, even when it was not his fault. His uncle wanted Yousuf to work in a factory but Yousuf loved cricket. Being smarter than your average 10-year-old, he understood that his uncle was trying to get rid of him and so he did what he knew best — cricket.

The cricket field is that one place where Yousuf could be anyone he wanted to be, his place of zen. In times of sadness or happiness, Yousuf would go onto the field and give it his all. Dreaming of becoming the next ‘Boom Boom Afridi’, Yousuf is the best bowler in his town, even compared to kids much older than him.

After suffering untold horrors and finally running away from his uncle’s home, Crickid was born. He was the youngest member of the League. He uses his lethal toe-crushing Yorkers, neck-height bouncers, bamboozling googlies, mean upper-cuts to take down his enemies.

Crickid, with his resilience and unmatched will power has made him one of the most important members of the league. He always comes back, ready and stronger than before.

Rehmat Baba is an army veteran whose wife died 10 years ago in a bomb blast. Since then he dedicated his life to helping others. Mrs Rehmat used to work in an orphanage teaching kids. She loved those kids with all her heart. The Rehmats never had any kids of their own and these kids filled the emptiness in their lives.

When she died, Baba decided to open up an orphanage in her memory and carry on her legacy. For the general public he was Baba, a kind old man who loves to tell stories of his past experiences and travels and always dispensing advice to others. But by night, he would be ‘Chacha’, a superhero with lethal super punches.

His enemies were mafias that would recruit young children to do their bidding. Those who would brainwash kids were hunted down by ‘Chacha’.  As the eldest member of the League, Chacha is a mentor to other members who occasionally come to him for advice on matters beyond their understanding.

It may be wishful thinking, but I hope that such a league truly does exist in the darkest corners of Pakistan.

Are you one of them?

An MBA graduate in Marketing from IBA. Worked in the service industry as a marketing and sales executive for the past 4 years, and is currently working in a Shipping & Logistics Agency in Dammam, Saudi Arabia. Writes/blogs occasionally and worries about Pakistan's political scenario. Tweets as @FaisalARahman (twitter.com/FaisalARahman). Facebook: (www.facebook.com/abdur.r.faisal)