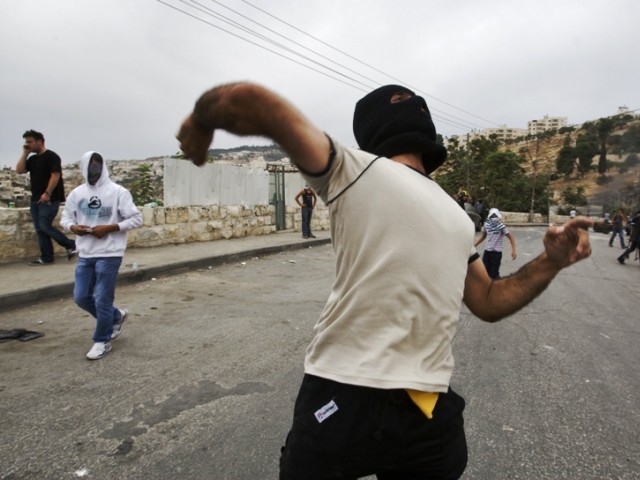 The sheer amount of media reports about these talks has been deafening. The amount of comment has been an absolute deluge to the point where I have been reluctant to write about it (until now), due to the difficulty of contributing something new to the discussion. However, a new piece of information has come to light that I could prove very important to the future of talks and solutions.

These past few days has seen a flurry of reporting, and to-ing and fro-ing, about an article filed by David Makovsky for the Washington Institute of Near-East Affairs:

At its core, the draft letter offers a string of assurances to Israel in return for a two-month moratorium extension. More specifically, US officials indicate that the document makes commitments on issues ranging from current peace and security matters to future weapons deliveries in the event that peace-related security arrangements are reached.

As agencies picked up the article, the White House issued a denial that there was any letter sent. As noted in that Haaretz report, Mahmoud Abbas and Saeb Erekat have repeatedly stated that they will leave talks unless an Israeli moratorium on settlement construction is extended and the White House has been desperate to see such an extension so that talks can continue.

Outlets are now reporting that a deal is in fact on the table, whether or not a physical letter was sent. Politico’s Laura Rozen has a translation of a report in Israeli newspaper Ma’ariv up at her blog. The report is dated several days ago. The money graf, emphasis Rozen’s:

Sources close to the negotiations said that the American package includes a compromise for both parties on the issue of a construction freeze in exchange for a written American commitment to support the parties on other issues that are important to them in later stages of the negotiations. The sources said that in exchange for a compromise on the issue of extending the moratorium, Israel apparently demanded a written American commitment to support its demands on a number of issues, such as recognition of Israel as the Jewish people’s nation-state and security strategies that pertain to defending the eastern border of the Palestinian state. The Palestinians demanded, apparently, American commitments on the issues of borders and Jerusalem, in exchange for their concession regarding the discontinuance of the complete construction moratorium.

Among other inducements, the administration has proposed that there be a lengthy “transitional period” for security on the eastern border of a future Palestinian state, a plan that would presumably include Israeli troops. The United States would also promise military hardware and pledge to veto U.N. resolutions relating to Arab-Israeli peace for a year.

As part of the package, Israel would agree to extend a partial freeze on settlement growth for 60 days.

While both are reporting that Netanyahu has not yet agreed to the offer, to me it seems quite troubling.

The Palestinians have repeatedly said that Israeli troops on Palestinian land would be unacceptable in any peace agreement. Various alternative ideas have been floated, including demilitarisation for a Palestinian state (effectively reducing it to a paper tiger and affecting its legitimacy as a state altogether) and/or international peacekeeping troops, both along the border and in sensitive parts of Jerusalem.

Military hardware is, of course, nothing new, and neither is the veto-ing of UN resolutions. Already the US has been blocking anything critical of Israel in the UN on the tenuous basis that it might “harm peace talks”. A written agreement, however, to block these things for an entire year is a serious smack in the face to international institutions that further entrenches the concept of American exceptionalism as a norm (which also extends to allies like Israel).

What’s most troubling, however, is the promise to officially recognise Israel as ‘the Jewish people’s nation-state.’ The call for recognition of Israel as a Jewish state has come loudest from Israel’s controversial hardline Foreign Minister, Avigdor Lieberman, a West Bank settler and crazy UN speech maker.

Officially recognising Israel as a “Jewish state” is troubling for a number of reasons. Firstly, it affects the key Palestinian request of the right of return, and while, in my opinion, it’s the most unreasonable Palestinian request and the most likely to face the axe, it’s still a key part of their negotiating position.

Furthermore, such recognition by the US would only serve to undermine further the tenuous claims that Israel is a ‘Western-style democracy’ and has ‘similar values’ to the US, a call frequently made in defense of the ‘special relationship’. If separation of church & state is a key element of America’s identity, how can an expressly ethno-religious basis for Israel’s identity be considered similar?

Most worryingly, such recognition will dramatically affect the standing of over a million Arab, non-Jewish, citizens of Israel. There are already numerous Israeli laws that discriminate against Israeli citizens of Arab descent, placing them outside the state by virtue of its internationally recognised identity would serve to only further entrench this discrimination.

And making all these concessions on behalf of the Palestinians just for a 60 day extension on the illegal construction of settlements in occupied land, that probably won’t be adhered to anyway, so that manifestly uneven peace talks can continue seems completely ludicrous. Make no mistake, these concessions should not be treated lightly, but it seems that, in its self-serving drive to score brownie points for “peace in the Middle East,” the Obama administration is doing just that.