I entered Jerusalem as a Pakistani Muslim 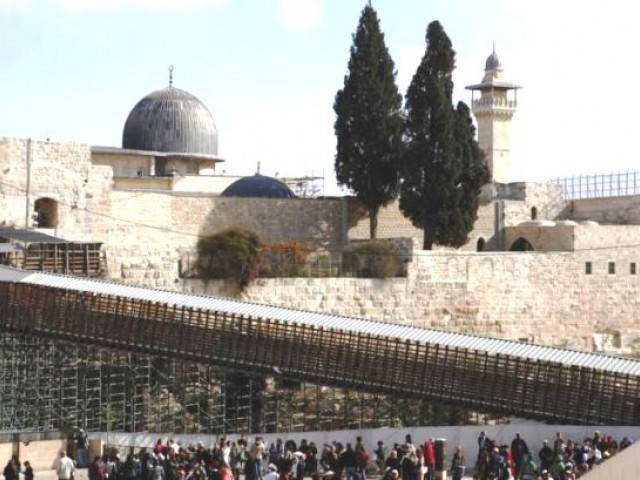 I questioned myself whether I will actually make it; would I be able pray the Friday prayers in Jerusalem? PHOTO: AFP

While I was planning a trip to Jerusalem, I knew that I was taking the risk of losing my money on hotel bookings and transport, as well as the time and effort that went into planning the trip.

I visit Pakistan quite frequently and had been to Lebanon, which Israel is technically still at war with since 1948. I planned to enter Jerusalem via Jordan so that in case Jerusalem did not work out for me, I could fall back on Plan B and start my trip to Jordan earlier than scheduled.

I set out at 7am from Madaba in central Jordan, still doubtful of whether I would actually make it. Would I be able to pray the Friday prayers in Jerusalem, as I wished?

As the taxi drove to the bridge crossing on the West bank, I began to feel butterflies in my stomach. However, looking around I felt calmer since the scenery of the hills of Mount Nebo was beautiful.

When I arrived at the crossing – which Israelis consider to be their border – and reached the first counter, I was asked some main questions:

“What is the nature of your visit?”

“How long will you be staying?”

“Which country were you born in?”

The third question raised red flags and they wanted to see my Pakistani passport along with the British one I was using to enter Israel.

I think that it was probably the first time that they ever saw our ‘green passport’ and a few of the immigration officers even took photos of the front cover with their smart-phones.

My wife and I were then whisked away to the first open door into a standing interview room, after which we were separated. The interviewer then proceeded to ask me more questions than my wife ever had before our marriage!

It was quite obvious that while the officer listened attentively to some of my answers, he was just trying to gauge my reaction to other questions. I would say that 80% of the time, the official was observing my facial expressions rather than listening to what I was saying.

The funniest question was when he asked with a worried expression,

“You have been to Lebanon?”

I just gave a small smile and said,

“Yes, I visited the touristic places there. I love to travel.”

In the meanwhile, my wife was asked the same questions separately. When asked about my work, she mentioned the position that I had held before the current one since I have changed jobs a couple of times. She later told me that the officer’s expression changed upon her answer and after seeing his expression she realised that she had given the wrong answer. She then tried harder to remember and thankfully, got it right.

After we were cleared from the initial immigration checks, we made it to the second desk where our passports were stamped with the visa. We then had to fill out a form confirming that we did not know any Palestinians.

After that, I was interviewed by someone from the interior ministry. This time they made notes of everything that I said, including the phone numbers of my siblings.

Then there was a six-hour wait, during which I spoke to a South African guy whose entry had been rejected twice but he had finally gotten a visa when he visited with his parents. Apparently, single men tend to be rejected more frequently.

By the time we arrived in Jerusalem, we had missed our Jumma (Friday) prayers. We did however see black smoke from the tear gas and other explosives that the Israeli forces had chucked into the Al-Aqsa compound in response to some boys pelting rocks at the Jews, who themselves had forcibly entered to say their prayers close to the mosque.

We were just glad that we had been allowed to enter this sacred place.

Somehow, it felt like I had broken a law by visiting Palestine and the parts which are occupied by Israel since I am a Pakistani citizen and my passport clearly states,

“This passport is valid for all the countries of the world except Israel.”

I have always wondered how Pakistan, being an Islamic republic, could restrict its citizens from visiting Al-Aqsa mosque irrespective of which country governs over Jerusalem.

If all Muslims were to wait before even attempting to visit Jerusalem until it is ‘free’, or until the peace agreement between the Israelis and Palestinians is signed – which is unlikely to be seen in the near future – then we will pretty much hand over the holy mosque on a silver platter to Israel  to do with it as it wishes – turn parts of it into a park or split the mosque into two like the Ibrahimi mosque in Hebron, also known as the Cave of the Patriarchs. If the prayer halls were in full use continuously with visitors from Muslim countries, it is unlikely for this to happen.

The reward of praying at the Al-Aqsa mosque is immense. It is the right of every Muslim to at least make an attempt to visit regardless of the restrictions that our government imposes as these are clearly in conflict with Islamic principles and should be reviewed.

I inquired from the Israeli officers about visiting Jerusalem on a Pakistani passport – they said that I could apply for a visa and if it was granted, I could visit. As our passport says that it is not valid for travel to Israel, they would issue a paper visa and put all the entry-exit stamps on that visa.

If I were you, I would definitely try this option since this is a sacred place for all Muslims and Pakistani Muslims should not be deprived of the experience, only because the government has deemed it wrong for us to visit Israel.