Misbah, your days as captain are over 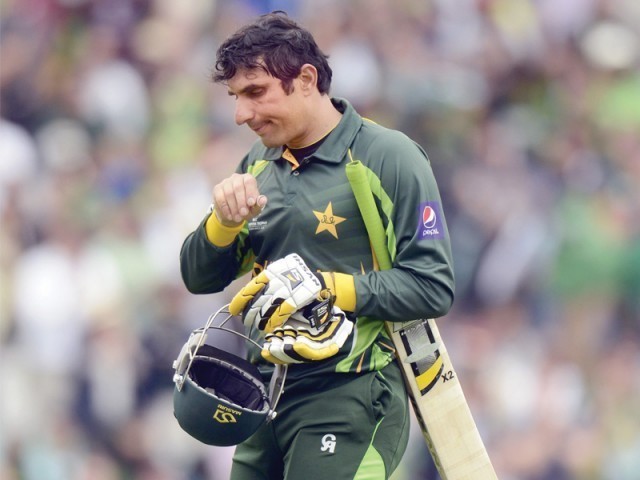 Pakistan will definitely need Misbah in the 2015 World Cup and he wants to play in the mega event. However, it will be so much better if he plays in the team as a senior batsman and lets someone positive lead the team. PHOTO: REUTERS

Before I begin, let me make a couple of things clear just to avoid the usual debate. I am a huge Misbah fan and he is my favourite player. I am not an Afridi or Hafeez lover. However, you just cannot deny the facts or ignore the reality of the cricketing situation for Pakistan under Misbahul Haq.

However, the question still arises whether Misbahul Haq is the best captain for team Pakistan and this question needs some serious answers.

Since the beginning of this year even his worst critics have accepted that he is a requirement of the team and that the team is weak without him. Hence, the criticism and hatred he used to receive from cricket fans has decreased considerably. However, there is no denying the fact that this year has been extremely poor for the Pakistani team with Misbahul Haq as its captain.

Looking at the team’s performance Pakistan has played seven Test matches, winning only two and losing five including one shocking defeat against Zimbabwe. In addition, out of 26 ODI matches played this year Pakistan has won only 11, lost 13 and ended two in a tie.

Although people may argue that cricket is a team game and that the captain is not solely responsible for the team’s performance, one needs to probe more into what has been happening. Only recently, Muhammad Yousuf said that the team’s poor performance is due to the wrong role model they have with Misbahul Haq as captain, and I for the most part, agree with him.

Ever since Misbahul Haq has become captain, the Pakistani batting line up has moulded itself in his style. Misbahul Haq has a strike rate of 71.54 – which if not poor, is not great either – considering the way ODI cricket is played these days.

However, the worst part is its effect on other batsmen.

But wait, this was not the case before Misbah was captain.

Before Misbah took up captaincy, Nasir Jamshed had a career strike rate of 86.19, while Ahmed Shehzad’s was 73.46; Asad Shafiq had a strike rate of 70.0 while Muhammad Hafeez’s was 73.91.

At a time when cricket is becoming faster with every passing day and scores of 350 runs are being chased quite easily, Pakistan is surely not benefiting from Misbah’s influence on the team. Moreover, under Misbah’s captaincy, Pakistan has scored 300+ runs only twice. However, the core issue is the lack of intent our players show while batting in the shorter format.

Unfortunately, that has become a rare event and most of our batsmen waste too many balls without scoring in ODI cricket. Pakistan’s run rate has been 4.68 under Misbah while before him it was around five runs per over.

These were just some of the obvious problems. Now, let us take a look at a few decisions that he has taken as a captain. We do not even need to go too far back; in fact, let us just take a look at the last series against South Africa.

Misbahul Haq chose Wahab Riaz and even Sohail Tanvir over Junaid Khan for the first three matches. Any sensible person, with even a wee bit of knowledge about cricket, would be able to tell that Junaid Khan is a much better player than both of them. After all, he was the most threatening fast bowler for Pakistan this year picking up 35 wickets in 21 matches with an economy rate of 4.84.

On the other hand, Wahab Riaz has taken a mere eight wickets in his last 14 ODI matches with an economy rate of 5.72.

How Misbah could prefer someone with such a poor performance is beyond my understanding.

Moreover, Sohail Tanvir had played no ODI cricket this year but he too was preferred over Junaid Khan!

Even when Junaid Khan was allowed on the field, he was brought in to bowl in the 26th over of the match. It was unbelievable to see that a fast bowler, who strikes regularly for Pakistan, came on the pitch after half the innings were over. By the end of the series, Junaid Khan proved his mettle by taking more wickets than both of these bowlers even when he appeared in only two ODI matches.

The icing on the cake was when Misbahul Haq said at the end of the series that he preferred Wahab Riaz over Junaid Khan because the former can bat better than Junaid Khan.

Why would he play a bowler because he bats well, is my question?

Misbahul Haq has always said that Pakistan needs an all-rounder in the team. I agree with him, we do need one. However, isn’t it strange that Wahab Riaz bowled just 14 overs in the series and was preferred because he batted well, while Abdul Razzaq and Hammad Azam were not selected for the series, despite having the ability to bat better than these two and can bowl four to five overs a match easily.

Most importantly, a captain is responsible for improving the confidence of the players, especially new players. However, Misbah has actually shattered the team’s confidence. Take for instance, Asad Shafiq, who scored a century in the very last innings of the last Test match but was dropped in the first couple of ODI matches. On the other hand, South Africa included Imran Tahir simply since he was in form during the Test series.

The list of players, who were included in the team but never played a single match and were dropped, is a pretty long one under Misbahul Haq’s captaincy.

If you are still not convinced that Misbah is not the best captain for our team, here are two more examples worth looking into;

During the third ODI Pakistan got off to a thundering start and was almost in control with 79 for two in 15 overs. Scoring 13 runs in the previous over, Misbah was gaining momentum, playing freely and was not out on 14 balls. However, for no reason he played down two maiden overs and by the time he got out in the 21st over, he ended up on 19 off 34 balls with Pakistan at 87/4.  He made only six runs off the next 20 balls.

The question is how could he waste so many balls for no reason and build pressure on other batsmen, when his job as a senior is actually to lessen the pressure?

All he had to do was to rotate the strike. Yes, he is the highest run-getter, yes he always ends up as the top scorer in the match, but is he really playing for the team or himself? I do not doubt his sincerity but it does look like the team is suffering.

Then, in the next match of the series, Pakistan needed 41 off 30 balls with six wickets in hands and Misbah still batting on 60 odd. However, Pakistan failed to win the match, not because the opposition bowled well, but because Pakistan had forgotten how to stay positive.

Also, since Misbah has taken over the captaincy, our team does not score on 60% of the balls they face in an inning, which makes 180 balls out of a possible 300.

You must have guessed by now that I can go on and on with such examples.

There is no doubt that Misbahul Haq is the backbone of Pakistan’s batting and our cricket team will be poorer without him. Having said that, it is about time Misbahul Haq steps down from the captaincy in the ODI format at least and Pakistan brings in an attacking captain – be it Shahid Afridi, Younis Khan or even Muhammad Hafeez.

It is high time that Misbahul Haq steps down from the captaincy in the ODI format at least, and Pakistan brings in an attacking captain like Muhammad Hafeez. Photo: File

Even if Pakistan loses after showing positive intent, it feels good, but it really kills the spirit of Pakistani fans when the team enters that slow mode, scores 20-30 runs in the first 10 overs for a loss of two or three wickets; it is obvious that they will end up losing the match the dull, boring way.

Pakistan will definitely need Misbah in the 2015 World Cup and as he has recently said, he wants to play in the mega event. However, it will be so much better if he plays in the team as a senior batsman and lets someone positive lead the team.

There is no doubt that Misbahul Haq has done a lot for Pakistani cricket. After all, he built a team after the spot fixing fiasco and gave us some memorable wins against England and in the Asia Cup. However, in my honest opinion, he should have stepped down after the tour of South Africa in February, 2013 to give enough time to the new captain to become accustomed to the team.

Pakistan was able to edge out Bangladesh in a tense final and clinch their second Asia Cup title. Photo: AFP

Having said that, it is never too late and change is always good.