Six reasons why Misbahul Haq should not be blamed 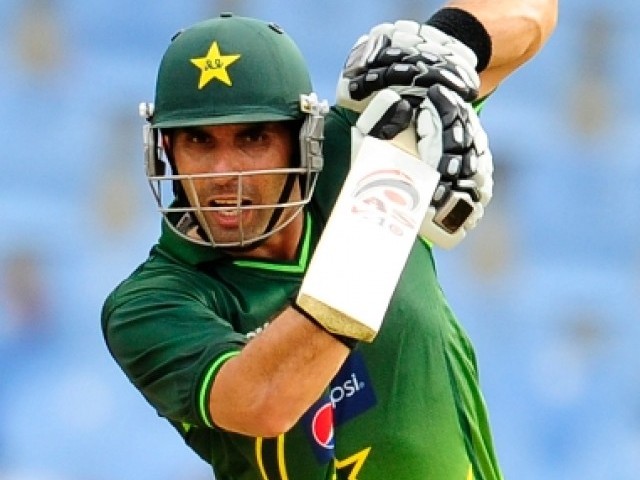 If anyone has seen Misbah at the crease, they know that he is patient, disciplined and tries to play a long innings. PHOTO: AFP

I wouldn’t fault Pakistan’s ODI and Test match captain, Misbahul Haq, if he is just a teeny-weeny bit happy that Pakistan lost both T20s to South Africa. If I was in his place, I’d be somewhat pleased as well.

“Blame it on me now!” I’d say while grinning from ear to ear.

Recently, it seems that the maligned Misbah has become the Malala of Pakistan cricket; everything is his fault. When he plays defensive cricket because he knows that the rest of his team can barely qualify when under pressure, he is accused of pedestrian batting. But if he throws down the gauntlet, he is accused of being irresponsible. He is damned if he does, and damned if he doesn’t.

In the first ODI against South Africa, where Pakistan lost by one run, Misbah was the second highest run scorer; batting at a decent strike rate considering the circumstances. Ultimately, the team’s incapable clowns failed because they were lost without him. Was he expected to come out and hold their bats for them?

Leading such an incompetent team, it is no wonder Misbah plays with extreme caution.

Interestingly enough, it hasn’t been the Pakistani fans gunning for Misbah, but rather, our cricket ‘experts’, who are laying the entire blame on the gutsy middle order player.

Perhaps, like the rest of us, former cricketers such as Mohammad Yousuf and Shoaib Akhtar are frustrated by the team’s performance, or perhaps are envious that at the age of nearly 40, Misbah is fitter than they were at the age of 30.

But surely, few are more irritated than Misbah with Pakistan’s performances. After Pakistan started slipping incredibly from what seemed like an unassailable position in the first ODI, the normally calm Misbah could be seen in the dressing room, pacing behind the coach like a caged panther, shaking his head and shouting out in vexation.

From what I recall of a survey shown on CNBC TV, over 60% of Pakistani fans said they did not blame Misbah for the team’s terrible ODI performance. On the other hand, around 20% blamed the Pakistan captain, while the rest, who clearly had more important things on their minds, actually said they didn’t care either way.

Even opposing fast bowler Dale Steyn was surprised that Misbah wasn’t in the T20 squad. In a post-match interview, he laughed with disbelief,

“I didn’t realise [that] Misbah wasn’t playing until they [Pakistan] were about six down. And I thought, where is he?”

The comments against Misbah are now making it clear that our delusional cricket experts, similarly to experts in other fields of the nation, are looking for an easy scapegoat rather than try and find a viable solution to a complex issue.

Here are six false assumptions about Misbah and the boys in green:

Assumption 1:  We have a team of lions

‘A senior member of the Pakistan cricket board recently said one should not expect the team to win when a pack of lions was led by a “jackal”.’

I don’t know which psychedelic flavor was added to this PCB member’s shisha, but the Pakistani cricket team is certainly not packing lions. In fact, the only feline that recently graced the cricket field during a Pakistan match was that bad luck black billie during the fourth ODI.

Our opening batsman is Mohammad Hafeez, who going by his scores is more of a duck than a lion. The other openers such as Nasir Jamshed and Ahmed Shehzad are promising, but still far from consistent.

Sohaib Maqsood could be our next big thing, but needs grooming and apparently has a history of fitness issues. Meanwhile, our last next big thing, Umar Akmal, although supremely talented, bats like he had been dropped as a baby by his nurse. This could have been the same hospital where Shahid Afridi was born, considering that ‘Boom Boom’ continues to act like that actress who was hot 20 years ago, but now needs to zip her dress up and start acting her age.

In our bowling department, the only lion we boast is an old one; Saeed Ajmal is unfortunately in his mid-30s and nearing retirement.

So, regrettably, we are less a team of lions, and more like a misfit zoo with old animals who used to draw a crowd and young animals who are still chasing their tails.

Assumption 2:  the rest of the team tries to bat like Misbah

Recently, Mohammad Yousuf told a few jokes when criticising Misbah. The first was that our batsmen are following Misbah as a role-model, which is why they are unable to score runs and thus win matches.

If anyone has seen Misbah at the crease, they know that he is patient, disciplined and tries to play a long innings. Clearly, this is the exact problem with Umar Akmal, Shahid Afridi, Nasir Jamshed, Mohammad Hafeez and rest of the batsmen.

Obviously, they are trying too hard to emulate Misbah by occupying the crease.

Why, just the other day I was screaming at Shahid Afridi and Umar Akmal for playing patiently like Misbah, rather than trying to irresponsibly hit the ball out of the park.

Assumption 3: Misbah should bat at number three and lead from the front

This is another joke courtesy of Mohammad Yousuf, who says that our batsmen’s technique is poor is because Misbah doesn’t have the guts to come at the number three batting position.

First of all, let’s think of all the times that Mohammad Yousuf as Pakistan captain came in at one down. Under his captaincy, Pakistan’s batting also struggled, and although the fans begged MoYo to come in at number three, he stuck to his favorite position in the middle order. So please, as great a batsman as you were Mr Yousuf, practice what you preach.

Secondly, Misbah coming in at one down is only a stop gap solution and won’t improve any cricketer’s technique. Our batsmen have always had deep technical flaws that come from our terrible grassroots standards. How can one blame Misbah for that?

Watching prolific domestic cricket scorer, Umar Amin, play against international bowlers, one can easily notice flaws in his technique where he is trapped on the crease playing across the line. According to MoYo, Misbah is to blame for Amin’s terrible technique and not our flawed domestic circuit.

I would say that Yousuf and Inzamam adversely affected Pakistan cricket by introducing a needless religious focus in the dressing room. This made many of our cricketers uncomfortable, as evident from statements that leaked out in the media. Now, Yousuf is lobbying for Inzamam to become Pakistan’s new coach.

While Inzamam was a great batsman, his technique wasn’t fabulous in testing conditions. One has to look at Inzamam’s World Cup record, where aside from 1992, he was a huge disappointment. Furthermore, Inzamam’s record in Australia and South Africa, where the conditions really test a batsmen’s technique, was quite ordinary. In Australia he averaged a mediocre 30, while in South Africa, he scored at an average of 31 runs per Test match innings.

Assumption 5: Saeed Ajmal would be a better captain than Misbah

Like a blind man praying to find something in the darkness, both Yousuf and Akhtar are insisting that Ajmal would be a better captain than Misbah. That’s like selling your car and buying a similar used model as a replacement.

You can see how the desperate minds of Yousuf and Akhtar are working. Currently, we don’t have a single reasonable standby for Misbah, because frankly, not one cricketer is an automatic pick in the team, aside from Ajmal. But is that a valid enough reason to pick the off-spinner as the new captain?

Ajmal has already stated that he wishes to retire after the World Cup, so appointing him as captain doesn’t seem like sensible thinking. Also, the complaints Yousuf and Akhtar have about Misbah involve his batting.

On the field, Misbah is a decent captain. His field settings are on the mark and he attacks new batsmen by blocking singles and employing close in fielders. He is certainly a better captain than Yousuf ever was. One can recall the Sydney Test, where Yousuf suddenly set defensive fields, even though the Australian tail-enders were exposed. The Australian late order took advantage of Yousuf’s perplexing tactics, moving from a shaky 257-8 to a score of 381! It was some of the worst captaincy in the history of Pakistan cricket.

If the complaints about Misbah’s captaincy are about his approach to batting, why replace him with a bowler and at what cost?

Will Ajmal continue to bowl as well under the pressure of captaincy?

Will this appointment create rifts in the dressing room?

Keep in mind, Misbah was the one who brought Ajmal into the team, so it would surely create friction in the dressing room.

Assumption 6: Misbah only makes runs for himself, and not the team

This is a theory that comes less from experts and more from some members of our public.

Cricket is a team game and one cricketer can’t win a match alone. I remember when Sachin Tendulkar was India’s only good batsmen; he would score countless runs, but often end up on the losing side. Was this Sachin’s fault, or the fault of the rest of his team?

Blaming Misbah for not being on the winning side would be like having an 11 propeller boat and being angry at the only propeller that is working.

Is the strike rate quite slow?

Yes, but keep in mind that Misbah almost always comes to bat in a crisis, where he is forced to drop anchor. Does the Misbah propeller spin slowly because it is designed that way or because it has to carry the work load of 10 other propellers?

Let’s look at one of the few matches where Misbah did not come in under pressure. During the first Test match against South Africa, Misbah came in after a fantastic opening stand and scored an excellent century that was fairly aggressive by his standards.

No, Misbah is certainly not perfect, but it is obvious that he is doing the best he can with the cards he was dealt.