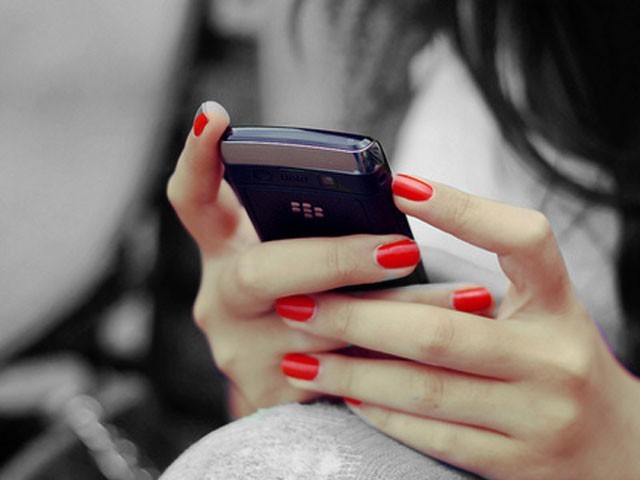 She just didn’t feel like listening to what her family members had to say.

While sitting on the breakfast table with her family, Warda constantly kept updating her Facebook news feed on her cell phone. With each bite, she scrolled down the screen. She cherished this little virtual corner of hers, away from her family members who sat right across the table, observing her drift into cyber oblivion.

Some of the posts made her smile, others transported her into deep thoughts. Throughout this period, she paid no attention to what was going on around her or what her parents were talking about.

This had become a routine for her.

She just didn’t feel like listening to what her family had to say. She already had so much going on in her virtual life that taking out time for their real life issues seemed uninteresting and, frankly, a waste of time. She could use the same time to update multiple statuses and follow her favourite band; a more constructive use of her time.

Once done with breakfast, she stepped out of the house and was on her way. As always, she forgot to say bye to her family. They had accepted the fact that their daughter was now a Facebook junkie, but they had no idea how to rehabilitate her addiction.

She was driving to university when her mobile phone beeped. It was a notification alert. She wanted to see what it was about, so she started rummaging through her handbag for it and finally found it. She would just take a quick glance. In the few seconds of her attention being diverted to her phone, she did not notice the huge truck coming her way.

The horns of the truck started blaring angrily. Yet, Warda, so deeply engrossed in her reading the notification, completely tuned out the desperate attempts of the horn indicating trouble. Before she could look back up, the truck rammed straight into her car, a loud explosion erupted from the collision and then there was complete darkness. The last thing she remembered seeing was the tiny red signal on a blue backdrop tab on her cell phone.

What seemed like only seconds later she jolted into consciousness. There were strange people all around her. Squinting through blood-crusted eye lashes she tried to see if she recognised someone. She couldn’t recognise anybody. She tried instead to listen out for familiar voices, but the people around her were talking in jargons. Someone yelled out but the voice faded and she drooped back into unconsciousness, all she heard was ‘something blood…’.

The loud voice of some man jerked her back to reality barking about some heart that needed to be stabilised while someone else turned a machine on right beside her head. The high pitch sound like a beeper gone flat filtered through her brain. ‘Someone turn that thing off’, she thought annoyed. During all the commotion around her she realised that she had never responded to her friend.

‘Where is my phone?’ she thought, dazed. ‘I have to respond to my friend.’

A second later, she felt an enormous ache burst through in her body and the sheer pain caused her to faint. A few minutes later, she opened her eyes to see what was going on around her, but the light above her head was too strong.

She started understanding where she was.

And then the pain subsided…

Images of her sitting with her family, watching a movie, flashed by her eyes. Her father was giving her driving tips, while she played Ludo with her siblings. She saw herself arguing with her brother, eating ice cream, pouring her heart out to her mother, going for outings and having tons of fun. The feel of rain on her skin and the brightening up her life again…

This time when she opened her eyes she saw her family. They had their back towards her and were gathered around someone else’s bed. She was so relieved to see them. She hadn’t realised how much she missed them until just now. All she wanted to do was throw her arms around them and feel the security of her family wrap itself around her.

But her mother didn’t seem happy at all. She was sobbing uncontrollably and her father seemed to have gone numb.

She moved towards them to nudge them and let them know that everything was going to be okay. But they didn’t budge. They stood there, ignoring her presence completely, crying.

‘Why are they crying?’ she thought, ‘I am right here!’

‘GUYS! I AM RIGHT HERE!’ she yelled out, but they didn’t seem to hear her.

She started to panic and decided to call out to her mother instead.

She was no longer a part of their world anymore. She was in another world altogether, all alone.

“Why aren’t you listening to me Ma? Why are you ignoring me? I understand that it was my mistake. I shouldn’t have stopped spending time with you. Please forgive me! Just give me another chance so that I can set things right! I understand now that nothing can substitute the love and support of a family.”

But it was a vain attempt.

A strong illumination descended upon her and she was told by a strong voice that her time in this world had now ended.

She cried and pleaded for more time.

Just another minute, a few seconds only; she wanted to tell her family that she loved them with all her heart. She wanted to let them know that she was sorry and that she missed them already.

But it was too late now.

If we observe our lives today, we have become busier with our virtual lives than those we live in reality. We have forgotten that life is not just about social networking – there is more to it.

Though you have thousands of virtual friends on Facebook, when your time of need arrives, only your beloved ones turn up. So why do you prioritise these virtual relations over your real ones?

As a teenager, I feel that we are being trapped in a cage of social networks, with fewer of us communicating with each other face-to-face. With each passing day, the bars around the cage are steadily closing in with every new social media forum online.

For many of us, it is impossible to visualise life without social networking. We should keep in mind that there were people who lived without this technology before us and they managed to have friends, live an amazing life and live through their experiences in reality.

We need to live, not just exist.

We need to make sure that when our time comes to an end, we do not regret the way we have spent it so far.

We must understand that we have very limited time with our beloved ones.

Today, have dinner with your family, meet your friends, show gratitude and love your life.

And the next time you log onto Facebook, make sure it is after you have spent time with your family.

A medical student at Sindh Medical College. She is creative, confident and practical and believes that words have power.