I am a Sunni and I married a Shia 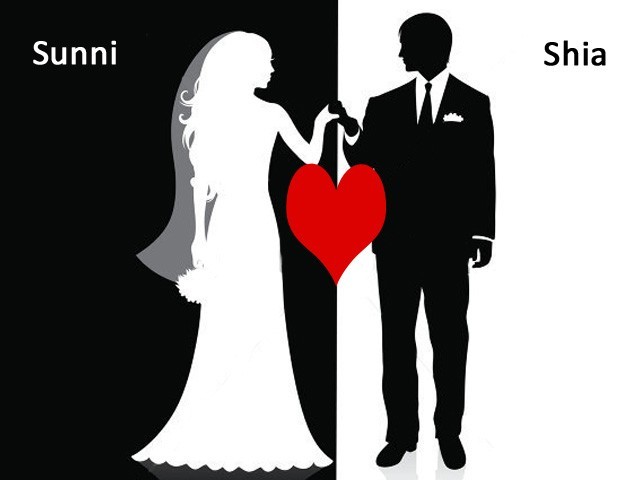 It would be safe to say that I never really believed in love, despite having read a million romance novels, watching the necessary romantic comedies and having the requisite number of crushes during my teen years.

I guess you could blame my convent education, my formative years being in the influence of feminists. I prescribed to the theory,

‘A woman needs a man like a fish needs a bicycle’.

I was a love-cynic at best and mighty proud of it.

I could never understand how some girls could fawn over the opposite sex, fall helplessly head-over-heels and tie the knot at times to Mr Not-So-Right. It was baffling to me when a cousin of mine eloped, loving someone to the point of rebellion and particularly, hurting and humiliating those who loved and raised you all your life.

I just could not wrap my head around it.

And then, unfortunately, just like it happens in low-budget movies, cupid struck when and where its least expected. After having spent my early twenties meeting many ‘unsuitable’ boys, Mr Right decided to swoop in on my 28th birthday. There was just one tiny catch – I belonged to the mainstream Sunni sect and he was Shia.

I was extremely apprehensive initially and somehow, more than my own feelings, I was more concerned, or should I say curious about how my family would react. Relatives in my extended family had married outside the religion, but no one had ventured into the Shia zone before. After the initial few months came the realisation that we were meant to be. I was falling into that spiral and very soon there would be no going back. But I was in it for the long haul and that epiphany came soon enough.

I have to admit that gathering the courage to broach the subject before my parents was the most difficult task. The actual discussion went smoother than anticipated. In my paranoia, I thought all hell would break lose as my folks are semi-conservative. But thankfully, both of our parents were quite happy with the arrangement.

Our respective parents’ reaction left us dumbfounded. Turns out we were both quite prejudiced about our parents’ mind set.

These are parents who we often scoffed at for being ‘old-fashioned’, dismayed by their yearning for the past simpler days and irked at their technological impairments. Their reaction proved us wrong and we vowed not to hold preconceived notions again.

So we tied the knot, with a short and sweet Sunni and Shia mixed nikkah and sailed off into the sunset.

We were, however, surprised to find that there were objections that came from other domains. There were people who looked at me with a ‘you kafir’ look in their eyes. One day over dinner, my husband’s childhood friend literally bombarded me with a shocking question,

“What will you do if your children turn Shia? How would you feel?”

I was dumbfounded at the absurdity of her question.

To this day, I fail to understand why my children’s chosen sect affected her at such a deep level. It should be quite amusing for the readers to note that she later married outside her religion. Well, to answer the question, my husband and I have reconciled to the fact that our children will grow up Sushis (Sunni-Shias). What is more important to both of us is that they turn out as good human beings, which comes before being good Muslims, which in turn precedes the sect they choose.

I cannot say I had no reservations initially, but I got acclimatised slowly and gradually. Most of my issues were quelled over these last two years. Hardly any marriage comes free of emergent concerns and issues, and it would be immature to think that it would be smooth-sailing.

To an outsider looking in, the very idea of Muharram may seem quite ominous. Visions of women dressed in black from head to toe, the expression of gloom, the mourning and commemorating extreme tragedy in intricate detail. For some, it may take a while to sink in actually.

We should understand that this is an exercise in stereotyping. It’s important to remember that when we get busy putting people in boxes, we should know how it would feel if we were to be at the receiving end of it. Trust me, being stereotyped is no fun. Coming from a mainstream sect to a much smaller one, I have seen this picture up close.

In my particular case, I am not expected to go majlis’ as my in-laws are very open-minded and not the least bit conservative despite being practising Shias. I voluntarily attend whichever majlis I choose to. My husband, on the other hand, makes his decision based on who serves the best haleem.

I too made mistakes, lots of them, all of which were overlooked. Once I completely forgot it was Muharram and wore a magenta kurta to work. Learning the correct jargon took its own time. It’s not a ‘flag’, it’s an ’alam’, one doesn’t get a ‘lunchbox’ after the majlis, it’s referred to as ‘tabarruk’. After many faux pas and the horrible taste of my foot in my mouth, there’s much improvement, but I still have my moments.

During Muharram, of course I avoid wearing bright colours, which was the case even before I got married and I simply attend the congregation without carrying out any of the rites. I should admit, my first Muharram at my in-laws I found everything quite strange. I was in the thick of it and yet not ‘one of them’. At times I did feel I stuck out like a sore thumb. Over time I realised that that is exactly how the Shias feel all the time outside the Imambargah, marginalised.

Sadly, we as a nation tend to single out our minorities and are not very tolerant of someone ‘different’, the prejudice being based on ethnicity, religion, sect or anything that differentiates. In a country where 30% of the population marry their first cousins, we have a very inward-moving tendency.

It is most certainly worrisome that Imambargahs need very strict security due to the growing intolerance and acts of terrorism in its extreme form. The targeted murders of Shias have lessened in number since the 90s, but the hate has certainly not subdued over time. Come Muharram, I cannot help but worry that my husband and in-laws, whom I have grown to love, are in more danger than I am on a day-to-day level.

We have become so desensitised with the information overload that countless channels have bestowed upon us. It’s a troubling fact, that I really understood the true meaning of the word ‘threat’ after I got married. Unfortunately, nothing makes us understand the severity of a situation unless we, ourselves are at the receiving end. As a nation we truly lack empathy. There are numerous Shia friends and acquaintances who have received death threats.

I sincerely wish that the perpetrators of sectarian violence get to experience the vulnerability and helplessness that a minority feels in this country. Where every individual suddenly becomes an authority and issues their own fatwas based on their personal likes and dislikes.

I hope it’s not too late before we realise that religion is a personal issue, between the individual and his Creator.

My having married into a Shia family has not made me any less of a Sunni than I was before simply because I was sure of what I was and still am. My husband and I do debate about religion and what differentiates us, but we do it respectfully, giving rightful accord to each other’s views. We exercise ‘let’s agree to disagree’ very courteously and these discussions leave us with food for thought and are, if anything, quite intellectually stimulating.

Having said that, we also do collectively marvel at the craziness of certain Muharram rituals, especially the designer lawn, linen and cambric collections in solely black and white that are strategically launched a few weeks before Muharram. Or how there’s an hour-long debate about who attends the most majlis’ in a day, who serves the best haleem and how such-and-such was wearing a bright shade of lipstick in Muharram.

All in all, my experience is interesting to say the least. I have many Shia friends married into my sect and I am certain they have their own tales to tell.

Works at a local pharmaceutical company in Pakistan and dabbles in public relations consultancy.