Mr Bilal Lakhani, Pakistan is not a dying nation 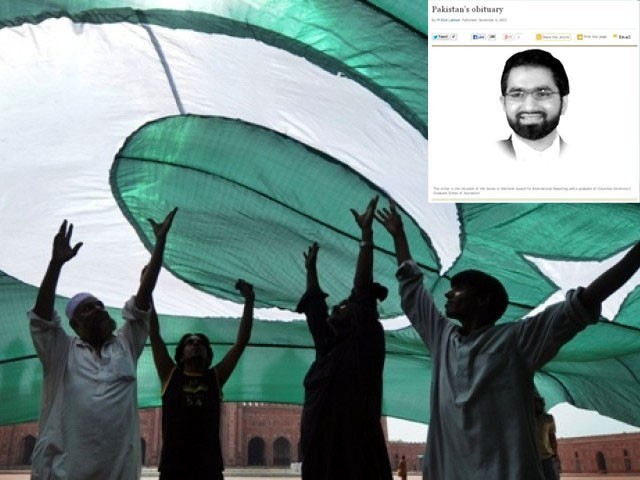 Pakistan has come so far with such little resources. Any neutral individual would appreciate the progress Pakistan has made in such a short time period. PHOTO: AFP

This is a rebuttal to Bilal Lakhani’s article titled “Pakistan’s Obituary”, published in The Express Tribune on November 6, 2003. The esteemed author has rendered the verdict that Pakistan had been afflicted with a fatal cancer and has now lost the battle for survival.

Mr Lakhani has masterfully used analogies from the medical field to substantiate the salient premise of his article – which, in a nutshell, is that Pakistan’s lifeline has expired.

Although quite eloquent with his expression, Mr Lakhani has failed to address the issue from a logical perspective. Instead, Mr Lakhani’s article is ripe with speculations and jugglery of adjectives.

The article is also a piece invested with logical fallacies, masqueraded under artistic expression and creative phraseology. His premise is not only surreal but also lacks credibility due to lack of evidence to substantiate his claims.

The article starts off with an historical fallacy when he states that Pakistan’s birth was a miracle.

On the contrary, the birth of Pakistan was anything but. It started with a dream by Dr Allama Iqbal in as early as the 1900s and culminated with the efforts of Muhammad Ali Jinnah in 1947.

It also involved meritorious struggle by other individuals, like Sir Syed Ahmed Khan, Maulana Muhammad Ali Jauhar and Liaquat Ali Khan, to name a few. Talk to a senior citizen in their 80s and they would narrate the tales of the ‘birth pangs’ that still haunt the memory and are afresh. The partition displaced 12 million people.

This is not a birth by miracle – this is birth by planning.

He further states that,

I agree that the system does not exist. However, that is what the 180 million people, 59 percent of which are in the age bracket of 15-64 years, are determined and keen to change. The youth of Pakistan have the calibre and the determination to change this country for the better and that is what they have set out to do. Please do not under estimate such a dynamic and zealous group by stereotyping them as “armchair rebels”. Here is a list of youth initiatives in Pakistan.

How can someone be afraid of death and fearful of life simultaneously is the singular fallacy that provoked me to write this rebuttal. Even if we were to take the statement for this rhetorical value, which is more sentimental than factual, Mr Lakhani does not provide any evidence to substantiate his claim. He moves on to state that Pakistan was never decisive despite being bestowed with numerous natural resources and a talented workforce.

Is that not what choice is all about in the first place?

You pick and choose and try the alternatives. There is always a risk as the result is never guaranteed.

Pakistan tried its best but got tangled up in religious turbulence and duality of character which landed it in the quagmire it is in today. Nonetheless, it would be extremely hypocritical to cast all blame on Pakistan, for when has Pakistan ever been in total control of its foreign policy – especially at a global scale?

Another preposterous accusation by Mr Lakhani is that,

“The country loved to be at the centre of the world’s attention, even if it was usually for all the wrong reasons.”

Pakistan never ‘loved to be at the centre of the world’s attention, even if it was usually for all the wrong reasons’. Only a truly mad entity would want that.

Pakistan has produced brilliant scientists, athletes, academics and professionals who went on to earn accolades for the country. Dr Abdus Salam is the product of Pakistan and so are numerous others who have graced the international scene under the banner of Pakistaniyat. If Pakistan has always been in the spotlight for all the wrong reasons, that is the deliberate attempt of the international media to malign the country.

Let us not forget the global resources that are at stake here.

Pakistan has the strongest military capacity of the entire Muslim World. Throw in the nuclear prowess, and that is a lethal match for any enemy to face. Pakistan also lies at the hinterlands of the economies of the future, namely China and India. Pakistan’s friendship with China and India’s less than friendly relations with China all promoted towards generating animosity towards the country. Pakistan has all the rights ingredients; unfortunately, the ingredients were miss-apportioned.

Furthermore, Jinnah departed for the heavenly abode when Pakistan was still in its infancy. Leadership suffered another blow when Liaquat Ali Khan was assassinated in 1951. With no role models to learn from, a neutral observer would agree that the country did manage to fare quite well. To have survived this long is testament to the resilience of the wonderful people of Pakistan.

The esteemed author does acknowledge that when he says,

“Pakistan accomplished a lot in its brief but eventful existence.”

I thank him for his generous acknowledgement.

However, how come it never occurred to the gentleman that if a country that was resource deprived in 1947 could manage to “accomplish a lot” and that too in a “brief” period? And, brilliant as it was, how was such graceful progress interrupted so disgracefully?

The writer needs to answer this question clearly. Can the respected author quote one example from history where any nation worth its salt transformed into an enlightened and progressive society without passing through a phase of moral, ethical and institutional decline? I can guarantee not a single example, for it is our failures that serve as lessons for future successes. And that is exactly where the country is headed.

The pace may be slow by Columbia University’s standards but the majority of the population prefers a steady approach, rather than a haphazard and adhoc one.

All in all, the article has not provided a single fact, other than reference to first female prime minster and Mr Abdul Sattar Edhi.

The article is fancy oratory that is better suited to a speech in a defame-Pakistan campaign.

What about the daily massacre of our troops across the LoC?

This article would de-motivate the talented men and women of the forces foremost. I say this because the words originate from a globally renowned journalist, and hence, would inevitably grace the viewership of countless variety.

Second, he has haughtily downplayed the achievements of Pakistanis such as Arfa Karim, Malala Yousufzai, Waseem Akram, Javed Miandad, Jahangir Khan and others like them.

Is he familiar with Shabana Akhtar, who was the first Pakistani athlete at the Olympics way back in 1996?

Do the names such as Naseem Hamid, Noor Jehan and Nusrat Fateh Ali Khan ring a bell?

Does he know who Farhan Masood is?

Is he aware of the huge Pakistani diaspora that directly and indirectly contributes to ensure that Pakistan continues to make strides even in the face of the strongest of the animosities?

How come he never acknowledged how the whole country came together, despite our constantly clashing perspectives and differences, during the earthquakes in 2005 and 2008? Did it not strike the author even the tiniest bit that his article would not only demoralise the people but also cut right through their sentiments, pierce their hearts and render wounds that would probably be never healed?

For only the physical wounds can heal, intangible ones such as those inflicted by Mr Lakhani would forever hound these brave men and women of Pakistan.

The entire premise of the article is based on an assumption that Pakistan has ceased to exist.

On the contrary, Pakistan has just been reborn.

We witnessed the first democratic transition in the history of our country. We see a constant improvement in the institutional infrastructure. This may be slow but the process has commenced, which should be sufficient evidence to demonstrate that Pakistan continues to rise despite all that the world has against it.

Pakistan continues to shine against all the odds and it continues to inspire millions and billions to carry on amidst all the chaos that the society is in today. The nation has survived and analysts like Mr Lakhani should be more prudent of what they state because their words can ultimately dishearten the nation.

Nations have always undergone extreme volatile conditions before entering into an enlightened and progressive phase.

The period before European renaissance was quite similar to what we witness in Pakistan today. It was only in 1920 that women were officially allowed to vote in the United States and racial segregation was the de facto social custom as recently as the 1950’s.

History is replete with examples where nations learned from experiences and transformed to add value to this world. So, let us not be too swift to render an obituary for a country that has already proven its resilience in the face of the worst crises to have plagued this world since probably World War II.

In the end, I would urge the author to never discount the fact that we are a 180 million strong nation with patriotism that is unmatched. We have risen together as Pakistanis when the situation called for it (such as seen during the earthquakes) and we would continue to do so in the face of the worst of the adversaries.