Why is the value of the Rupee depreciating, your honour? 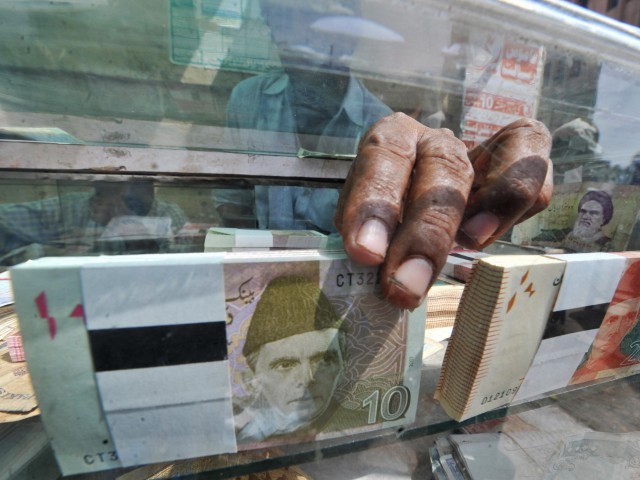 The State Bank can stabilise the market by selling US dollars in the market which basically maintains equilibrium between the demand and supply of US dollars. PHOTO: AFP

“Could you please explain to the committee the factors that have resulted in the sharp depreciation of the Pak Rupee recently? In addition, please enlighten the honourable members of parliament about the possible measures the government is likely to take in order to avoid this in the foreseeable future,” inquired the Chairperson of the Senate Standing Committee on Finance.

This was the moment I had been waiting for since the day I started my research associate-ship in Pakistan’s Upper House of Parliament, the Senate. I was, finally, about to see the executive being held accountable by the representatives of the people. The bureaucrats present at the meeting, however, justified their response quite shrewdly.

A senior bureaucrat replied saying that any statement or views expressed by the finance ministry officials or by the governor of the State Bank of Pakistan (SBP) may lead to more volatility in the foreign exchange market. Hence, any detailed discussion must be avoided.

The question I boggled my mind, which several senators also raised, was that if such excuses are so regularly employed by the bureaucracy and other government functionaries then how is the parliament going to hold the executive accountable?

Someone suggested that a private meeting should be held in order to obtain a detailed briefing from relevant officials. As expected, no such meeting took place. The officials present, escaped the rigorous questioning that senators are usually subjected to, having employed one simple statement,

“It’s not in the national interest.”

So, let us analyse the argument which was proposed by the bureaucracy that day.

Was the argument reasonable?

I found it immensely surprising that the executive branch of the state refused, so clearly, to answer the questions put forward by the legislature of the country. In this case, the oversight function of parliament would be reduced to just a theoretical concept. If members of parliament cannot exercise their right to question the executive or hold it accountable for its decisions and actions, who can?

It is no wonder that the Supreme Court ends up taking suo motu action so often. If the parliament fails to be proactive, someone has to be! What surprised me further was the reason cited by the officials present as explained by a senior bureaucrat.

A currency usually takes a sharp beating when speculators bet against it and start purchasing, in Pakistan’s case, US Dollars. This leads to a reduction in the value of the Pak rupee. The State Bank can stabilise the market by selling US Dollars to the market basically maintaining equilibrium between the demand and supply of US Dollars. However, if such adverse news spreads, chaos may reign.

Any statements made by the governor of the SBP indicating his helplessness or despair may add fuel to the fire, causing the speculators to exploit this weakness exhibited by persistently betting against the Pak rupee. Hence, in such adverse circumstances, silence is considered to be the best response. The fact that there are people in the country who love to profit at the expense of the motherland was something I found truly astonishing.

The government, apparently, does not consider it appropriate to financially penalise those who bet against the country’s currency at a time when Pakistan’s foreign exchange reserves have decreased significantly. An International Monetary Fund (IMF) bailout had to be obtained in order to protect the exchange rate from further depreciating.

Perhaps, a harsher capital gains tax or some other regulations, in order to discourage people from indulging in speculation, are nowhere to be seen on the agenda of the government. It appears that the government’s economic ideology is more in line with the “Washington Consensus”, the policies of privatisation, deregulation and liberalisation, instead of impartially analysing the issues that are now plaguing Pakistan. Strong measures need to be taken to ensure such crises do not resurface in the future.

Adam Smith, a moral philosopher and pioneer of political economy, believed that the self-interest of the common man ultimately benefits the entire nation far more as compared to the actions of the person who voluntarily decides to promote other people’s interests. This theory of the invisible hand has failed to show its efficacy as far as Pakistan is concerned. It seems that the self-interest of an ordinary Pakistani is way too poisonous and beastly to be tamed by the invisible hand, especially the speculators in our midst.

How can we criticise our politicians of being insincere to the country when we ourselves are not faithful to our own Pak sar zameen?

It’s apparent that change originates from the heart of a common man and then spreads to the entire nation. Revolution starting from the lower strata of society is what the objective of this nation should be- not the redundant debate examining the pros and cons of toppling the government.

The Arabs have come to realise this fact after havoc wreaked their societies due to the Arab Spring of 2011. Look at how they have gotten back up, not to forget the funding even we receive from them.

A Research Associate at Senate who is assisting the Standing Committee on Finance, he is profoundly interested in exploring and researching Pakistan's economic and political issues.