I am Pakistani, whether I speak Urdu or Punjabi 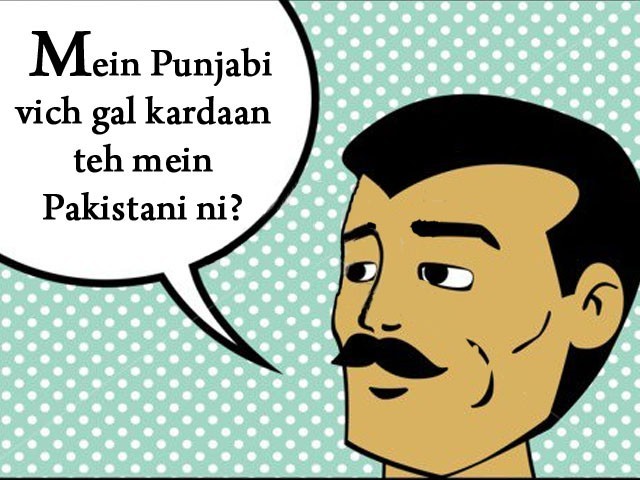 Questioning the loyalty and ‘desi-ness’, for the perceived crime of improperly pronouncing Urdu words, is simply unacceptable.

We are not a sitar with a single string, and our music takes more than one chord to make. We are a convergence of languages and cultures, all of which are simply too lustrous to be overshadowed by any single one.

Yet Urdu is not considered a language; it is an apparatus used to measure patriotism. It is a test that is used to verify one’s allegiance to our green and white flag.

Isn’t this an awkward status to have bestowed upon Urdu, considering hardly eight percent of Pakistanis speak it as their mother tongue?

On the other hand, Punjabi happens to be the first language of 44% of Pakistanis. It is what they comfortably speaking at home, that is, when they are not busy using Urdu to affirm their ‘Pakistani-ness’ to the rest of the nation.

It is this affirmation that we did not receive from our now-separated eastern half, which insisted on speaking Bengali. Although it would be sinfully simplistic to claim that East Pakistan broke off due to a failure to add Bengali to our holy pedestal of official languages, there are very few who say that West Pakistan’s lack of resilience in this matter did not stoke the flames in 1971.

Perhaps our fault lies in the fact that we often impart more meaning to a language than is necessary. After all, English has been unofficially dubbed the language of the elite, and many pompously speak it to impress upon the listener the quality of education that they have received. Similarly, a person may speak Urdu to remind us of his love for Pakistan.

While there are many who mourn the imagined death of Urdu language and literature, there are few who lament the decimation of Punjabi. Once the wand with which Bulleh Shah cast his culture-enriching magic, Punjabi is now a language of uneducated village folk best known for jugat, or witty banter.

The fact that I can even name a few Punjabi poets is heartening, because I do not think that I can even name Bulleh Shah’s counterpart for the Balochi language. God alone knows which dead or dying languages there are in the south, trampled beneath the feet of the giants that are English and Urdu. My sincere gratitude goes out to whichever chirping cricket is offering them company at their death beds.

If these dismal metaphors upset you, here is another theory for you to consider.

Our languages are not dying – rather, they are evolving.

They are flowing into one another, donating words and importing phrases.

This adulteration is not an injustice unique to Urdu; it is something that all languages go through. A case in point is the multitude of blogs, articles and newspaper columns criticising the ‘destruction’ of the English language by internet jargon.

Yes, Urdu plays a significant role in Pakistan, being the common language which allows a Sindhi and a Pashtun to communicate with words, rather than awkward gestures. However, excessive glorification of Urdu as being symbolic of one’s Pakistani nationality is frankly an insult to the non-Urdu speaking citizens of this country.

Questioning their loyalty and ‘desi-ness’, for the perceived crime of improperly pronouncing Urdu words, is simply unacceptable.