When did Malala become a geo-political and defence expert? 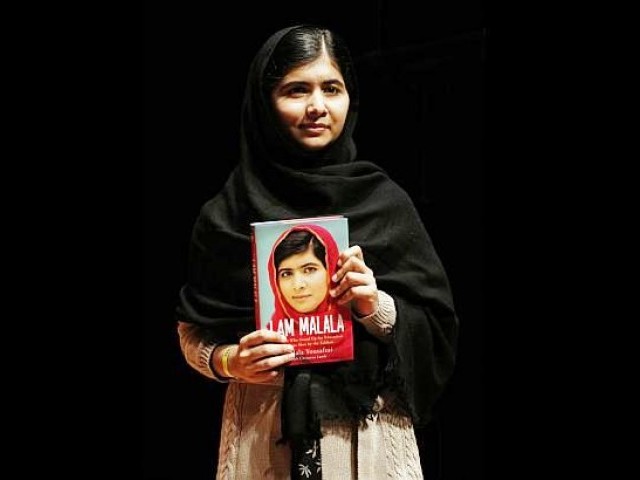 The book seemed to have been written by her father and should have probably been called I am Ziauddin, considering all the experiences and opinions seem to be heavily influenced by him. PHOTO: REUTERS

Malala Yousafzai, the 16-year-old girl who was shot last year by the Taliban gained international fame for her memoir – a multi-million dollar book titled I am Malala: The Girl Who Stood Up for Education and Was Shot by the Taliban. However, in Pakistan, a large proportion of the populace has labelled it to be a controversial book as well as a disgrace to the country.

Co-authored with British journalist Christina Lamb, I am Malala, has propelled its readers to talk either in favour of it or against it. Although many of her fans were excited to read it, the book ended up disappointing a major section of Pakistani society and has strengthened the belief that Malala is a ‘western puppet, agent and/or mouthpiece being used to defame Pakistan and its ideology’.

Malala begins her memoir from the day she was shot by the Taliban on October 9, 2012. The book then goes on to give a picture of her and her family’s life, particularly her father’s, before and during Taliban presence in Swat. It then unveils her likes and dislikes for instance, the Twilight series novels, the Ugly Betty show, Indian TV shows and Master Chef, to name a few. The book also touches upon her ambition to become a politician in the future.

The memoir reveals the early life of her father, Ziauddin Yousafzai and his involvement in the Pakhtoon Student Federation (PSF) and Islamic fundamentalism. It encompasses many details of her life from her being inspired by Khan Abdul Ghaffar Khan, to a boy’s interest in her; from floggings in her area by the Taliban, to her campaign for girls’ education, and finally to receiving death threats – the book tells it all.

The book focuses quite a bit on the incidents during General Ziaul Haq’s era – his Islamisation drive, introduction of the Hudood Ordinance and his foreign policy. She even describes his physical appearance in the book on page 23,

“He was a scary man with dark panda shadows around his eyes, large teeth that seemed to stand to attention and hair pomaded flat on his head.”

Describing his political ideology, she writes on page 24,

“Our history textbooks were rewritten to describe Pakistan as a fortress of Islam, which made it seem as if we had existed far longer than since 1947.”

Moreover, she adds on page 25 that Zia made Afghanistan a rallying point not only for the west, that wanted to stop the spread of communism from the Soviet Union, but also for Muslims from Sudan to Tajikistan.

Unfortunately, the book strays a little to cover the Russian invasion of Afghanistan in 1979 and the role of the Inter Services Intelligence (ISI) to train Afghan refugees recruited as resistance fighters or mujahideen. She writes on page 25,

“Colonel Imam, the officer heading the programme, complained that trying to organise them was like weighing frogs.”

It is funny to read her attempt (or more accurately Lamb’s attempt?) at becoming a geo-political and defence expert as she adds details about the Cold War, the Shah of Iran and the Iranian Revolution.

She then goes on to dissect the Central Intelligence Agency’s (CIA) tactics, General Zia’s meetings with President Ronald Regan and Prime Minister Margaret Thatcher; and how money poured in from all over the Arab world, including from Saudi millionaire Osama bin Laden.

She also goes on to describe on page 55 how the Taliban, led by the ‘one-eyed mullah’, that is Mullah Omar, had taken over Afghanistan.

Unfortunately, Malala — or the book’s real author(s) — portrayed deep ethnic disparity at many stages in the book, like on page 26 when she wrote,

“We Pashtuns are split between Pakistan and Afghanistan and don’t really recognise the border.”

She also wrote passionately on page 45 about how her father and his friends wore black armbands on Pakistan’s 50th Independence Day since,

“There was nothing to celebrate as Swat had only suffered since it had merged with Pakistan.”

Possibly the worst line in the book in my opinion appeared on page 62,

“You can see why the people of Swat did not always think it was a good idea to be part of Pakistan.”

I do not disagree with what Malala is trying to say here, but what annoys me is that she does not back this statement with significant facts.

Then, the skillful historian that she — or the actual author of this book — is, explores the background of the 9/11 incident and the ISI’s double dealing with the Taliban’s Quetta sanctuary, Mullah Omar, Tora Bora, strategic assets, American aid, NATO and Khalid Sheikh Mohammad.

She also wrote quite authoritatively on page 82 about the ISI’s close links with militant parties – Jamaatul Dawa (JuD) and Lashkar-e-Taiba (LeT).

What disturbed me most was that while there is rich detail about incidents Malala knows nothing about, there is no explanation for how she and her father ended up in a meeting with Ambassador Richard Holbrooke. The photos from that meeting were the basis for a massive propaganda campaign against her — why is it not addressed?

Ignoring this meeting, she discusses the Raymond Davis episode and Abbottabad operation which resulted in the death of Osama bin Laden, in a lot of detail from pages 175-176. Malala also felt the unnecessary need to discuss sectarian violence, Mohajir-Pashtun clashes and the Saraiki-movement in her memoir.

It is not easy for the reader to reconcile the image of the young girl holding a teddy bear in the hospital with this apparent expertise on world strategic issues and politics. I was quite taken aback by her proficient analysis of the pros and cons on defence and strategy – something that even big names in the field hesitate to discuss.

As a reader, I failed to understand why Malala felt the need to express her resentment against Pakistan’s institutions such as the army and politicians. It seemed the entire book was centered on the thought-process of a ‘Pashtun nationalist’.

I could sense a deliberate focus on army bashing, albeit under the cover of female education. This was surprising because according to page 164 of her book, the military actually responded promptly to Malala’s email and gave Rs 1,100,000 in order to help her father pay salaries in his school.

Moreover, the Combined Military Hospital (CMH) was the first one to begin life-saving efforts after she was shot.

The book seemed to have been written by her father and should have probably been called I am Ziauddin, considering all the experiences and opinions seem to be heavily influenced by him.

Although there is absolutely no harm in narrating experiences and views from one’s father, as a writer discussing the internal or foreign policies of her country on an international forum, Malala carries a huge responsibility on her tiny shoulders. Hence, if she has discussed particular events causing resentment, why has she not added a source or a reference? For instance, on page 274, talking about the escape of Osama bin Laden to Pakistan in 2001, she has not provided a source, almost goading the reader to assume that these charges have been made by someone else.

It would be easier to digest and maybe even enjoyable to read a narrative written by a teenage girl if it described only the basic points about her concerns on education, her schooling, and family-life; the terrorist shooting, her recovery and her ambitions. That she is enthusiastic about education for girls is not questioned or doubted by anyone.

However, I am Malala is so immensely full of geo-strategic politics that it fails to cover Malala’s core objective of simply portraying Swat and the rest of Pakistan in two different dimensions even before the Taliban infiltration.

She described Swat as ‘heaven’ in an interview, but failed to reproduce that sentiment in her book.

Certain issues highlighted in her book, like Salman Rushdie’s Satanic Verses, Shia-Sunni conflicts in Pakistan, Muharram and Ashura and her father’s interpretation of observing pardah (veiling) in Islam are extremely controversial. She — or whoever wrote this for her — fails to explain why she feels the need to talk about such issues.

At the end, it is not easy to understand why a 15-year-old girl, going through medical recovery needed to launch a book with thoughts so conceptually-heavy for her age in such haste.

It suggests the book is a publicity stunt by media advisers, or worse, someone is trying to use her for personal gain.