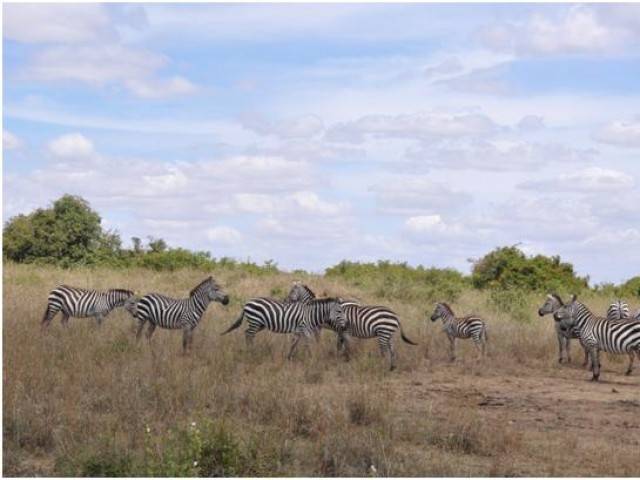 Wildlife is protected in Kenya and allowed to live in its natural habitat, while in Pakistan, animals are cruelly hunted and butchered. PHOTO: MIR BALACH BALOCH

Wildlife refers to plants and animals that have not been domesticated and exist in their natural environment. Hence, it is a national heritage and should therefore be preserved for future generations.

Wildlife also opens employment opportunities for many including in the fields of security, game reserves and lodges. In addition, some plant species are used for medicinal purposes and also provide researchers with valuable information regarding nature.

As a nature lover, I recently availed the opportunity to visit the National Park of Kenya. It would be a gross understatement to say that it was a spectacular experience! Unfortunately, it was also an eye-opener. I was struck by the jarring reality of how we, in Pakistan, are rapidly losing our rich wildlife.

There are many endangered species in Pakistan such as the mountain weasel, the mountain sheep, the forest dormouse, the black fin-less porpoise, the burrowing vole, the European otter, the marbled polecat, the fishing cat, the Goitered gazelle, the Himalayan goral, the musk deer, the Indian pangolin, the Chinese white dolphin, the Indus river dolphin, the markhor, Pallas’s cat, the red deer, the smooth-coated otter, the wild goat and many others. However, there have been no positive steps taken by the government to keep them from becoming extinct.

According to the World Wide Fund for Nature-Pakistan (WWF-P) report, some other species are also at risk including the snow leopard, the Marco Polo sheep, the woolly flying squirrel; the Siberian, sarus, demoiselle and common cranes; the marbled teal, the white-headed duck and the western tragopan.

On the other hand, Kenya is investing billions on the conservation of wildlife.

Organisations are working for the protection and security of wildlife and their natural habitat. There have been cases of rhino and elephant poaching, which is an international issue, and the whole nation has united against this action. Organisations are raising funds and creating awareness for their safety.

Contrary to such enthusiasm and involvement for the protection of wildlife in Kenya, the state of wildlife in Pakistan is depressing, to say the least. A lack of government interest and conservation policies, an increase in hunting and a basic lack of awareness has led many species of Pakistan to the brink of extinction, and even to extinction itself. Case in point are the licenses issued to the Arab royal family, permitting them to hunt and kill the Houbara Bustard in many parts of Balochistan.

The state of wildlife in Kenya, on the other hand, is absolutely astounding. The Kenyan government is fully committed to preserving wildlife since it is a major source of revenue for them. Their conservation policies are very stringent and believe it or not, armed security is provided to wildlife. It is absolutely unimaginable to kill wildlife unnecessarily because anyone who does so is held accountable.

During my visit to the park, I couldn’t help but think of how differently wildlife is treated in Kenya and Pakistan.

Here is a brief comparison:

This is a photo of a leopard in Balochistan, Pakistan.

A leopard being roughly handled in Balochistan. Photo: facebook page Save Wild Life of Beautiful Balochistan

However, the leopards in Samburu, Kenya are treated as photogenic trophies.

Butchering of wildlife in Balochistan, Pakistan.

Mass hunting and slaughter of Houbara Bustards and birds in the deserts of Balochistan.

A vulture in Pakistan.

Men carry a vulture by its wings as the crowd watches. Photo: File

A boar is being pulled by his snout in a river in Pakistan. Photo: AFP

A wild rabbit in Kenya.

Some more examples of wildlife being allowed to live in their natural habitat, without the fear of being hunted in Kenya, can be seen below:

A giraffe in its natural habitat in Kenya. Photo: Mir Balach Baloch

If Kenya can put in so much effort and investment in the protection of its wildlife and their natural habitat, why can’t Pakistan learn from them and try to be more humane towards its animal species?

“The greatness of a nation and its moral progress can be judged by the way its animals are treated.”

Perhaps, in the near future, we will start cherishing our wildlife and treat our animals with more respect.