Our nukes, their drones, our loss, their science 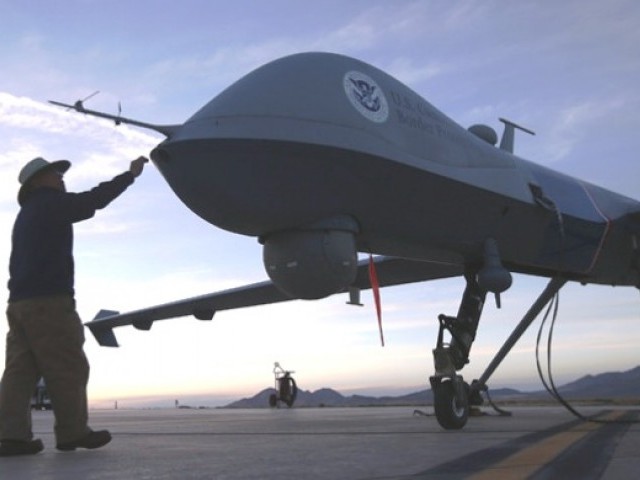 They invested in the field of science and are now reaping its benefits in the form of power, no matter how illegal and inhumane it may be. PHOTO: AFP

A news bulletin pops up on our television every now and then – showing that some region in our country – mostly the Federally Administered Tribal Agency or FATA – has been the recipient of a drone attack.

These attacks often result in considerable damage to life and property, and there have been so many of them to date that it raised some questions in my mind.

How can a country, located at least two continents away, kill anyone in our land with such impunity?

How did the US gain access to the kind of technology that is able to pinpoint individuals from 70,000 feet above the ground and then target them with such deadly precision?

Why are we not able to stop them?

Are we so meek, that we can only summon their ambassador to our Foreign Office and tell him how we ‘feel’ about violent action, rather than ordering an end to it?

The truth is that the answer to the above questions lies miles away from the theater of war.

This power is born in the cradle of science. They invested in the field of science and are now reaping its benefits in the form of power, no matter how illegal and inhumane it may be.

There is no denying the fact that science ends innocence. It gives rise to the power of questioning even the most established concepts and gnaws away at the error bar – inch by inch.

Man has always been subjected to hierarchies ever since its inception on earth. There is no doubt that power arises from obtaining something which others do not have.

Those who dominate us have acquired the weapon of science, which unfortunately, we are quite deficient in. It is not only in the field of military that we are submissive to them — in fact, we are also at their mercy in a host of other fields as well.

Although as a nation we love to boast about the delusion that our nuclear power can save and protect us from any sort of armed aggression, this belief is highly flawed because many of our nuclear contemporaries possess ten times the atomic capability of our nation. However, we continue to lean on this delusion whenever we find ourselves in a quagmire.

It is this delusion that has stopped us from evaluating ourselves as well as our current standing. As a nation, we have stopped our endeavours to succeed. Our country has not won a Nobel Prize in Science since Dr Abdus Salam was awarded with this laurel for his exceptional work in the field of physics.

History has shown that science bestows power to whosoever wishes to enter its domain and although this reward requires momentous efforts and zealous fervour, the foray is certainly worth the price tag.

The independence of scientific scepticism and its opposition towards normative wisdom makes it highly perilous to ideologies that are less self-critical. It really takes an effort to pique us.

Drones are not the only covert entity that has invaded our land. Surely, they have more in store and are most likely in the process of diversifying the components of their prowess.

Hence, investing in science – instilling the belief of its power in our countrymen – is the only resort by which we can regain our lost respect and hope to progress towards prosperity. Otherwise, we should simply abandon all hopes of solving the vast array of problems that plague us as a nation.

Of course, the other option is to stay mute and wait, as we have so far, or risk becoming the target of oppression and being put up for grabs by any swindler who happens to stroll along.

A student at Iqra University who I relishes in offbeat topics like Marxism, philosophy, cognitive psychology and astronomy.