I remember a Muharram in Quetta when we lived peacefully… 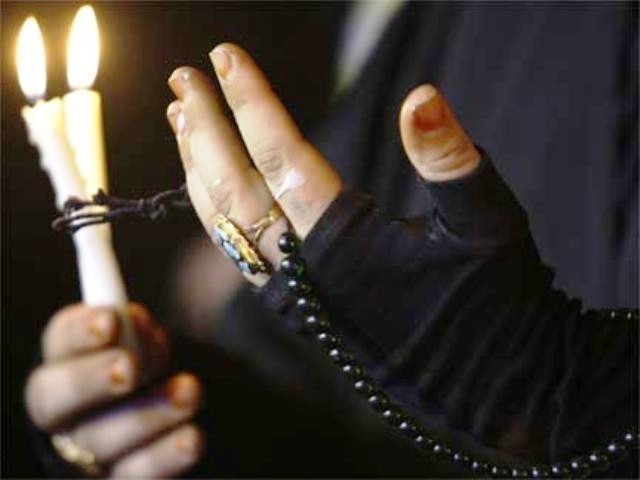 In Quetta, my neighbourhood used to be an example of religious harmony; non-Shiite Baloch, Brahvi and Pashtoon, all honoured the religious sentiments attached to the month of Muharram. PHOTO: REUTERS

Gone are the days when Muharram was observed by nearly all Muslims belonging to different sects of Islam. Now it is observed strictly under security from law enforcement agencies.

In Quetta, my neighbourhood used to be an example of religious harmony; non-Shiite Baloch, Brahvi and Pashtoon, all honoured the religious sentiments attached to the month of Muharram.

Playing football, flying kites and sharing our lunches with our friends, regardless of what sect they came from, was a part of my everyday life as a child. There was no objection from my elders regarding my routine as they used to socialise with our neighbours on a daily basis as well, which also included events such as weddings, funerals, Eids and Muharram.

No religious hatred ever existed between the people. Life was uncomplicated and harmonious.

During Muharram’s mourning processions I, being an alam (flagstaff) bearer, would take the alam inside the homes of non-Shias. The women would fasten a colourful chaadar around it to express reverence and high regard to Imam Hussain (AS). They normally didn’t take part in the matham but would attend different majalis (congregations) and distribute “Nazar-o-Niyaz” (alms) in the neighbourhood.

On Ashura, my father would take me to the stall of Bohra Muslims near Mizan Chowk where I would have a refreshing glass of rose syrup mixed with milk and black khashkhash (poppy seeds), my favourite. Barelvi Muslims would distribute a chunk of cooked lamb meat wrapped in naan; this attracted many more people, mourners and passersby alike.

A group of Pashtun brothers on Pir Abul Khair road would distribute mouth-watering biryani. The prominent stall of Ahle Sunnat with its huge banner was easily identifiable and would attract the procession of mourners to come and drink some sharbat.

Paramedic staff and scouts organisations, inclusive of both Shia and non-Shia sects, would fill up the main route of the mourning procession and in between, Sunni religious scholars were allowed to lecture the mourners on Islam. In short, Muharram was a month in which the highest form of inter-faith harmony was exhibited.

The peaceful religious environment started decaying when religion was politicised by both Khomeini’s agenda from Iran, and General Ziaul Haq’s efforts in Pakistan. Instead of bridging the gap between the different sects in society, religion was used to incite detestation.

It was on July 6, 1985 that the accumulated impact of such a path were realised. I was at school and still remember that it was during my maths class that some parents along with a headmaster entered the class and asked all the Shia students to go home. We weren’t told much about why we were being sent home except that there had been some firing near the city. I arrived home safely but some of those who chose to protest for their religious rights did not return home. That day, approximately 30 people, including policemen, were killed.

This was the first big incident that made me feel truly alienated. Social calls to our previous acquaintances became limited and the harmonious neighbourhood, that we once knew, suddenly became a volcano of intolerance waiting to erupt. Love turned into hate, trust into distrust and belief to disbelief. I started to hate the change, the people who brought on the change and those who adapted to it. Unfortunately, that was all I could do – hate.

I realised, in time, that there was no saviour, no super hero, who was going to come and give us our old life back. The rifts between neighbours increased and hate was replaced with an emotion I had forgotten existed, fear. My safe haven, my home and my friends had turned against me – for a reason we never even considered talking about before.

Insecurity and fear pushed minorities even further apart. Each was forced to move to a locality where they were the majority – in order to protect themselves. Despite living within their own sects and trying desperately to keep a low profile in their own country, minorities are being targeted.

Forced conversions and marriages are pushing Hindus to migrate to India.

Blasphemy cases and bomb blasts in churches are pressurising Christians to move to the West.

Ahmadis have been declared infidels while Shias are waiting for their fate.

What option do they have left but to leave their country?

Killings, bomb blasts, kidnappings, religious intolerance and hate saturate the air of this country. Religious fanatics walk tall and proud whilst renowned professors are being framed in unjust cases.

Ironically, even under the watchful eyes of the government, these so-called religious scholars continue to preach intolerance, resentment, enmity and fanaticism. The government’s silence is being taken as tacit approval for spewing this kind of hatred and why shouldn’t it be? It is not like the government has done anything to protect the rights of their minorities.

My neighbourhood, which was a perfect example of religious harmony, has been turned into a religious cacophony. Now when I look back at those times, I feel numb. Those days were like a dream, one from which I was rudely awakened.

What is true, however, is that those days did exist and that was also Pakistan. We have the ability to live in peace, tolerance and religious harmony. But do we have the will?