When the policeman aimed his gun at us and my dad yelled ‘Shoot!’ 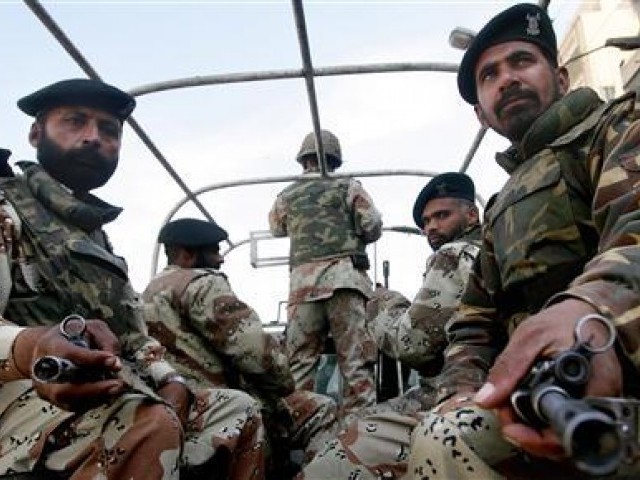 It scares me to see how Rangers and policemen think that just because they have a gun, they can boss common people like us around. PHOTO: REUTERS

It was Wednesday October 9, 2013 and I still remember how exhausted I was. I had just taken a test and was on my way back home from school. I just wanted to go home and sleep.

On Khayaban e Ghazi, we saw two police mobiles and a bulletproof prison car. We were ahead of them, and one guard on the first police mobile gave us the signal to keep moving, so we kept going. On Gizri Boulevard, we were going down the slope leading to the Saudi house; my father was driving and had indicated that he was going to make a right turn into the fifth Gizri lane.

Slowing down, to take the right turn we had indicated we were going to take, the guard in the front police mobile started screaming at us to keep moving. We did not have any chance to move as there were cars coming from the opposite side and were crossing from behind us as well. So the guard stood up on the mobile with his Kalashnikov and tried to load it.

We had no other choice but to reverse our car, which was against the law and could have caused an accident.

After doing that, he aimed his gun at us; which included me, my dad and my two friends. I was petrified. I didn’t know what to do. My dad was furious and he yelled,

After he said that, I skipped a heartbeat.

I kept thinking of that young boy Hamza Ahmed, who was shot by his friends guard because he had apparently said the same words. Hamza might have said that in anger, but I don’t think he believed that he would actually be shot. Just on one sentence, the guard opened fire and shot him for no major reason.

I actually thought that this guard might do the same because these guards don’t have control over their emotions and just do what they feel like.

We had no other option but to let the mobile pass; while passing by, all the guards gave us livid, threatening looks. The suspense was unbearable and I was fearful that they might actually do something to us. My dad had his phone in his pocket, so there was no option of taking a video or a photo. After this incident, however, we thought that we should have taken a video or a photo to report the car. In the tension of the incident, we did not even see the number plate of the mobile.

Guards, after being provided with guns and weapons, think very differently. What they think is,

‘We have been provided a gun so we are superior and can boss anyone around now’.

The police, Rangers and armed guards are all notorious for misusing their authority.

Another close incident that took place in Karachi was when a boy named Sarfraz Shah was killed by Rangers officials at Boat Basin. The unarmed youth was brutally shot even though he had surrendered completely. In this case, the Rangers were misusing their authority and they were misusing weapons.

Just because they have guns does not mean they can indulge in unlawful activities. The worst part is that the policeman tried to aim his gun at us, three kids. They think that they are above the law and can get away with any illegal action.

If those, whose very job is to protect us, make us feel so fearful, where do we go?

The author is a teenager, who likes to write and give his views and ideas on different things. He tweets as @AjayDawani1 (twitter.com/AjayDawani1)

I am 12 years old and I wish there was no child labour!