Reshma, the flower in Pakistan’s desert is dead 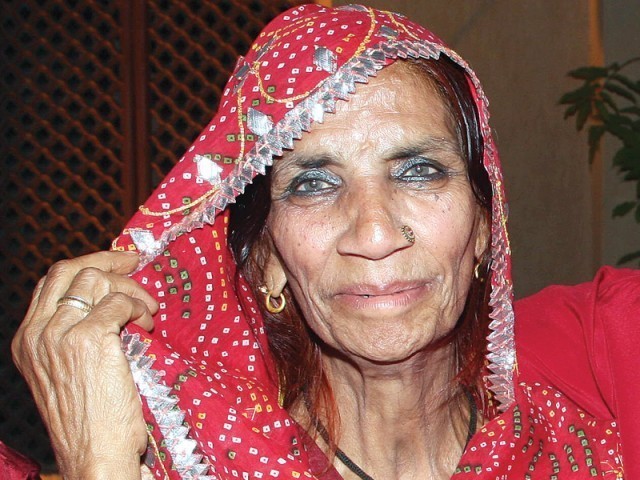 We have lost more than just a music icon; we have lost one of the most genuine, humble and honest people that this nation has ever known. PHOTO: IMRAN

One by one they are leaving us. Some left the music industry altogether, even before departing from this world, like Zubaida Khanum. Then, Iqbal Bano left us. Mehdi Hasan suffered quite a long illness before his death, leaving behind only his beautiful music; and the latest in our list of great losses is of course, Reshma.

Fortunately for us, some like Surraya Multanikar, Farida Khanum, Rubina Qureshi and Ghulam Ali are still around. Of course, everybody has to leave and in the end, it is really not about how long they lived. Rather, it is more about what they brought with them and even more importantly, the legacy that they leave behind.

Although floral wreaths placed on their graves show some level of homage, I just don’t think that they are enough of a tribute to our nation’s legends. Respect, homage and tributes need to be paid to our great artists while they are still alive. After all, these are people dedicated to keeping our culture and arts alive!

During my tenure as the head of Radio Pakistan, we promoted young talents like Sara Raza, Ali Abbas, Nadeem Abbas Lonewala, Mohan Bhagat and Moon aka Chhota Ustaad. However, there seems to be a widening gap between the contribution of our legends and the young artists of today. I believe that in order to sustain the continuity of music in our country, it is not only imperative to acknowledge the enormous contributions of our artists during their lifetime; it is also important to connect them with the young artists of the current times.

Hence, we at Radio Pakistan, decided to launch a series of programs to pay tribute to our living legends.  We did two programs on Mehdi Hasan – one in Islamabad with him on air with us, and the other in Lahore which he could not attend, but it was while he was alive. Radio Pakistan did similar programs with Zubeda Khanum, Farida Khanum, Surraya Multanikar, Rubina Qureshi and of course the great Reshma.

I still remember, during my youth, how it was Reshma who brought to life the cultural variation of Rajasthan, Cholistan and even my own Sindh, with her raw, soulful voice. For me, she was the voice of love, wanderings and peace.

In March 2012, Radio Pakistan arranged to honour her musical journey and contribution. All her contemporaries as well as young music artists assembled to pay tribute to her. Even the entire Lahore film industry along with the art and culture advocates of Lahore gathered that evening. Dressed in an orange and red outfit, Reshma appeared as lively as she used to be in her youth.

It was a tremendous honour for me to receive her. She was warm and humble, just as she always was on air. It was this complete and utter obliviousness to her own greatness that would charm people to her. As the evening of music and melody progressed, she simply couldn’t resist and eventually said to me,

We helped her onto the stage and there she was in all her unassuming glory. She gave the necessary instructions to the music crew, the instrumentalists and the percussionists; and then, proceeded to blow us away!

Although she pushed herself into singing raags that were once the hallmark of her performances, it was apparent that the effort was taking its toll on her. Nevertheless, she left her audience completely spell-bound as she sang her ever-famous Lambi Judaai. Many an eye was left tearful that night, happy at the thought that she was among us; yet, heartbroken that she might not be with us for too long.

At the end of the night, I put a woollen shawl from Sindh around her shoulders, and I will never forget the beautiful and serene smile that she gave me, saying,

I still cannot believe that Reshma is no longer with us. We have lost more than just a music icon; we have lost one of the most genuine, humble and honest people that this nation has ever known.

Rest in peace, Reshma. You were our flower of the desert, symbol of love, music and peace. We will always miss you.

Former head of Radio Pakistan and a senior journalist, he tweets as @murtazasolangi (twitter.com/murtazasolangi).