Does a woman have the right to live after her husband’s death? 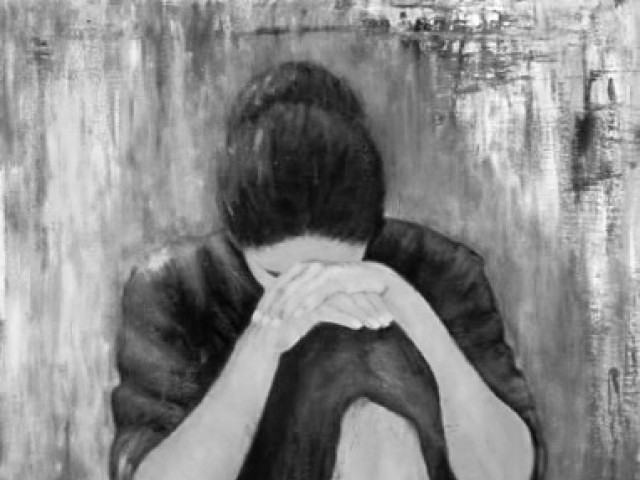 Just the fact that I was attending business meetings and dressing up in a presentable manner seemed to disqualify me from needing emotional support after my husband's death. Didn't moving on with life require me to live? A painting by Cynthia Angeles titled Grief

It was a yellow morning – a pale, sickly yellow. I looked around to find that most of the furniture had been pushed against the walls and stark, white sheets covered the floor. Tables from all over the house had been brought to this room and were laden with copies of the Holy Quran, siparas and Surah Yasin booklets.

I walked to the bathroom to splash water on my face and looking in the bathroom mirror, it hit me – I was a widow. I couldn’t believe that it was just the morning before when I had been standing in front of the same mirror, saying goodbye to my husband, for what turned out to be the last time.

Of course, I had not known then that it would be the last time that he spoke to me. He had lost his life that day – victim to a sudden cardiac arrest. We had buried him the same day.

Hence, in less than a day, without any prior preparation, I had been given a new and unwanted identity – that of a widow. I knew from seeing others that widowhood would not be easy, especially since I had lost a husband of 15 years, who happened to be my best friend as well. In just that one day, a new and strange world unfolded before me – a world of unexpected reactions and expectations. I was left confused, often hurt and sometimes reduced to tears at the dearth of emotional intelligence in people; and the stereotypical image of a widow in our society.

All my life, I have always been a fighter and a self-made entrepreneur. Hence, dealing with the practicalities of being a widow was not very difficult for me. However, dealing with the people around me – their advice, insensitive comments and pointless conversations – was another story altogether. The experience opened a whole new perspective of being a woman in Pakistani society. People seemed unable to reconcile to the idea of me being a widow and yet, a highly qualified and accomplished professional, who was independent and financially sound.

After all, most of these adjectives do not apply to the generic profile of a Pakistani widow, do they? We don’t often see women who are ahead of men in their career, power and position in Pakistan; and the few who are, gain somewhat reluctant acceptance in society.

I knew that I had to move on – to give new meaning to life, in spite of the new identity and loneliness. As much as I hated to re-plan my life anew, I knew that I had to do it for the sake of my own sanity and for my highly-spirited child – a child who was being called a ‘poor orphan’ now – much to my chagrin. I knew that I had to be strong for both of us; after all, even though my husband had died, we were still alive!

In my struggle to move on and re-build our lives, I realised how emotionally poor we are as a community. Our society interprets the meaning of ‘help and support’, as a poor or weak person being aided by those better off – where they tend to run chores and do tasks for the weak, mostly for their own personal satisfaction. However, some people, like me, have different needs. I found people around me at a loss for finding ways to support an otherwise accomplished person.

All I needed from them was emotional support; and I found that it is harder for people in our society to share their very selves. They can help others financially but find it hard to be compassionate – compassion that is ‘free’ and comes straight from the heart. Instead, I found myself being continuously hurt and emotionally traumatised. Although some people tried to appreciate me moving on with life, there were many others who would look at me snidely, mouths agape at the sight of me wearing colourful clothes. Often, I could sense the sudden change in conversation topics as I entered and at other times, I heard snippets of hurtful conversation with my very own ears.  Once I shared pictures on Facebook of a meeting that I had attended in Washington DC, and this is the remark that followed,

“Look at her, how can she smile? It hasn’t even been a year and look at how dressed up she is!”

Just the fact that I was attending business meetings, travelling and dressing up in a presentable manner seemed to disqualify me from needing any emotional support and sympathy. Simply because one tries very hard to move on with life does not mean that one is not lonely or aggrieved, does it? How can making a presentation and needing emotional support be mutually exclusive? Didn’t moving on with life require me to live?

The worst part was when I heard people saying that he died because of me.

Later, some friends explained to me that this is often the immediate reaction to a husband’s death in the subcontinent. Indignantly, I replied that I had never heard of the husband being blamed for the wife’s death.

Then, someone advised me that widows should look pious and I was left thinking that piety is a good attribute for widows and non-widows alike. However, I was willing to make the effort and inquired as to what I should do to look pious. I was told to wear the hijab and join a women’s group of dars. I had absolutely no issues with doing these; after all, it is good to be a pious, practising Muslim, isn’t it?

However, I was left wondering why I was not showered by this advice when I was not a widow.

The advice continued to pour in – like stay away from men other than your blood brothers and so forth. My question to this was,

“What do I do with the men working in my office?”

The immediate answer I received was,

“Replace them with women.”

Did these people even realise the absurdity of their suggestions? I mean, did they understand that turning my company into an all-women organisation, simply because the head of the company happened to be a widow, would call for an HR reform?

In the face of such silly advice, I couldn’t help but wonder how many widowers get similar advice. Are they advised to wear white skull-caps and ankle-length shalwars? Are they forbidden from wearing any colour? Are they advised to join dars groups?  Do they replace all the women at their workplace with men?

I’m guessing that the answer is “No”.

Then, isn’t it hypocritical to hold these stereotypes only for widows?