Gandhi or Modi: Choosing the lesser evil in elections 2014 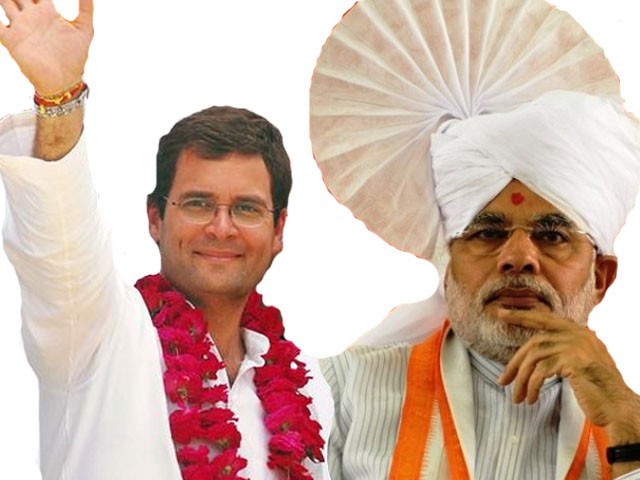 In 1998, the BJP won electoral seats by instigating religious disruption and they are attempting to repeat that feat in UP and Bihar again.

Is communalism responsible for the rise in terrorism? This is the topic of debate in India today. The attention on the issue became all the more pronounced after the serial blasts that took place in the Hindu right wing leader, Narendra Modi’s rally in Patna.

Until recently, this debate had been confined to academic discourse, but after the Congress leader Rahul Gandhi’s statement, where he said that the Pakistan’s intelligence agency is recruiting disgruntled elements from Muzaffarnagar, the debate has come into the political arena.

Those who have been closely monitoring the political speeches would understand that the younger Gandhi’s target was not the ISI. He was, in fact, referring to the devious campaign of Hindu fundamentalist forces that have led to bitter communal polarisation in some places resulting in the loss of many lives, mostly belonging to the minority community.

The Congress leader has been referring to this issue in all public speeches he has been delivering.

In August 2013, the first of their kind large scale religious riots took place in Muzaffarnagar in western Uttar Pradesh.

The Centre for Policy Research, a new Delhi based think-tank, in its reports, indicted the Bharatiya Janata Party (BJP) for inciting trouble that led to the death of more than 50 people and the displacement of hundreds of the families of the minority community. It also blamed the local government for criminal negligence. Even after two months, the area is still crippled with tension. Three BJP legislators have been arrested with regards to this incident.

Unfortunately, the riots cannot be attributed to a sudden disturbance. It may or may not be a coincidence, but the Muzaffarnagar riots started with the rise of Modi to the national level.

In the 1990’s, the BJP’s activism led to the radicalisation of many parts of the Hindu society. This also rooted fear in the Muslim community which in effect gave birth to radical Muslim organisations. Certain forces, that are inimical to India’s interests, have noticed and tried to exploit this fault line as much as possible.

When the BJP patriarch started the Ayodhya agitation, many parts of India became submerged in communal flares. Many people lost their lives and the Muslims were the ones to suffer the most. The demolition of the Babri mosque led to the 1992 riots and the serial blasts in the metropolis in 1993.

Then in 2002, the Gujarat riots took place, under the leadership of Narendra Modi. This was, under no circumstances, an accident. These riots were a clear attempt to turn the country into a majoritarian state. It was a planned attack on the minority and the subsequent ghettoisation of the Muslim in the state proves this.

The rise of the BJP in India has coincided with the rise of communalism and terrorism.

Post the 1990s, the country witnessed a number of terrorist attacks and the rise of Muslim disgruntlement. This discontent in the Muslim community is in reaction to the attack on the community by Hindu fundamentalists.

After all, what option do you have left if you are denied justice?

How would you react if a politician like Modi, whose whole political identity is based on his anti-Muslim credentials, is projected as the future leader of the nation?

The outrage is natural and understandable. But the fact that the 17% Muslim community and other minority groups are so perturbed in their own country is a major reason for concern among Indian liberals.

Support from youth and media:

What is disturbing is that Modi has been receiving an overwhelming amount of acceptability and attention from various parts of India. His popularity is increasing even though his stance, views and policies remain the same.

He is still unapologetic about his misdeeds in 2002, his majoritarian agenda and divisive politics are still intact, he speaks in the same defiant and fascist tone as before, and his bond with the fountainhead of radical Hindutva organisation, the Rashtriya Swayamsevak Sangh (RSS), has grown much stronger. The only thing that has changed is the public’s perception. People have become more inclined to follow Modi’s right wing politics.

A majority section of Indian youth, that is devoid of any historical sense and cut off from the narrative of the struggle for freedom, is willing to accept this divisive figure as a national leader.

Modi’s ascendance since June this year has disturbed the religious equilibrium in some of the most crucial states in the country, including Uttar Pradesh and Bihar. Bihar which has not seen any such disturbance in more than 15 years has recently witnessed palpable tension in certain areas.

Unfortunately, our corporate media encourages support for the radical right wing leader. The media is no longer questioning Modi’s divisive agenda – the fear that his presence invokes or the blatant lies in which he indulges.

This silence from the media has the potential to turn this country into a Hindu majoritarian state. It will embolden all those forces that want to see minorities treated as second class citizens, in effect, this will hamper the integration process which the country has been trying maintain since independence.

In 1998, the BJP won electoral seats by instigating religious disruption and they are attempting to repeat that feat in UP and Bihar again.

What India must remember is that rising communalism deepens religious fractures and leads to all kinds of consequences. The attack on Modi’s rally in Patna last week is a reflection of the anger and cry for justice by those who have suffered due to the politics of majoritarianism. It is also an outrage against the portrayal of a divisive figure like Modi as the national leader of the country.

Terrorism does not flourish in vacuum.

When Rahul Gandhi invokes the ISI name, he is only referring to the vulnerability of the country due to the widening religious gap. Modi, and for that matter other radical Hindu organisations, cannot absolve themselves from turning the country into an insecure place – not only for its minority but others too.

The coming elections in 2014 will be fought on this dominant theme. India needs to debate the issue of communalism and terrorism, and realise how one feeds the other at the political level.