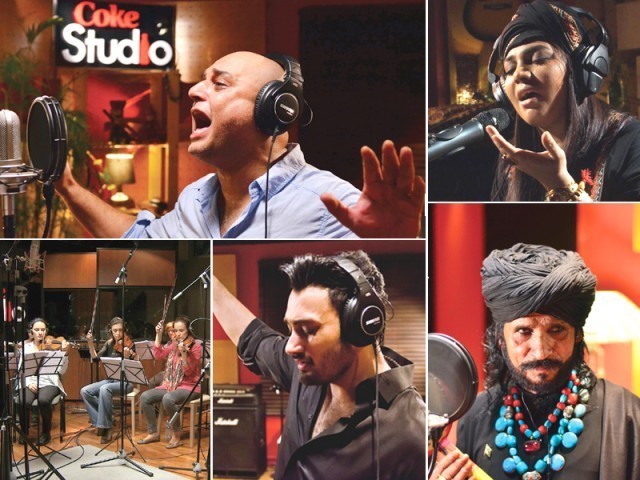 What were Ali Azmat and Rohail Hayat thinking with 'Babu Bhai'? PHOTO: PUBLICITY

It finally happened! Ali Azmat’s track was uploaded in the first episode of Coke Studio Season 6. Grinning in excitement, I clicked on the link only to hear this in a low monotone:

Yes, that is what Ali Azmat’s new song – or rather, an attempt to a song – sounded like. I could almost feel blood dripping from my ears and all I wanted to do was block out the song, if you could call it that. Quite frankly, it seemed more like musical agony to me. Music is food for the soul, they say, right? Well, not always, it seems.

I’ve been an ardent Junoon fan for as long as I can remember. So, when I heard that Ali Azmat would be part of the new Coke Studio season, I simply couldn’t wait. After all, this was the man who struck pure genius with Rahat Fateh Ali Khan when they sang Garaj Baras in the first season of the music show.

After the brilliance of that song, it was no surprise that the expectations of his listeners were now sky-high. Thus, it was even more disappointing to listen to Babu Bhai because we expected so much more. I’ll let you experience the distress for yourself by listening to this excuse of a song.

I am sure that by now you agree with my thoughts on Babu Bhai. This is what some fans had to say about it on Twitter:

What on earth is Babu Bhai. Seriously Coke Studio?! Seriously?!

Remember how Ali Azmat made songs like Pappu Yaar Tang Na Kar sound like pure gold with that powerful voice of his? Now after that, I am really not sure what he and Rohail Hayat were aiming at with the likes of Babu Bhai, no pun intended, of course. Although Pappu Yaar and Babu Bhai have the use of street-language in common, the lyrics of Babu Bhai are simply nonsensical while both, the music and rhythm lack the force that is signature of Azmat’s songs. I remember wanting to replay Pappu Yaar for its catchy beat and Ali Azmat’s compelling voice, but listening to Babu Bhai even once, was sheer torture.

Having said as much, I have loved Ali Azmat’s music for too long to just flush it down the drain because of one bad song; still, I feel as though after letting his fans down with Babu Bhai, he needs to get his act together and realise that everything that escapes his mouth will not be appreciated by his fans.

Moreover, Babu Bhai was not the only sore point in the episode; in fact, the entire episode was quite forgettable. You might, if you try really hard, end up warming to Zeb and Haniya’s Lailli Jan or Sayeen Zahoor and Sanam Marvi’s Rabba Ho; although even these didn’t really do it for me. Lailli Jan’s music and vocals came off as an attempt to do something too different – almost a bit too creative. On the other hand, Sayeen Zahoor’s singing was impactful, as always in Rabba Ho; but Sanam’s vocal skills left something to be desired.

Another thing that irked me was the use of foreign musicians this time around, especially when our own talent has been doing such a spectacular job in the earlier seasons. Coke Studio seems to be losing its concept of depicting the musical culture of Pakistan. Not only was this the essence of the show, it brought cultural diversity to the audience since a fusion of local singers and instruments was used.

Unfortunately, with the use of foreign instruments and musicians, I failed to see this ethnicity and diversity that has made Coke Studio stand out in the past. Most of the tracks seemed to carry jazz notes, rather than the local instruments and Pakistani fusion that have made Coke Studio what it is. It seems that the directors and crew have not heard the saying,

To be very honest, it sounded a lot like I was listening to the Indian version of Coke Studio and that is really saying something. I am pretty sure that if there was ever an All Time Top-20 Coke Studio list compiled, none of this season’s first episode songs would make it; yes, they were that bad.

Like most Pakistanis, I take pride in the Coke Studio concept – in its music and musicians. In the past, they have shown us the heights that they are capable of reaching, and I hope that future episodes fare better than the first one.

To Ali Azmat, this is what I have to say,

Note: I would like to clarify that this is by no means a hate mail; it is simply a loyal fan’s expression of disappointment after having being spoiled for so long by the high music standards set by Ali Azmat, Rohail Hayat and Co.