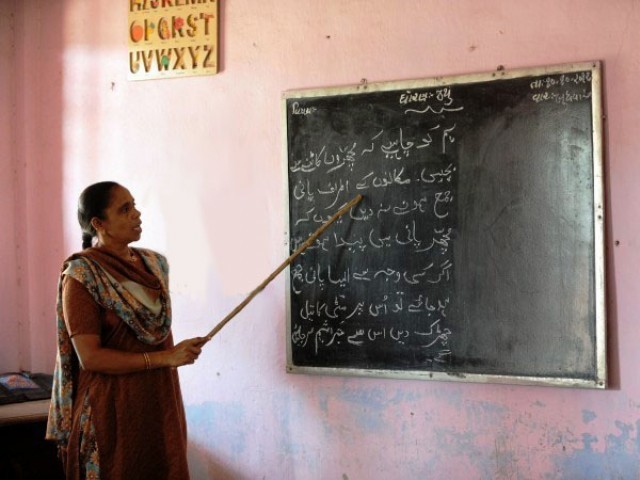 Parents today feel proud when their children are fluent in English, but have little or no hold over Urdu. This is wrong and degrading for our national language. PHOTO: AFP

Recently, a comment made on the language that is a part of our identity, Urdu, left me in utter shock.

A friend of mine told me about an incident that took place with his sister, who’s an Urdu teacher for grade one and two in Lahore. A student, in one of her classes, was refusing to speak in Urdu during the period. When she asked him as to why he was being so difficult, his response was nothing less than shocking and disappointing.

‘My mom told me that Urdu is a servant’s language’

Please take a moment, sit back and let that phrase sink in.

The language that was used to bring about change and which is respected all over the world is now considered unspeakable by the Pakistani elite.

Infuriated with this remark, my friend’s sister requested a meeting with the child’s mother and, lo and behold, the audacity of the mother when confronted with this news was even more startling.

“Well, I will allow my son to speak in Urdu while in your class only, but you do realise that if my son is to get anywhere in this country, leave alone the world, he must be fluent in English. Urdu for him is not important, at all.”

I am ashamed of myself to admit this, but don’t you think she has a point?

I mean look at our job market. You might not know anything about the job but, if you can speak English, you’ll be preferred over the rest.

Let’s say you and another candidate have the same knowledge base, but you’re fluent in English and he’s not, who do you think will get the job?

Even on our so-called Urdu channels, we see the younger generation speaking in Minglish – partial Urdu and a whole lot of English.

I remember attending a guest lecture by Zia Mohyeddin, where the topic of discussion was ‘our identity’. He said that he would conduct half the lecture in English and the other half in Urdu. The man did just that. Throughout the two hours, he did not use one language mixed with the other.

His point was simple – know who you are, respect where you come from and give importance to knowledge and one way to do that is to respect the different languages you speak.

Although I was born in Rawalpindi, most of my early years have been spent abroad. When I was four-years-old, my family decided to move to Hong Kong, where we stayed for eight years and then moved back to Lahore. During this time, I had spent a little over seven years in a British school with English as the only mode of communication and it wasn’t until we were back in Pakistan that I actually got a chance to read Urdu.

Sure we read the Quran, hence we were aware of the written characters and of course the language spoken at home was Urdu, but we weren’t given a chance to spend a lot of time on learning Urdu since we were too busy learning English.

It is one of my biggest regrets that I don’t know how to read my own mother tongue properly. While my friends speak volumes on the beauty of our language, I’m oblivious to most of it.

From the passionate words of Allama Iqbal and Faiz Ahmed Faiz to the pain and disappointment portrayed in Habib Jalib’s poetry and the importance of love and compassion shared by Mir Taqi Mir, I am ignorant of it all.

Even the works of living legends like Bano Qudsia, Anwar Maqsood and Zia Mohyeddin are pieces which I don’t ever remember reading.

That being said, I respect my language a lot and I would want my daughter to speak it fluently while growing up. I plan to share with her as much as I can from the masterpieces of our great Urdu literature.

Not all parents feel this way.

When I look at our nation I notice the increasing importance given to English and the vilification of Urdu, and it begins with the mindset that you see in this particular case. The mother is adamant that without English, her child is going nowhere and achieving nothing.

I wonder who is to blame – ourselves as parents, or the institutions that have shaped us this way?