Thank you Faf du Plessis for showing us that the ICC cares… about you! 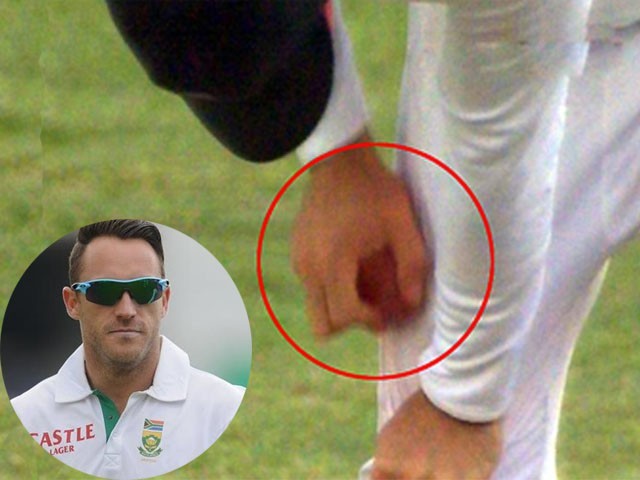 But you, dear Faf, must find yourself very fortunate to not have been ban from any future matches. Apparently that punishment is reserved strictly for our Pakistani players!

First of all, one must congratulate you for imparting a unique idea of utilising the trouser zip for tampering with the cricket ball. In the past, some ‘enthusiasts’ had tried Pepsi bottle tops, dirt/dust in the pockets, finger nails, and even teeth, but none had used a trouser’s zip before.

Once upon a time in Australia, our Afridi “Lala” had tried to chew and/or bite the ball in frustration after several defeats, but he couldn’t hide it from any of the cameras installed across the ground. As a result, he was fined for two T20 matches. At least, a colourless and transparent zip can still be hidden from half of those cameras. Your efficiency goes far and beyond any previous notable attempts. Well done!

By the way, Faf, what was going on in your mind when this groundbreaking idea popped in to your head?

Your team was in an unassailable position in the Test match. Perhaps, it was the Dubai-heat that got to you or maybe, you just wanted an early break from a boring match, where you couldn’t score any noteworthy runs. After all, in a caldron like the Dubai cricket stadium, one can even fry an egg without a stove!

However, I am still in the process of comprehending the logic behind your act of genius.

Hang on, did you do it because you wanted to give this match some sort of historical significance?

That was definitely the reason, right?

Nevertheless, now you can count yourself in an unparalleled club of some of the best players of the game; Waqar Younis, Shoaib Akhtar, Shahid Afridi, Sachin Tendulkar, and Mike Atherton, who have all been previously accused of tampering with the ball. Finally, do not worry about those five penalty runs consequently docked from your team, since your captain, Graeme Smith, and his deputy, AB De Villiers, scored them aplenty.

But you, dear Faf, must find yourself very fortunate to not have been ban from any future matches. Apparently this punishment is reserved strictly for our Pakistani players, like “Lala” and Akhtar. Akhtar, who was banned for two one-day matches and fined 75 percent of his match fee for tampering during a tri-series in Sri Lanka in 2003, said,

“I am surprised at the decision.”

But I am sure you will not lose any sleep over a 50 percent match fee deduction. Apparently, nobody loses their temper when Faf tampers with the ball. In fact, people, like vice-captain AB De Villiers, defend Faf with a rather naïve statement like,

“Honestly, we’re not the team that scratches the ball.”

After reading this statement, one is compelled to scratch one’s head. Not only me, but umpires Rod Tucker, Ian Gould, ICC match referee, spectators and audience alike were caught scratching their heads. He further added to his statement,

“I know Faffy very well, he’s the last man to try anything like that, it is part of his responsibility to shine the ball and to get it to swing and to look it after, it’s not an easy job, I thought he did it very well.”

How very cute and naïve, for our beloved AB to stand up for his team-mate! I am not sure whether Faf is the “last man” who would try something like that, but he was definitely the first to try his pant zipper and on that note, I agree with you, “he did it very well”.

I am happy that you, AB, are not the captain of your team though, otherwise you may have enacted “the Inzi” by leaving the ground premises and walking away with the team in protest. But that would have meant a possible forfeiture of the match and your team could lose a series against a team that was bowled out for just 99 in its first innings. You wouldn’t do that, now would you?

A rather satisfying fact is that Pakistan is not the only green team that has been associated to such controversies; although had it been our Pakistani green team, the clamour would have been much louder! The other “green team” is also often not far behind. Historically, South Africa has proportionally (if not equally) choked on important cricketing occasions. Similar to their green counterparts, South Africa has also been involved in the worst match-fixing scandals and the recent ball-tampering scandal must serve as another unwanted feather in their green caps.

As I finalise these lines, the Test match has already come to its logical conclusion; Pakistan has lost it by an innings and 92 runs. The series is mutually shared. It was a beautiful Test match and it will be remembered for a phenomenal partnership between AB De Villiers and Graeme Smith, Imran Tahir’s comeback heroics, and Asad Shafique’s excellent rearguard century.

Simultaneously, however, this Test match will also go down in history as the match in which the ball was tampered with a zipper for the first time ever and the day the ICC decided to ‘lenient’ instead of sticking to precedent. So thank you Faf – you gave us a reason other than our loss to remember this match. We are forever grateful.