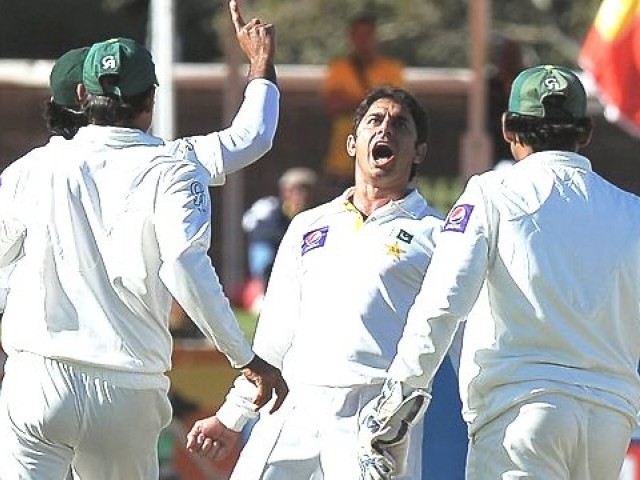 Aiding Irfan was a gifted spin attack spearheaded by Saeed Ajmal, by far one of the best off spinners in the world. PHOTO: AFP

Jubilant scenes were witnessed at Abu Dhabi last week, as Pakistan’s cricket enthusiasts had something to cheer about. A convincing seven wicket victory over the Proteas in the first Test is enough to wither the horrors of the Harare upset at the hands of Zimbabwe.

The green shirts have always been like that. One bad game, a paranoid batting display and erratic bowling might lead many pundits to question the professional strength of a Pakistani side. Yet, on a different day, the same side may surprise, call it an upset or rising from the dust, or something else, the entire body language of the unit falls into place. The slump gives way to a boom. The batsmen find their feet, wilfully caressing the ball into gaps, while the bowlers discover their long lost corridors of uncertainty, as the team begins to outclass its opponents.

Misbah’s camp accomplished just that in the unforgiving heat of the desert.

A lot went right for Pakistan. The South Africans batted first and were bundled up inside 250 runs in the first innings, courtesy to some skilful bowling by the Pakistanis. The giant Irfan commanded steep bounce from an otherwise placid wicket. His sharp rise from good length troubled the very best in the South African rank. A seven footer, hurling down from an eight feet corridor is a nightmare for any batsmen in the world. He used his height and a quick arm action to his advantage, reaping three wickets while maintaining an excellent economy rate of 2.40.

Aiding Irfan was a gifted spin attack spearheaded by Saeed Ajmal, by far one of the best off spinners in the world. He, along with the debutant left arm Zulfiqar Babar, kept the South Africans guessing. Pakistan began its innings riding on the back of two new openers, Shan Masood and Khurram Manzoor. Both steered the ship well, inflicting a much needed nail in the coffin.

A century opening stand had pretty much set the tone of the match. Both the openers looked solid in defence and yet were quick to latch on to loose deliveries. In the middle order, Azhar departed cheaply, while Younis cursed his luck on receiving a stunner from Morkel. Misbah once again steadied the proceedings and together with Asad Shafiq put another decent partnership. Misbah’s imperturbable consistency with the bat climbed new heights as he notched up his fourth Test hundred.

Pakistan’s bowling department carried on from where they had left off in the first innings. Irfan and Junaid were quick, muscling in speeds of over 140 km. The two pacers bowled at a nagging length, managing to dig holes into the batting line up. Soon the spin attack came to the fore, exploiting the conditions to perfection. Wickets tumbled and rumbled as the Proteas once again were found wanting for runs. An easy victory for the green shirts was inevitable.

A target of only 40 runs was chased down, although the chasing was not without a few scares. Pakistan won by seven wickets.

With less than two days to go before the two teams round up for another battle in the second Test, Pakistan must let bygones be bygones. A first Test victory should not let the troops take a breather. Pakistan has always been tagged as an inconsistent outfit and they have ensured they live up to that reputation. This has been the case, either through some serious lapse in concentration or some poor man’s curse. However, I disagree with the Manager of the Pakistan Cricket camp, Moin Khan, who soon after victory hinted at fielding the same winning combination in the second Test.

A point that must be asserted is, had the Pakistan openers not delivered in the first innings and left the boat at the mercy of Azhar Ali and Younus Khan, the story would not have been without a twist at the end. Azhar Ali in particular is known to be a compact player, with unflappable levels of concentration. Apart from this there is not much unique about the lad to consistently hand him the number three spot in the batting order. At number three, Pakistan’s needs a natural stroke player. A player who doesn’t only possess the temperament to stay long in the middle but also one who has the ability to change gears and score runs swiftly. Here I believe that the left handed Umar Amin would be a far better option than the out of form Azhar.

The fact that Dale Steyn failed to make hay in the first Test should be a worry for Pakistan. It could be that the merciless heat of the gulf sated his appetite for aggression and pace but the fast bowler is known to bounce back with great valour. Another one waiting in the offing is Jacques Kallis, the great South African all-rounder, who literally went impact less in the first Test.

It is of no doubt that the Pakistan cricket team had outplayed the Proteas in all departments of the game in Abu Dhabi, but the series is still on and the South Africans are still one of the best in the business. So good luck team green, don’t over think the last match, just make this one count!

He represented the Pakistan Juniors’ cricket team in the Junior World Cup held in England in 2000. He captained the Government College Cricket team for 3 consecutive years and is a free lance writer. Studied Social Sciences at the University of Cambridge and currently works as a Development Economist and a Management Consultant for an international donor based in Pakistan.