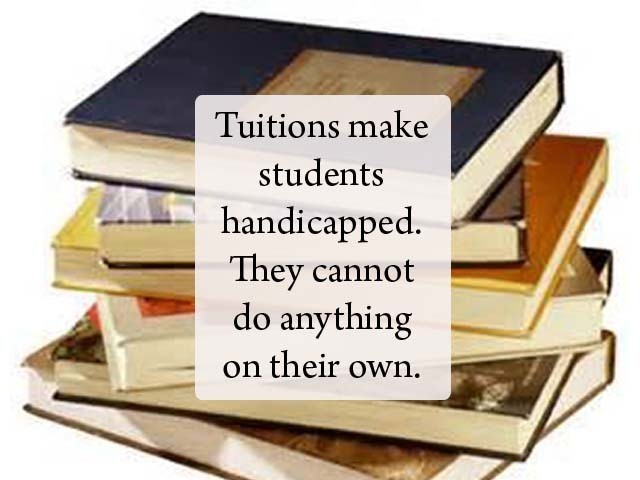 Students who are used to tuitions want to find short cuts in everything. They have never learned how to struggle and strive for something. PHOTO: FILE

I was quite disturbed to hear that Haroon Tariq – the student who secured 38 As in IGCSE – has opened up a tuition centre where he intends to offer paid tuition for O’ and A’ level subjects.

It is indeed sad that such a brilliant mind is encouraging a trend like after school classes. This article by no means serves to undermine the accomplishments of the aforementioned student, but to highlight the implications of the overall growing trend of private tuition in Pakistan, whose endorsement by Haroon is pitiful.

In my opinion, after-school tuition are a handicap, or put it more appropriately, an addiction for students. Once a child develops the habit of getting spoon fed by tuition teachers, his intellectual abilities begin to decline. He no longer strives to find solutions to the problems he faces in his studies, but instead looks towards the aid he expects to receive in the evening from the academy.

A line from the online advertisement of Haroon’s academy reads,

‘Your only job will be to revise the material; the extraction of relevant material is up to us.’

This is the worst form of spoon-feeding one can imagine and those falling for such taglines are committing intellectual suicide. It is through the practice of extraction of relevant materials and other such intermediary activities that actual learning takes place.

I remember studying for my O’ level Geography paper. The subject was not offered in my school (or any other school I knew), and thus it was impossible to find someone who had previously appeared for this particular subject’s examination. Yet, instead of going to a tuition centre, I went through the course syllabus and searched online for relevant books. After going through a number of book reviews, I finalised a couple of course books and bought them from the local bookshop.

I do understand that such measures of self-study are difficult and students can easily get confused – or worse, distracted. There were instances when even I became unsure of whether I was on the right track or not, but this where my true learning took place. After studying independently, I not only scored an A* but was also awarded Top in the World in Geography certificate by the CIE.

As a student who never succumbed to the pressure of after-school tuitions I can say one thing for sure; students who become accustomed to tuitions try and find further shortcuts and this habit continues even through university level.

Until a student realises that there is no option other than studying, striving and working hard on their own, they will never think that the struggle is worthy and will always take the easier way out. Working hard and seeing the results can change a person’s approach towards life. Allama Iqbal gives a beautiful comparison between getting end results through short cuts and through hard work stating that;

(The heaven, which was given as a gift to Hazrat Adam (AS) before the creation of this world, did not have that charm and beauty which a self-created paradise on Earth (through hard work) would have)

Another ‘package’ offered by Haroon was the;

This is a clear violation of the official CIE stance which says that O’ level syllabuses are designed on the assumption that candidates have about 130 guided learning hours per subject over the duration of the course. Furthermore, these kinds of convenience store ‘packages’ also serve as incentives to students be sloppy throughout the school year and just go for tuition for four months to cover the entire course.

After-school tuition are also detrimental to the health of students. Studying for eight hours continuously in school and then going to tuition centres in the evening is inhuman, to say the least. Nowadays, parents have even started sending children in primary school for evening tuition! They can barely talk yet and are already being thrust into the ‘big bad world of competitors’? I have relatives in my family who do the same and it is beyond my comprehension how this activity is relied on not just by students but by their parents too! When questioned, the usual response from parents is that they want their child to perform the very best in tests.

I have just one question for such minds. Do we want a nation full of brilliant little test takers?

Wouldn’t it be better if the students spent the same time in the evening playing sports, chit-chatting with their parents, or just reading some non-course books instead? This would not only help them maintain their social presence but will also aid them in their academic performance. A healthy body and mind can perform better than an overworked one and only an active mind can perform better. Tuition make your mind lazy; don’t encourage this dependency in students!