When we were too poor to afford Blue Band margarine 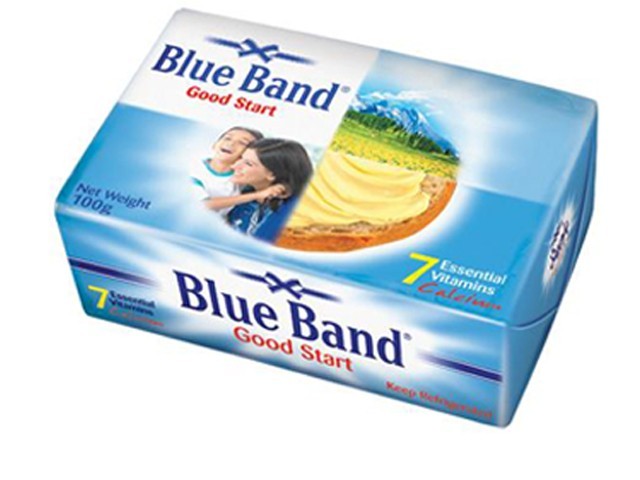 I knew that Rs 3 was not enough to buy Blue Band margarine but I had to have it. I could almost taste the flavour and smell the aroma. PHOTO: http://www.unilever.pk/our-brands/

I still remember the day that Blue Band margarine was introduced to Alamdar Bakery in my home-town of Quetta, Pakistan. The glossy silver packaging and the light blue printing stood out among all the other butter in the bakery’s refrigerator.

However, I refrained from taking an interest in this new product since I was well aware that my parents would not be able to afford it. I continued to consume the inexpensive Liaquat Makkhan for breakfast even after the older brother of the baker recommended Blue Band with great zeal; I consoled myself by thinking that he was just trying to improve his sales.

As the weeks passed, other friends also started raving about the margarine, but I just didn’t have enough money to buy it. Then one day, a friend of mine who was visiting from Lahore asked me to accompany him on a day trip to the mountains. I readily agreed since the mountains of Quetta are our pride and joy and their natural beauty is simply enchanting.

My journey to the mountains of Quetta

My friend asked me not to pack anything and appeared at my house early the next morning with two backpacks laden with food items. With him carrying one bag and me the other, we set off on our excursion.

Our journey started off well enough but then we came upon a pack of dogs. We tried to stay calm but the dogs began to circle us; they could probably smell the food we were carrying. We began to run but the dogs were fast and they kept catching up to us. Eventually, we stopped and began pelting them with stones. They persisted in trying to get close to us but eventually we were able to scare them off.

However, by this time I noticed dark clouds approaching from the west and I asked my friend to hurry up otherwise we would get caught in the storm. I remembered that there was a cave in one of the mountains and hence, we began climbing up to get shelter. The mountain was around 1,800 feet high and our heavy backpacks were slowing us down. We had hardly reached the crest when we heard a deafening clap of thunder and the heavy clouds gave way to rain. Struggling to see through the pouring storm, we rushed on.

As we struggled ahead, the rain turned into pelting hailstones, each heavier and more painful than the last. We had no choice but to cover our heads with the backpacks and move on. Soaked to the skin and hardly able to see ahead, we started walking down the mountain towards the valley because that was the only way to get to the next mountain on which the cave was located. I was getting worried now because the rain water had started to collect in the valley and sure enough, when we set foot on the flat plain, our ankles were submerged in water. My only thought was,

“This is the beginning of the flood; the worst is yet to come.”

I shouted to my friend,

“Run as fast as you can otherwise we will get caught in the flood!”

However, I saw that he was having a hard time keeping up with me. I shouted at him to throw away his bag because the weight was slowing him down. He let go of his bag and together we kept on running until finally we saw the entrance of the cave. Rushing in, we both fell to the ground gasping for air and thanking God for the shelter. Outside, the storm continued to rage and the frequent flashes of lightning lit up the inside of the cave.

After a few minutes, we looked outside and saw the clouds hovering above the mountain peaks while small waterfalls trickled down the mountain into the valley where they turned into a violent flood. I thought to myself that if we had lingered on the flat ground for a little longer, we would surely have been washed away by the torrential water.

A feast fit for a king

My friend unzipped the bag that I had been carrying and took out food. He told me that the lunch bag had been lost but we still had food for breakfast. Laughing he said,

“Let’s have breakfast now, before we lose this one too!”

I picked up the tea flask which was surprisingly still hot to the touch. As I poured tea, he handed me a medium-sized pack of Blue Band margarine along with home-baked naan, still dry as it was in a plastic bag. I couldn’t believe that the margarine that I had been dreaming about for weeks was now in front of me with fresh naan and hot tea! With beautiful mountains and waterfalls all around us — it just seemed too good to be true!

I peeled open the cover and instantly the rich aroma of margarine filled my senses. I spread some on my naan and took a bite. The richly coated bread slid down my throat and I closed my eyes to savour the moment and then took a sip of the hot tea. The combination was divine and I felt like a king enjoying a feast! My only thought was,

“Oh my God, what great taste!”

By this time I had become intoxicated by the delicious margarine. I forgot about the beautiful view outside; I knew my friend was rambling on about the rain, the waterfalls and the picturesque beauty but I couldn’t be less bothered. All I was thinking of was that I would never eat Liaquat Makkhan again and that I would beg my father to buy at least one small pack of Blue Band a week. I finished the whole pack of margarine and started eyeing my friend’s half-eaten one. However, he did not seem to get the message and packed his half-eaten pack of margarine away.

I cannot explain to you how eager I was to get home and plead with my father to buy Blue Band for breakfast. It was painful to stay in the cave until the clouds cleared and we could finally get out.

Upon reaching home, I asked my mother where my father was. She said that he had gone out for some work. Although I waited for a long time, he didn’t come home and finally I went to bed. All night I dreamt of that mouth-watering margarine. After a restless sleep, I woke up early and rushed to my parent’s room. However, my mother hurried me out saying that my father had come home late the night before and that I should let him sleep.

I thought about what I should do because I really wanted to have Blue Band for breakfast that day. I asked my mother for money and she handed me three rupees. I knew that wouldn’t be enough and asked her for six rupees more but she refused. When I insisted and threatened to throw a tantrum, she fetched some more money from her money tin in the kitchen and told me not to spend it foolishly. I kissed her hand and waited impatiently for the shops to open.

Around 7:30 in the morning, I took my bicycle, and pedaled furiously to the bakery. Reaching the shop, I parked my bicycle, secured it and rushed inside with my head held high. Almost jumping with excitement, I asked the shopkeeper for Blue Band margarine. I watched impatiently as he strolled slowly towards the refrigerator, wishing that he would walk a little faster. When he handed me the pack, I could almost smell the aroma and taste the margarine. I paid the baker and almost floated to my bicycle, my head in a daze to be clutching my very own pack of Blue Band margarine.

Upon reaching home, I asked my mother to get the tea ready while I rushed to the tandoor for freshly-baked, hot naan. While my mother laughed, I spread the margarine generously on the naan, took a big bite and closed my eyes to savour the rich flavour that engulfed my senses. That wonderful flavour and the heady aroma of margarine lasted all day. I didn’t even eat lunch because I did not want to lose that flavour of Blue Band in my mouth!

A twist of fate

My only wish at the time was that I could eat Blue Band every day but that was simply not possible since my parents couldn’t afford that luxury at the time.

As I think back to those days, I often laugh at how life is full of irony. Today, I live in the UK and can easily afford to eat Blue Band margarine every day, but my son says,

“Baba, I don’t like margarine. It doesn’t taste good.”

A quirk of fate, huh?