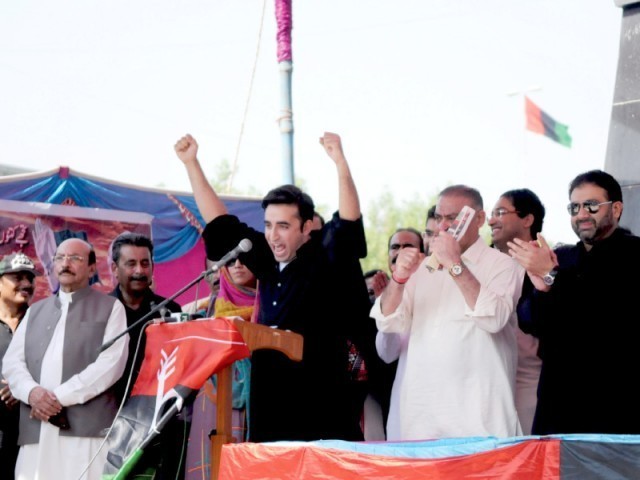 Bilawal Bhutto’s speech at Karachi’s Karsaz on the sixth anniversary of the unfortunate Oct 18, 2007 bombings has created quite a stir. As a son who lost a brave mother to rabid radicalisation, one feels that the emotionally-charged display of passion in front of an audience of die-hard jiyalas was all but natural, and perfectly anticipated.

Towing the line of populist politics introduced by Zulfiqar Ali Bhutto, Bilawal did a good job with a crowd that seemed to be only following half of what their 26-year-old chairman conveyed. His body language apparently conveyed the remaining half, complete with waving fists and suggestive eye-balling. Bilawal’s script-writers did what they were paid to do; sensationalised the return of the Chairman, now officially eligible to contest a seat in the National Assembly.

The speech itself somehow reminded me of the 2010 British historical drama film The King’s Speech.

And it reminded me of how dynastic politics still rules the roost in Pakistan. Democracy might have found its footing but electoral politics in Pakistan still remains a family enterprise, under the stranglehold of a few, mostly feudal families.

As an Oxford educated youngster entering the realm of politics dominated mostly by fake degree holders, I would’ve expected a shift from realpolitik and a more mature approach towards the teething issues Pakistan faces today rather than the usual lambasting of rival political parties.

Referring to PML-N, for example, Bilawal stated that PPP would defeat the ‘lion’ and that “the belly of the lion is filled with the blood of poor people!”

It seems as though populist politics in Pakistan  comes with the condition to verbally assault political rivals to establish supremacy. Living up to his Twitter persona of a born-with-a-golden-spoon college grad, Bilawal was determined to settle scores with long-time tsunami-swept rivals. He stated that PPP “will liberate the people from that storm,” and even pledged that his party was not ‘cowardly’ like the PTI.

The chairman’s  remarks contradicted the party’s official friendly opposition stance but we still expect PPP zealots desperately try to justify their Chairman’s position, even if it makes zilch sense.

This is not new in personality-centered politics of Pakistan where an intellectual like Asad Umar of PTI has had to backtrack on his statements multiple times to appease party leadership.

Pakistan’s political landscape has largely remained an oligarchy, with industrialists and feudal landlords ushered in with patronage of military rulers. However, now it seems to be slowly transforming and untangling itself from the stranglehold of a narrow power elite, which is heartening to see.

Bilawal and others of the clan should realise that their diatribes are now understood and debated upon in a completely different perspective, where rationality rules and sensationalism is out-ruled.

PPP’s stance on extremism and rejecting terrorism has, beyond doubt,  always been unwavering. However, action and not mere jingoism can restore peace in the country. Zamurd Khan’s heroism in Islamabad does not relieve PPP of its inability to draft an effective counter-terrorism policy in its 5 year rule. Banning telephone and internet services every now and then is not a long-term solution, and the ‘pappu bachas’ Bilawal refers to are not naive either.

Sporting Sindhi t-shirts and badmouthing rivals gets you a few re-tweets at the most, and alienates you from the rest of the country. We do not expect a 26-year-old to jump into policy making and constitutional reform, but a knowledge of the country’s dynamics and a sense of entitlement for the country is the least we expect.

The sense of dynastic entitlement that has been dominating Pakistan’s political culture is slowly diminishing and the youth of today no longer believes in political idol worship. This year’s election outcome should have made it clear!

The writer is a PhD candidate at the Pardee RAND Graduate School. His thoughts do not necessarily reflect those of the RAND Corporation, Pardee RAND, or RAND’s research sponsors. He tweets at @jalal_awan (twitter.com/jalal_awan)

Backpacking across Thailand - on a green passport!

Saudi official vs ASF: Who should apologise?