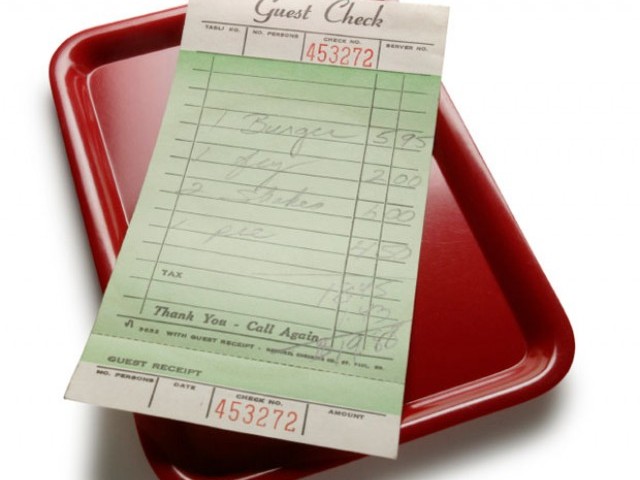 He asked for the bill before our food had even arrived. We all felt thoroughly confused as to what he planned to do with us that night.

A few days ago, a friend of mine got a job at a university and to celebrate the occasion, we decided to go out for dinner. Of course, it was going to be his treat. After a long debate over what to eat and where to go, we finally decided to have a buffet dinner at a restaurant close by. We decided the date and time and extended the invite to other friends as well.

There were going to be seven of us. I lived in a hostel with another friend and so we decided to go together. We reached the venue at 9pm. However, at the entrance we were told that there was no buffet that day since the lawn was closed due to the dengue epidemic.

Since we were already there and changing the venue at the last minute would have been tiresome, we decided to eat inside and order a la carte. All of us went through the menu and ordered what we wanted to eat. We knew that it would take about 30 minutes for our food to come, so we sat back and began to chat among one another.

But our friend, the one who was treating us, seemed to have other plans.

When the waiter had taken down all our orders, he asked him to bring the bill in advance. The waiter looked flabbergasted at his request and all of us looked at each other in confusion as well.

What was he thinking?

After all, it was normal for the bill to be paid after the meal. But our friend insisted and so the poor waiter brought the bill. It was about Rs 3, 500 (around US$30). We knew he would not be worried since he had gotten quite a lucrative job. While we were still trying to understand his actions, he got up and rushed to the entrance of the restaurant. At the door, he jerked his head and motioned for us to follow him.

Looking at the floor in sheer bewilderment and embarrassment, we scuttled to the door and left the restaurant, leaving the waiter and all other customers gaping at us in astonishment.

As we walked out, we struggled to find a reason for our friend’s peculiar behaviour. One friend suggested that perhaps the bill was too much and he wanted to treat us at a less expensive place. Another one thought that he had left his wallet at home and had been unable to foot the bill.

Our minds churning out different theories, we tried to talk to him but he was pacing ahead of us. Hesitantly, we asked him what had happened. When he did not reply, we even put our theories before him. But he remained silent.

By now we were getting annoyed and angry.

What was this all about?

Was he trying to insult us?

We warned him that we would completely boycott him socially if he did not come out with what was going on but he remained unmoved.

After walking approximately half a kilometer with us tagging along, he entered a dark alley. We looked at each other with some suspicion and a lot of trepidation.

What was he planning? Was he into some criminal activities? Was he doing something immoral here?

These thoughts were running through all our heads as he walked into the alley, and I am sure anyone would have had these thoughts if they were in the same situation. What was worse was that it was a dark night, there were no lights around and we seemed to be in a very desolate place.

We figured that we had to find out what was going on and we could not leave him alone. So we followed him, and as we reached the corner, we saw a light – probably a candle or a lantern – burning at some distance and some human silhouettes became apparent to us.

Were they children kidnapped by the criminals that our friend was working for?

Were they children used for begging and illegal organ transplants?

All sorts of ominous thoughts went through our minds as we moved further into the alley. We could now see faces under the light.

There was an elderly woman with a visibly ill man – probably her husband – lying on the floor. Further away, there was an infant without any clothes and an ultra-thin teenage girl, obviously malnourished.

As we approached, we heard them telling our friend that they had eaten nothing that day and that the infant was unable to sleep due to hunger.

We looked on as our friend took out his wallet, gave the woman Rs3,500 and left.

We looked at each other but instead of confusion and fear, this time our expressions were of shame and guilt. Our friend’s actions at the restaurant had spurred such evil thoughts in our heads; now we just felt remorse.

On the way back, we were all quiet. Our friend offered to treat us at a less expensive restaurant on the way. But we could not. We were not hungry anymore.

We walked back to our hostel and it was almost mid-night when we reached. We turned in without saying a word but I could not sleep that night.

I believe that instead of eating something very expensive, one can satiate their hunger with something less expensive and save money. I try to do this almost every day, but the money I ‘save’ this way remains in my own pocket. I had never thought of giving the money to someone else; someone who cannot afford a simple meal, not even once a day.

I look back at that night fondly and think of it as the best dinner of my life because it taught me compassion and love for my fellow beings. And every time I remember it, I thank my friend for teaching me this valuable lesson.