A bus ride with a convict, a drug dealer and an old lady 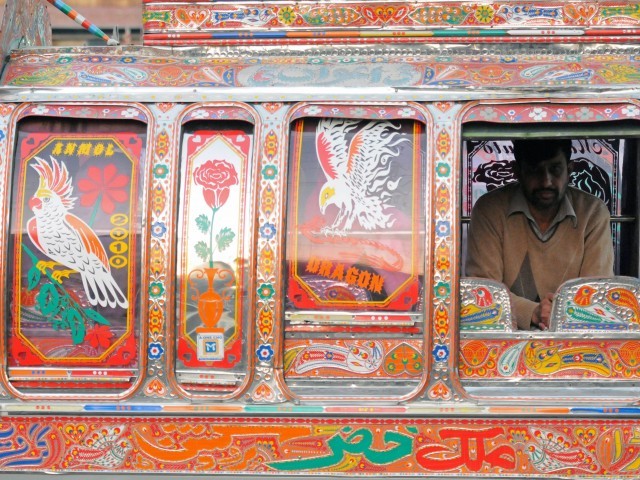 Travelling in a non-air conditioned, over crowded bus on the highways of Pakistan is not a pleasant experience at all. PHOTO: AFP

Travelling can help an individual understand different aspects of society and it also gives one a clearer perspective about the world. Having said as much, when I left Lahore to visit my home town Sialkot, I did not have the faintest idea as to what was in store for me!

As I entered the vehicle, I saw that there were only a few seats occupied. I thought to myself that it would take at least 45 minutes for the bus to fill up. Then, spotting a good seat I sat down, feeling excited about the journey ahead. The only drawback it seemed was that the seats in the coach were too close together, so it was difficult with my height, to adjust my legs. Nonetheless, I managed and was ready for the long journey ahead.

To my surprise, the bus driver started the engine and we were on our way in just a matter of five minutes! I looked around to find that most of the seats were still empty; however, I consoled myself that the driver was punctual and began to calculate how long it would take me to reach home. However, my optimism was short-lived and the bus stopped suddenly at a station where a few more passengers boarded. I rationalised that that stop was logical since the bus driver couldn’t afford to take an almost empty bus all the way to Sialkot. Once all the seats were occupied, the bus resumed its momentum towards my home town. By this time, I could almost smell the welcoming aroma of my house.

Just then, the vehicle stopped again. Not only was I extremely surprised at this stop, frankly I felt a little annoyed. I wondered to myself,

“Why is the driver stopping now when the bus is already full?”

The door opened and the conductor began to announce his route so that more passengers would board. As we moved on, the same thing kept happening. The driver kept making stops at every legal and illegal point and passengers kept boarding and disembarking. By this time my frustration was building up and wearily I added yet a few more hours to my estimated time of arrival.

Then while I was inwardly cursing the conductor, I realised that an old lady was standing just beside my seat and looking at me pointedly. I felt bad that she was standing while I sat so comfortably, but I really didn’t want to leave my seat. However, in the end the ‘Good Samaritan’ in me offered her the seat. I noticed that she took my seat very quickly, almost as if she knew all along that my conscience would urge me to give it up. However, what annoyed me was that she didn’t show any signs of gratitude – not even a simple ‘thank you’.

So there I was in the non-air conditioned, over-crowded bus, standing – well, stooping really because the roof was not high enough for me. Needless to say, by then I was extremely irritated not to mention in pain; try standing with your head bent for hours – trust me, it is not very pleasant! However, apparently, this was not the end of my miseries. Just as we were crossing Gujranwala, I thought I smelled cigarette smoke, and sure enough, a boy sitting nearby had lit a cigarette. Within minutes, others around him followed suit.

Just when I thought that it couldn’t get any worse, a person boarded the bus, holding a bag filled with bottles of cream. Soon the bus reeked of smells like Iodex or Vicks. He began to list the numerous benefits of the creams and actually managed to sell it to five passengers. I could not help thinking that his sales tactics were much better than that of an MBA graduate, since he managed to make sales within a matter of minutes and in such difficult circumstances.

The bus, however, now smelt like a mix of smoke and Vicks.

A few kilometres on and we stopped again. I saw the woman who had taken my seat step out of the bus and without wasting any time, I made a beeline for what was rightfully mine. Relief flooded my aching body as I thanked God and settled into my seat. However, just as I was about to doze off, a loud and vulgar melody began to echo from a speaker right above my seat! This deafening music was the driver’s choice of course and I was forced to listen to it at full volume all the way home.

Just as I was thinking that boarding this bus might have been the biggest mistake of my life, a boy came towards my seat and put his hand in the pocket of the seat next to me. To my absolute shock, he took out a packet of hashish and strolled towards the door as if this was the most normal thing in the world. What was worse was that no one else seemed even slightly concerned!

Still reeling from shock, I felt a hand on my shoulder and stale breath invaded my nostrils. A man who looked to be in his early 30s stood behind me. He beseeched,

(Brother, can I call my family from your cell and ask them to send some credit on your phone?)

I looked at him in confusion since I just couldn’t understand what he was asking of me. Undeterred, he continued,

(And then you can give me the amount of credit in cash.)

To say that I was at a loss for words would be an understatement. I just couldn’t understand why he had boarded the bus if he had no money.

That was when he added,

(Actually, I just got released from jail and have no money to travel. Can you help me?)

On hearing the words ‘released from jail’ my heart skipped a beat. I was stunned and a lifeless smile appeared on my face. Weakly, I replied,

(I have no money; I am going back home too.)

Even if I hadn’t known better than travelling in a non-air conditioned bus, I did know that in Pakistan, you do not give your phone to a stranger and especially not a stranger who has recently been released from jail!

At last, after what felt like an eternity, I reached my stop. I hurriedly moved towards the door, pushing other passengers out of the way and leapt off the bus as though it were on fire.

They say “never say never” but after this experience, I say,

“Never again. Never again will I travel by bus in Pakistan.”

An MBA from FAST National University, Lahore, he currently works in his family business in Sialkot. He is an avid reader and tweets as @ahsanfraz1 (twitter.com/ahsanfraz1)

Before blocking NATO supplies, take a look at the repercussions for Pakistan's economy!