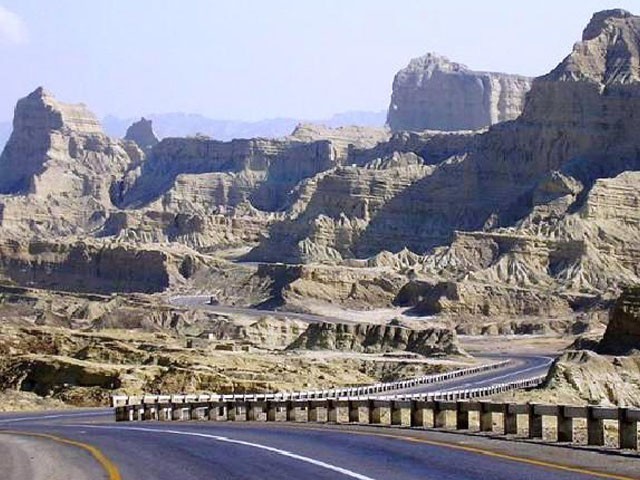 Driving along the Makran Coast, it is easy to forget that you’re just a couple of hours away from the hustle and bustle of Karachi. PHOTO: Jawad Khan

Pakistan has always been hailed as a paradise for adventurous souls. From the valleys and mountains of Khyber Pakhtunkhwa to the deserts and beaches of Balochistan, we have some of the most unique combinations of natural beauty in the world.

Yet, the more I travel across different regions of this beautiful country, the more I realise how little I, like many of us living in the cities, know about the gorgeous scenery and breathtaking views that exist all around us, just waiting to be explored.

The reasons for this hesitation are obvious. Balochistan, where the coastal highway is located, doesn’t usually feature in the news positively. Secondly, the highway is located quite far away from the centre of Karachi – at a distance of 250 kilometres and a drive of four hours, to be precise. Hence, our main concerns were about safety and the reaction of the locals.

Our first concern was the security issue. After all, we are all aware of the kidnappings and target killings that happen regularly in these areas. However, after a detailed discussion with a friend, who drives to Gawadar twice a month for his pharmaceutical distribution business and who happens to be a non-Baloch, I learned that the problem areas were deep into Balochistan and not around the coastal highway. In fact, as I later found out, the whole route up to Gawadar is under the surveillance of coast guards and the Pakistan army.

Our group consisted of 12 people, none of whom had ever been to the Makran Highway before, so the excitement was palpable. We kicked off our journey at around 4:30 a.m. The weather was absolutely stunning with light drizzle and a cool breeze. Around 2.5 hours into our journey, we finally hit the Makran Coastal Highway and the real fun started!

A stainless carpet-like road surrounded by mountains with camels sauntering on both sides of the track, the Makran Coastal Highway is sheer joy to drive on. It is not difficult to forget that you’re just a couple of hours away from Karachi. The freshness of the air, and the cleanliness of the environment, creates the setting for a long, in fact, a very long drive.

Other than the amazingly smooth road, the Makran Coastal Highway bears stunning natural rock formations on both sides and it’s a pleasure to watch these as you whiz by. For those who have seen the American Grand Canyon and the Egyptian Pyramids, you can form a rough sketch in your mind of the scenery.

No, this is not Egypt! PHOTO: Jawad Khan

Another major attraction is the Princess of Hope – a natural rock formation, named so because of its resemblance to the silhouette of a standing woman. Princess of Hope was given its name by the Hollywood actress Angelina Jolie on her trip to the coastal highway in the early 2000s. Along the way, you’ll also come across the Hingol River and the Hingol National Park.

We finally reached the Kund Malir beach at around 10:00 a.m. after a five hour drive. Don’t worry; we made several stops for fuel, breakfast and prayers. Needless to say, the drive was worth it and the view was simply breathtaking. We’ve all heard about the beaches in Thailand and the Caribbean, but let me tell you that this beach was not far behind. I will let the pictures speak for themselves!

Kund Malir beach – no one for miles around. PHOTO: Jawad Khan

The water, as you can see, was crystal clear and there was no one around for miles except for a few fishermen. I am not exaggerating when I say that this was an ideal tourist spot and a real treat for beach lovers.

Furthermore, we found that Balochis, like all Pakistanis are hospitable by nature. Although we didn’t encounter too many people on our way to Kund Malir beach, on the beach itself, we met tens of fishermen who were extremely friendly and generously offered us fresh crabs – which we politely declined.

Just when we thought we had seen everything, we found this mysterious cave. PHOTO: Jawad Khan

Although the security provided by the coast guards and the hospitality of the locals helped abate our fears, we were advised not to travel after dark and hence, we packed up for the return journey at 2:30 p.m.

However, before setting out, we filled ourselves up with some delicious Chicken Karahi that we had made ourselves.

No picnic is complete without Chicken Karahi! PHOTO: Jawad Khan

Our ride back home was equally enjoyable and thankfully, we were back in Karachi just as the sun was setting.

Since the journey is quite long and there are no shops after Zero Point (at the start of the Makran Coastal Highway), you should plan ahead and be well-equipped with all necessary arrangements.

Here are a few things I would recommend:

With a little planning and a craving for adventure, this trip will not be one you’ll forget soon!