Why do we have ‘ladies parks’? Can’t trust ladies with men? 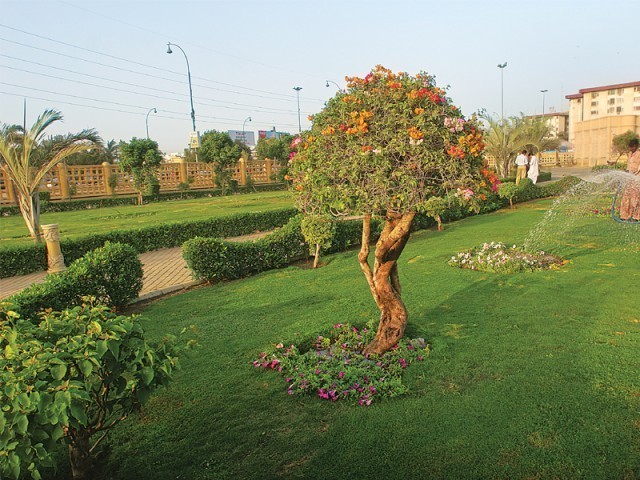 Parks in Peshawer are increasingly being used for fitness purposes, by men and women alike. PHOTO: FILE

Going to work in the morning becomes interesting when you start to notice things that have changed over time in the typically conservative environment of Peshawar.

One such change has been the increasing use of parks and roads in the residential areas of Peshawar, for fitness purposes. It is so encouraging to see the morning joggers and walkers including bearded men, veiled females and the youth. Out of these, the most promising sight is the increasing number of females that can be seen in the early hours of morning, wrapped in big chaddars or abayas, making an effort to stay fit.

Even if they just take a brisk walk, they are clearly making a statement that they are not suppressed by their veil and that they have the right to choose. These women can be seen in groups as well as alone, which is another positive sign since it means that they don’t feel threatened by venturing out without a companion.

Another new phenomenon – which I do not find as appealing – is the number of ladies’ parks cropping up in Peshawer; here only women are allowed.

This was such a new concept for me that I looked it up on the internet. In my search, I found out that this was not something restricted to Peshawar; in fact, ladies’ parks have been established in Lahore, Gujranwala and Gujrat.

As a firm proponent of female rights and empowerment of women, I found this concept strange and in some ways even belittling. The mere existence of these parks made it seem like either the government and society cannot ensure the security of women, or that our culture is too controlling. In both cases, to me it seemed as though women are being put in golden cages to give them the ‘illusion of freedom’ while keeping them confined in actuality.

However, looking at it from a different angle, I realise that perhaps as a community we have started to treat women as equals and are paying attention to their needs by providing them facilities so that they can focus on themselves. Perhaps, we are ready to allow them to have some time dedicated to their own well-being.

After all, these parks allow women to move freely and interact with like-minded women. They are able to exercise, walk, jog and socialise as they please. In a patriarchal society, these venues provide women with much-needed physical as well as mental stimulation. In addition, not only are these parks a necessary respite for women who are bound by the norms of a male-dominated society; they also provide them relief from gawking men who seem to have X-ray visions and cannot help but snigger and whistle at any kind of female form.

As an eternal optimist, I would like to think that the reason for the establishment of ladies’ parks is the latter. It gladdens me to think that women are not confined in these parks, but gain more liberty and confidence in a place where they can be free from the rules set by men and society. However, even though establishing these parks is a step forward and a much-needed outlet for women, as a society we need to progress to a level where women are not objectified or harassed even in the open society.

Respect for women does not simply mean shrouding them in miles of cloth or confining them to restricted areas; it also means interacting with them just like one would interact with a man. In order to truly liberate and protect women at the same time, society needs to learn to stop treating women like objects; men need to listen to and respect their opinions as well as understand their feelings and emotions.

I know that we have a long way to go but acknowledgement of the problem is a start. I just hope that establishment of ladies’ parks will not take us in the opposite direction, that is, increase isolation and confinement of women.

An academic who resides in Peshawar. She has recently completed her PhD in Computer Science from the University of York, UK.

From Peshawar: A plea to the government