Peace talks won’t work. If they kill two, we must kill four 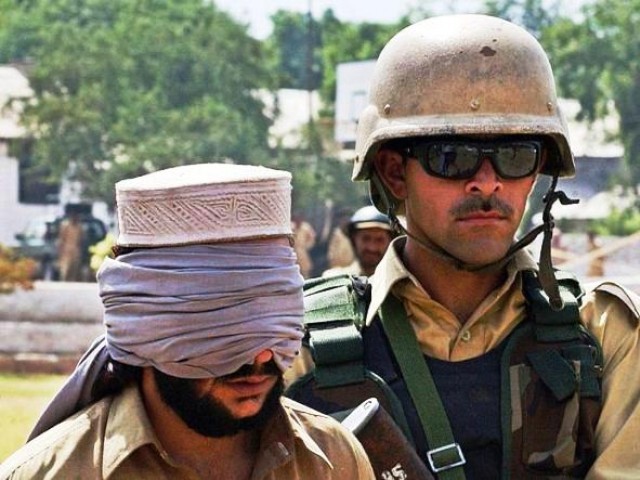 It’s Tehreek-e-Taliban Pakistan and every Pakistani knows that the Pakistan army, Asia’s third and the world’s fifth largest, can obliterate these murderers. PHOTO: AFP

The year was 1989, I can’t remember the month though, but it was winter. I was 13-years-old, studying in Aitchison College Lahore. My late father, a brigadier of the Pakistan army, was commanding the Tenth Corps Artillery which was headquartered at Chaklala, Rawalpindi.

I used to live in a boarding facility at the time and would visit our military home during vacations. I can’t help mentioning that those were very peaceful times, although it sounds a repetition in our country these days – everybody who is aged 30 and above says that quite often. I wish we could rewind or invent a time machine to go back and just live in those times for a fortnight. It would be a peaceful vacation. No suicide blasts, no target killing, no drone strikes …

Since I was born in a military family, I can say with some confidence that I know the military mindset better as compared to someone who has no direct connection at all. There is a very strong sense of unity in military personnel, from the top ranks down to the soldiers. Think of it as being a big family. The sense of looking after the other is very strong. Officers and soldiers often go the extra mile just to help one another.

Now back to 1989. I gave the above ‘preface’ just to put my point in perspective; I was at our Chaklala Cantonment house for vacation. My father had a study where I often went to find a book to read since I had this habit of reading instilled in me by him since the age of eight. He was a father and a friend too, which is unusual in Pakistani fathers.

One evening I peeped inside as usual, my father was talking on the phone and I started looking for my book. Dad’s conversation continued and gradually his tone became angry and his voice grew louder.

Perturbed, I decided to scurry away before he noticed my presence and made his usual statement,

Normally he would be soft and smiling but in that moment, he was angry. I quickly got hold of a book and left the study. However, the words Dad delivered on the phone in those five to six seconds still send a chill down my spine, all the while making me extremely proud, to this day.

“That’s enough. Do it. I want at least four of them down. The commander agrees.”

It wasn’t clear to me at that time what he actually meant, but the anger and authority in his voice kept the curiosity in me burning for the next couple of days. Finally, when he was in a better, jollier mood post a round of golf, I put the question forward.

By the look on his face I could tell that he was a bit taken aback that I knew and the fact that his statement had stuck with me. He asked me how I found out and why it interested me. I told him the honest truth. He paused for a few moments, looked at me intently then smiled,

“Promise me this will remain between you and me.”

I laughed and gave my word. This often happened between us and I now realise that it was his way of instilling confidence and a sense of responsibility in me. Forgive me Dad, I am breaking my promise and sharing this with fellow Pakistanis but my reason is solid. I believe Pakistan is facing an existential threat today and many fellow countrymen are spreading too much confusion. By sharing this information I want to help the sane lot who are trying very hard to dispel the confusion but are doing so in vain so far.

“Two of our soldiers were killed by enemy forces; we are going to kill four or more.”

I was taken aback by the force of the sentence.

He explained that the army takes the loss of life caused by the enemy very seriously and cannot afford not to respond for two basic reasons; one, the concerned unit feels they have lost a family member and secondly, if possible, you have to inflict at least double the damage so that the enemy knows what’s coming the next time they think of pulling such stunts.

It was simple logic – make the enemy afraid of your capability.

Sadly, today, I see the reverse effect happening. The enemy assassinates a major general and our former sports hero leader says “let’s talk to them”.

I hope and pray that the Prime Minister, on his return from the US, does what I sincerely feel he needs to do; the “four for two” formula will succeed.

It’s Tehreek-e-Taliban Pakistan (TTP) and every Pakistani must know that the Pakistan army – Asia’s third and the world’s fifth largest – can obliterate these murderers.