Will Nawaz Sharif be able to handle Narendra Modi? 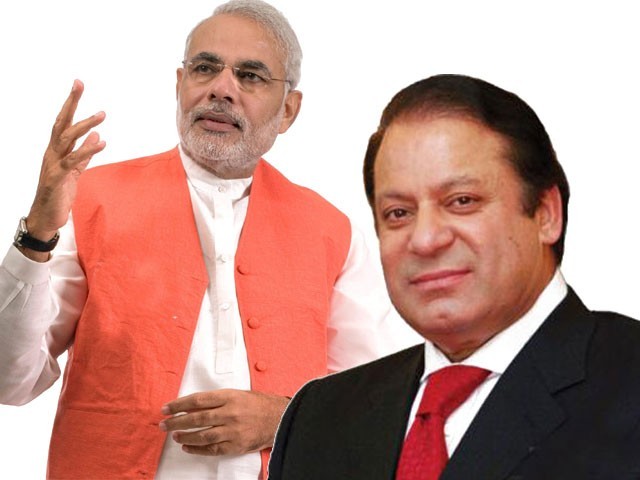 It may be interesting to see a contest between Pakistan’s more mature and calm PM Nawaz Sharif versus the maverick and flamboyant Namo in the coming years.

On the evening of September 17, 1950, Damodardas Mulchand Modi and his wife Heeraben would have probably never thought that their third born, Narendra Modi, will one day challenge the powerful Nehru Dynasty and vouch for the office of Pradhan Mantri (prime minister) in one of the biggest democracies of the world, India.

The rise of Namo (Narindra Modi) is spectacular as well as mind boggling. It shows a change in Indian politics, where a self-made tea boy running a tea stall at a small bus station in Vadnagar has risen to become the Chief Minister (CM) of Gujarat.

Namo is the household name for the Indian politician, from Mumbai to New Delhi, and his doctrine is gaining ground with every passing day. His ekla chalo (going alone) slogan and past records of taking Gujarat state to new heights of development is becoming popular with the Indian youth.

India’s mood has undergone ‘modification’ in last five years or so. As the time ticks ahead towards 2014, the public is increasingly inclined towards change, especially for good governance and getting rid of corruption. In a recent survey report (May 2013) conducted by Fraud Investigation and Dispute Services, Justice Kamleshwar Nath, Chairman Transparency International India, had the following statement to make about the issue of corruption and bad governance in India,

“Corruption in the country continues to loom large and tears into the fabric of governance. There is corruption in all spheres and common people get adversely affected in their day to day existence. Corruption is growing by leaps and bounds in India. As the nation grows, the corrupt also grows to invent new methods of cheating the government and public.”

Four major areas of concern and interest for the common Indians include the state of Indian economy, corruption and bad governance, communalism and personality factor. Modi is expected to deliver better in three of these four areas, with less emphasis on the issue of communalism, as his last three stints being CM of Gujarat has demonstrated.

The rise of the “tea boy” has also been largely helped by the shenanigans of Congress led United Progressive Alliance (UPA) government. There have been regular allegations of misrule, appeasement, and corruption topped by mega scams. Despite Congress’s efforts to project Rahul Gandhi as the new young stalwart of the Nehru Dynasty, Rahul’s stature against Namo is like comparing a zebra with an elephant. As stated by Firstpost Politics,

“A research firm, GFK’s survey in 12 Indian cities for CNN-IBN shows that the numbers supporting the Gujarat chief minister as the next PM are more than twice as large as those rooting for the Gandhi scion. The younger they are, the bigger Modi’s fan following. The survey found that 40 per cent of the younger respondents (18-25 years) supported Modi over Rahul Gandhi — with Gandhi securing only 13 per cent support”.

How will Modi’s persona affect Pakistan?

It may be premature to draw conclusions seven months before the people of India vote for the Lok Sabha (parliament) but Pakistan must watch Modi’s gait and gestures with an eagle’s eye. Modi is an astute politician, who has the ability to outsmart rivals and peers with an amazing sense of timing. Right from his early days as a maverick member of the Rashtriya Swayamsevak Sangh (RSS), his rise has been attributed to outsmarting others. He was the main person to outwit the old guards, like Shankarsingh Vaghela, after siding with Keshubhai Patel in the late 80s. Even recently, he outmanoeuvred Lal Krishan Advani in a disastrous electoral defeat.

Can a straight forward Nawaz Sharif take on the ultimate manoeuvre master Namo across the table?

Modi carries his historical baggage of the 2002 Gujarat violence and the Godhra incident; his act of moving burnt bodies of the religious workers from Godhra to Ahmedabad and inflaming the anti-Muslim violence riot is still fresh. He is also blamed for the Gulberg society massacre in Ahmedabad, when frenzied Hindu mobs ransacked and burnt more than six dozen houses and killed over 60 Muslims including Congress Member of Parliament Ehsan Jafri. The cases and investigations against the sitting government of Mr Modi are still pending with the Indian agencies and courts.

For Pakistan, to reconcile with Modi as the prospective prime minister of India could only be possible if Namo sheds off some of his Hinduvta agenda and makes an effort to cool down Muslim sentiment within India. Modi may have to pull a Bajpai here, as Mr Bajpai’s journey of Minar-e-Pakistan and developing ‘chemistry’ with Mian Nawaz Sharif was taken very positively on both sides of the great divide.

Can Pakistan handle him?

Namo is a vegetarian and a workaholic, has remained CM of Gujarat for four consecutive terms since 2002 and is officially a bachelor; however there are reports that Modi was married to a school teacher from a village in Banaskantha at the age of 18. The story may have some credibility as Namo has never rejected it. Recently Mallika Sherawat raised a small controversy by wishing Namo on his 63rd birthday and labelling him ‘the most eligible bachelor’. As per her own words,

“He is smart, progressive and often misunderstood, like me”.

Pakistani Foreign Office may have to keep a regular dossier on Modi so that the finer aspects of his personality are taken care of and Pakistani media avoids controversy in developing strong but negative perceptions about him. Indian media went overboard in making comments about the dress codes of our ex Foreign Minister Mrs Hina Rabbani Khar, when she visited India and almost lost the objectivity of her visit as a diplomatic discourse. Unfortunately, Mrs Khar was seen more as Miss Gucci and less as the foreign minister of Pakistan.

If Namo gets elected, it may be interesting to see a contest between Pakistan’s more mature and calm Prime Minister Nawaz Sharif versus the maverick and flamboyant Namo in the coming years. In the post 2014 Indian Elections, Pakistan’s ability to handle Narindra Modi will be the most important challenge for South Asia and could become a game changer in this part of the world.

A freelance columnist for the Herald newspaper in Zimbabwe who is working on socioeconomic and political issues confronting South Asia and Southern Africa as well as Cost of the Long War in Afpak region.

Financial fraud in the Virgin Islands: Money laundering by the filthy rich